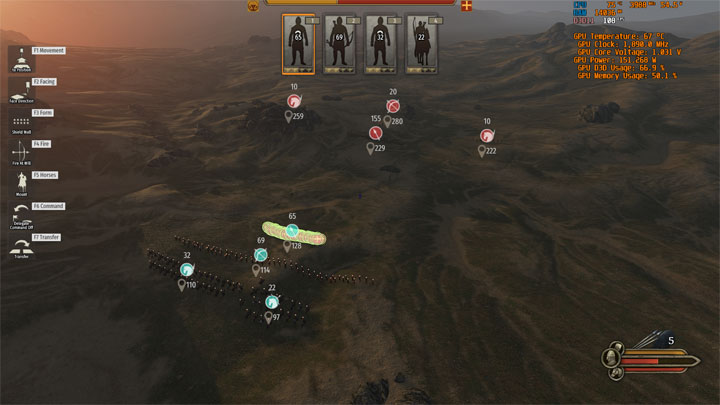 RTS Camera is a mdo for Mount & Blade II: Bannerlord, created by  LiZhenhuan1019.

Issue orders in RTS camera as if you are playing Total War, control troops after you die, toggle slow motion, etc.

A mod for Mount&Blade Bannerlord that provides features like rts camera, controlling troops after you die, etc.

Control ally troops after you die.

Because supporting them may cause the mod crash after beta update and break compatibility.

Undead mode. HP of All agents will not change after switched on.

Copy `Modules` folder into Bannerlord installation folder(For example `C:\Program Files\Steam\steamapps\common\Mount & Blade II Bannerlord - Beta`). It should be merged with `Modules` of the game.

Or use Vortex to install it automatically.

Then play the game as usual.

After entering a mission (scene):

Press `O(letter) (by default) to open menu of this mod. You can access the features of this mod in it.

Or you can use the following hotkeys by default:

Press `F` key or `F10` key to control one of your troops after you being killed.

Or if you rebind the key and forget what you have set, you can also press `Home` key to toggle UI, which always works.

How to play in rts camera:

In a mission, press `F10` to switch to rts camera.

Your player character will be added to the formation chosen in mod menu.

Use `shift` to speed up camera movement.

Left click on the ground and drag to change the position, direction and width of the formation you selected.

Switching to RTS camera may cause crash later in siege.