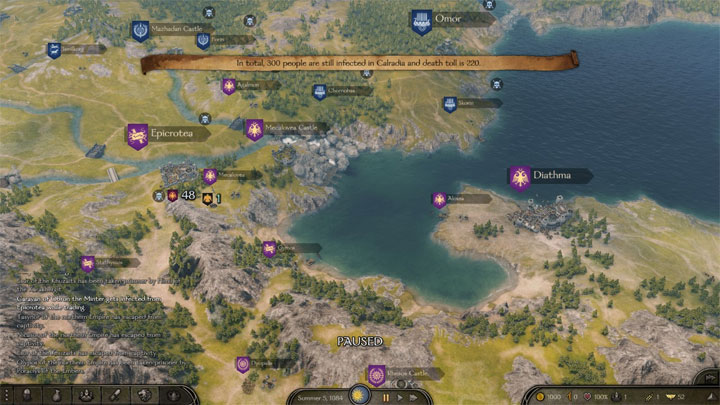 Plague and Diseases is a mod for Mount & Blade II: Bannerlord, created by Bloc.

This mod adds Plagues and Diseases into the game. Currently, it adds 7 different diseases with different contagiousness rate and death rate. Please check the thread for all explanation.

"That disease entirely stripped vills, cities, castles and towns of inhabitants of men, so that scarcely anyone would be able to live in them. The plague was so contagious that thous touching the dead or even the sick were immediately infected and died, and the one confessing and the confessor was together led to the grave .... " - Friar John Clyn, August 1348, About Black Death

This is P&D mod. It adds Plagues and Diseases into the game. Currently, it adds 7 different diseases with different contagiousness rate and death rate. Please continue to read if you want to learn more about the mechanics. I did this mod for myself, so it's even miracle that I'm releasing it - because I had no intention of it. It's written more or less in 3-4 days, so expect bugs.

I know many of you, including me, was asking for some random events and slightly more complex world mechanics. Hence, I decided to make this mod. In a nutshell, it adds plagues and diseases into the game. However, I tried to make this effect as visible as possible, so it's affecting a lot of stuff under the hood. I will explain them below.

In Ancient and Medieval times, life wasn't always great. There are a lot of examples when diseases and plagues disrupted daily life - even led Empires to collapse or take a big hit. Diseases were a daily part of Medieval and Ancient life. They weren't too major, or too contagious. For that, I also added a few less contagious diseases. But there were also plagues, that impacted widespread of people. Here are a few examples:

Mod comes with various diseases in it. I will add them as a table, but later I will explain each of them separately to make sure everything is clear. Even though I wanted to be accurate about their impact ( rates etc ) I had to tune them in for more playable gameplay. So some damages/probabilities might not be correct.

Each disease has it's own indicator for the parties. You cannot tooltip them, so you kinda have to memorize it. Or watch out for news. It's also good because as long as you are not educated you wouldn't know the diseases in real life either. You will see them on parties and settlements, as well as the hideouts.

I will also try to add some lore-like information in explanations. Just to make them sound more authentic and realistic.

About: This is far most the deadliest disease for the Calradia. It is contagious, and the kill probability is high.

In late 900's, it has been reported that Vlandia suffered from this disease, which led its armies to retreat to the mainland, granting Battanians a chance to take those lands. Vlandians never forgot that disease, and it's still inside their folk. See Vlandian Tapestry About Black Death

About: Nordland, also known as Jumne, is a land located to the far north of Calradia, beyond the North Sea. The land is said to be icy and is the home of origin for the Nords and Sea Raiders. Jumne Flu is known with this land because of its characteristics are similar to the common cold. And since Jumne is quite icy and cold, Flu is named after that land. However, this disease can happen in almost anywhere in the Calradia.

About: The origin of smallpox is unknown. Smallpox is thought to date back to the Darshian Empire around the 3rd century. It's not too deadly but still puts a really bad mark on people, also known as Darshin. Because of it's characteristics, it affects mostly poor people.

About: Morbus Gallicus as it's called in Empire times, is a bacterial infection. The disease starts as a painless sore. Syphilis spreads from person to person via skin or mucous membrane contact with these sores

About: Geroia is a land located outside of Calradia, it's famous for its heroes. However, it's also known with its Typhus. Not much know about its main source or exact location in Geroia. But Geroian traders have a high probability to bring this disease to Calradic people. It's not known or documented whether Geroian people know the cure or not.

About: Calradic Measles first spotted and identified by Aserain Surgeons. It was known as Aseraian Spots back then, but after the breakout, it took the name of Calradic Measles. It's less contagious than Black Death and it's damage isn't too high, but once it wounds someone, it has high chance of killing.

About: There is nothing new about this disease. Throughout the years, people always suffered from it. It led sieges to get lifted and armies to route.

I think its time to explain game mechanics and how these diseases arise/eradicated. If you don't like calculations and just want to dive into mechanics, go ahead and ship this.

Each disease has it's own death rate and damage. If your party or any party infected, each hour, it will check and wound some of your troops based on its severity. i.e. flu doesn't cause too many issues for big parties. This is completely random, meaning that, your fancy T5 units can get it too.

At the end of each day - it will calculate the probability of death for each wounded unit. It can also kill healthy units too, but this is an extremely low possibility. You and other heroes can die too. If you have Triage Tent or Physician Of People perks, you can save your heroes - your companions won't be affected by this. Or if you have Cheat Death perk, only you can be invincible.

If your settlement ( village, castle or town ) infected with a deadly disease, then once you enter the city, you will hear death sounds and you will see dead animals, people on the roads tossed like a rotten tomato. You will also realize that your colour grade is shifted towards something greener. These are all visual impact of the disease and creates immersion.

How are diseases starting?

Every 10 days, the game checks whether we have an ongoing disease outbreak or not. If not, it's triggering a new disease. However, this doesn't mean that every 10 days, you will see a disease pop up. It' basically means that it will trigger the event. Rest is up to your luck. What does that mean? It means that, even if your random settlement selected, it's very likely that perhaps you didn't get any disease on Calradia at all because you are lucky. Once the trigger happens, the following checks are executed

Pick a random settlement. This can be a town or castle. In either way, this property should have less Prosperity than 3500. Otherwise, the city/castle is too prosper to cause disease. If it's a town, it shouldn't have more than 250 Food Stocks or it shouldn't have Aquaducts built. These are sanitation precautions. If you want your settlement to be safe, built Aquaducts or keep your Prosperity/Food Stocks up.

Check if the settlement is unlucky enough to get a disease. It basically rolls the dice and creates that disease.

If all checks are okay, notify the user with location and start tracking the disease. You will also see the indicator on your map.

How to prevent diseases or deaths?

This is up to several factors. By disease prevention, there is nothing you can do for your party. But for cities, you can build Aquaducts. However, it can still get the disease from caravans and other entities. You can make its impact less significant with the mentioned buildings above.

How do disease spread?

Diseases spread in various ways. You don't get the disease right away, but it's dependent on its contagiousness level.

- Fighting with an infected army - or infecting someone with battle

- Entering an infected settlement ( same goes for castles, even if they keep you wait on the doors, you are still around that region ) - or infecting a settlement

How do you recover from disease?

Each disease has it's a timeline which decides the host sickness. They are real values and can be seen in the table. It doesn't matter what you do after you are infected. So you need that period to ends. Once you are infected you cannot get infected twice( meaning that your infection first time won't get reset with encountering another person/city) but once you are recovered, you can still get infected. You have to suffer casualties meanwhile. For cities, this is hard to endure, since they cannot block trading and armies coming through. For parties, it's less important.

What about snowballing and balance?

I made several tests and I didn't see anything indicates that this mod increases the snowballing rate. In matter of fact, as far as I can see, it even makes snowballing more balanced. Here is a small test till 1100 ( Although this test isn't entirely reliable since I also made changes along the way )

I have witnessed several times that armies lifted sieges due to outbreak - because their soldiers were torn apart with the disease.

If you don't want to wait and dive into darkness, you can use the following

Left Ctrl + Left Shift + S ( After CTRL+Shift, tap S - I think it's easier ) - This will raise a disease in a random location instantly. Don't abuse it.

CTRL + I - This will give information about all the diseases.

NOTE: This mod changes your save game. I haven't witnessed any instance when it breaks the game. You can add this mod into the game any stage of the game you have without any issue or any time you can click and disable it. The game should work fine.

However, it can create issues in the future. I don't guarantee anything. Use it at your own risk.

Extract into   bannerlord\Modules\ and activate in launcher.