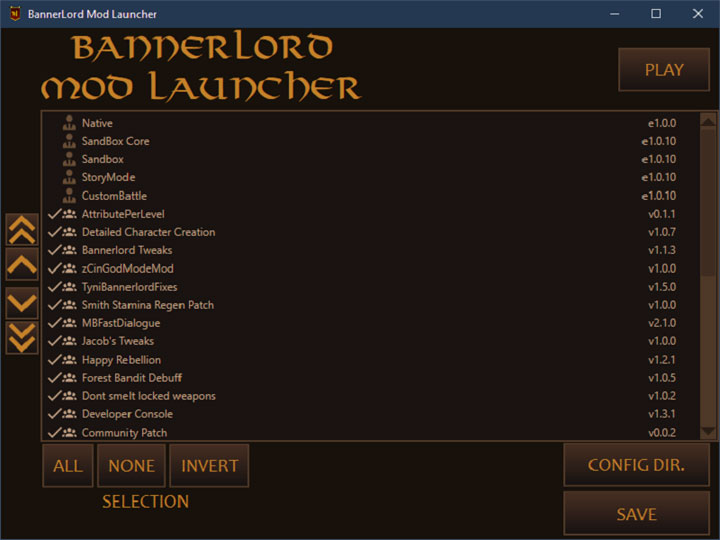 Can read/write your LauncherData.xml, without breaking compatibility with the standard launcher.

Supports only single player for now.

Will try to unblock any files referenced in the DLLName or Assemblies section of SubModule.xml for enabled modules (when you run the game).

Extract to your main folder Steamapps\Common\Mount and blade II Bannerlord\ (Note: Not the main .exe folder)

Create a shortcut on your desktop to the new launcher.

Upon first load, if it asks for your Bannerlord folder, point it your install directory: Steamapps\Common\Mount and blade II Bannerlord\

Without touching the original five modules, adjust your mod sorting using this guide? ?as a guideline for proper mod sorting.

Sorting incorrectly WILL result in crashes and instability so don't blindly hit the sort button and play.

Hit "Save" and then "Play" to launch the game. Hitting Save will automatically backup your current and previous mod load-out

As long as your mods have no issues, the game should launch

When you install a new mod, it will show up unchecked on the bottom of the Mod List.

Choose its order (or leave it), then hit Save and Run. The launcher will remember your settings for next time so you need to just hit Run.

First, follow the official Steam Guide for fixing the game if it does not run correctly:

If you load a new mod and the game crashes, you can un-check it and launch the game to get it working again.

If your order ever messes up really bad, just click "Config Dir", delete the "LauncherData.xml", then replace it with the highest numbered one in the "BannerLordLauncher Backups" folder to restore your last load-out.

When moving things around in the list (which had ordering issues due to dependencies), the issues might still appear even after the order has been fixed. I believe this is a timing issue, but have not been able to pinpoint the exact cause. Moving the offending row up+down in the list should hide the validation icon.

All the sorting steps that you defined in configuration are applied in order.

The application check through all mods and their dependencies and moves any dependencies that are in the wrong spot, while trying to maintain the above order.

All assemblies referenced in the SubModule.xml file are checked for references to assemblies in other modules and applies the above for them.

Drag stuff between the two lists.

Click on the sword icons to switch between ascending and descending sorting.

The sorting algorithm will go through the list on the right and will stop at the first field that succeeds.

If a tie-breaker is needed, it will go to the next field in the list and so on.