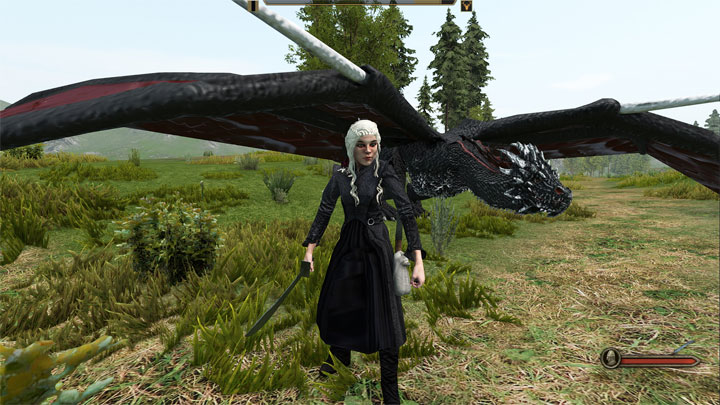 The Long Night - Game of Thrones Total Conversion - White Walkers is a mod for Mount & Blade II: Bannerlord, created by thelonewarrior. Be sure to check out the projects official Discord.

A game of thrones mod focussing on the White Walkers and magic and other fantasy elements by replacing all in game factions. NEW CAMPAIGN MAP! And new models.. Custom start as White Walker, magic now included to summon Wights in battle.

This is a total conversion that adds all the game of thrones factions, including The White Walkers and other fantasy creatures such as giants. The focus of this mod will be on the fantasy part.

It takes place sometime between when Ned Stark was executed and the North starting fighting with the Lannisters.

The White Walkers are not an easy foe. Wights are tough, very fast runners and hard to escape from, but killable with the right skills. Then there are the Famed White Walkers, almost invincible, normal weapons will barely hurt them, perhaps youll be lucky to find some of the mythical Dragonglass on your travels or even better.....Valyrian steel.

Do not expect a walk in the park, this enemy has purposely been made extremely difficult to defeat and the mod is still a work in progress.

I have also included the option to play as them with an alternate start although they are very OP.

Do not use vortex to install, it doesn't install correctly, Manually installing is the best way.

LOAD times will increase due to large new map.

Visual Glitches on map, they do not appear in the editor so I dont know yet how to fix them. Map is still a work in progress and is around 90% complete.

Adds new Wight units, as well as the factions from the show. Split into The North, The South, White Walkers, Baratheon, Dorne, Targaryen (dothraki and unsullied) The Vale and Free Houses.

Adds and changes all Sturgian heroes to white walkers and their leader is now the Night King, also buffs them and their weapons, you can defeat them without special weapons but its very hard, overwhelming them might be the only option or a powerful throwing weapon, Dragonglass and Valyrian Steel should kill them in one or two hits if hit in the head, it has special damage modifiers to do more damage than the stats show.

White Walkers are also armed with throwing spears and magic to summon more wights while in combat as well as close combat weapons, But apart from that they have very few if any ranged weapons, use this to your advantage.

Giants added, both living and undead. Undead are slightly tougher.

Giants are very slow, very hard to kill and do massive damage, they are also very expensive to recruit and feed but are worth the investment most of the time, just dont let them get surrounded as they can be overwhelmed, they are basically the tanks of designed to soak up damage but using tactics you can run circles around them and shoot them if you get the chance.

Troop trees changed and overhauled, The North have giants as their special rare unit and Southern Kingdoms have King's Guard for example. Plus MANY factions such as the Golden Company, the Stormcrows, The Brotherhood without Banners, the Night's Watch and many more, which can be hired in various places such as the Night's Watch can only be hired in the north near the White Walker lands.

You can now summon wights in battle, to summon them you first need to kill some enemies and can then use the thrown spell to summon wights at the target location based on how many enemies are dead, they also will be added to your party after the battle.

MAX: 10 per summon, WARNING: May Crash the game in large battles (although this spell has a safeguard to help prevent this by only allowing max of 30 wights to be spawned) there is a unit limit on the game that can NOT be bypassed, this will crash your game if you summon too many, it also does not always happen instantly, sometimes the game takes a while to realise but it will crash! The safegaurd can help with this, but just be aware of this.

Also only use ammo for magic that is in it's description or it wont work correctly.

Fire Magic - Various spells from a firey blast, a continuous fiery conflageration with short range to the bombs the children of the forest use.

Fire Sword - Press C to ignite the fire sword when equip, it will deal extra damage to wights

Fire wall - Throw it it place a wall of fire that lasts for a short time, all enemies passing through will be set on fire.

Magic can be bought in trade menu, it is also included in the White Walker Alternate Start, just remember your not the only one who can use magic........including the White Walkers and priests from the Lord of Light.

Dragons and rider are immune to fall damage, running and jumping will start a short flight or "glide leap". Other methods of flight are being worked on but this is the current method.

To use dragonfire, equip it and then rapid click, for some reason sometimes after the first shot it may require reloading.

Dragons can not be bought in the trade menu yet.

Also ?Dany Targaryen is he only character to have a dragon at this time.

Very powerful but brittle, it will break after a few hits and is automatically repaired after the battle, use it wisely, acts a throwing dagger or spear with very short range, youll need to get close to them and aim for the head, will kill most White Walkers in a single hit or two if you hit the armour first.

Even rarer, some dont believe it exists, very rare and powerful, it will help you defeat the White Walkers in combat.

Only White Walkers use these and the only way to obtain them is to use the alternate start detailed below in installation, very deadly and OP.

New skins and hair and eyes, become a White Walker in character creation and slaughter any men that cross your path, however it will be fairly easy as the Wights and White Walkers are pretty OP.

Custom start for playing as a White Walker, to use it, start a new game, Select "The White Walkers" then continue until you reach the screen where you choose your starting gear, then select skirmisher to see that you will now start with the White Walker weapons and armor.

Fight to the End (will stop Wights running away, to make battles more lore fitting)

Do not use vortex to install, it doesn't install correctly, Manually installing is the best way.

Mod works with version 1.5.4. I would recommend a new game when first starting this mod due to the large amount of changes it will probably cause you problems and crashes if you dont start a new game.

Make sure dll files are unlocked, there are various ways to find out online how to do this.

1. Verify your steam files before and after installation to avoid traces of other mods being left behind.

2, Then Move Both "Modules" and "Music" folders to your Bannerlord folder,

When asked to overwrite, select YES.

3. Install a launcher that allows for you to change the load order, if you dont, it will crash. This is the one i recommend.

4. Use only the following load order, nothing else will work:

Long Night -CORE must be above Native

Long Night- Custom Start must be above Native

EXAMPLE of load order BELOW: 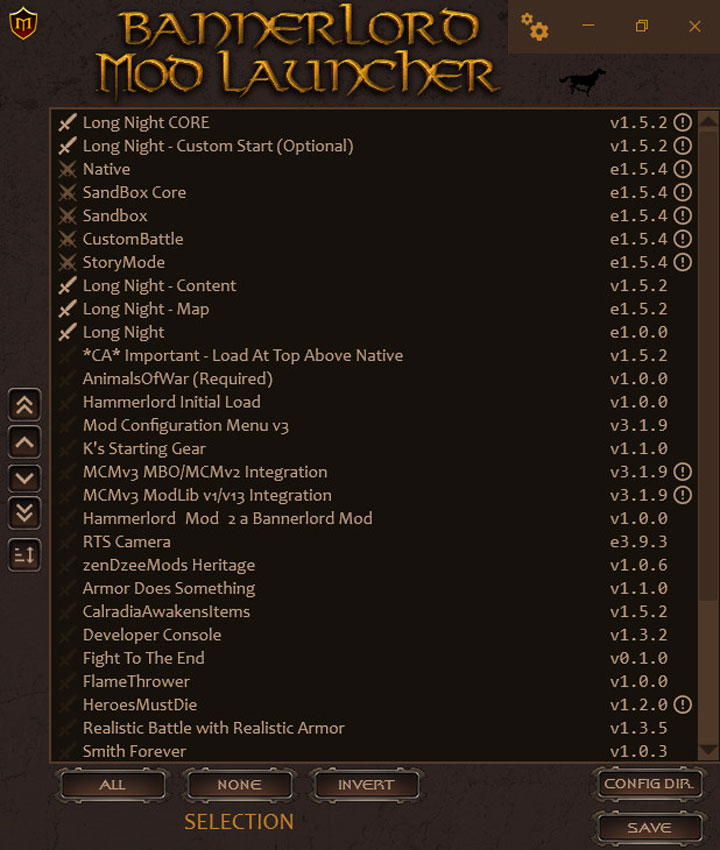