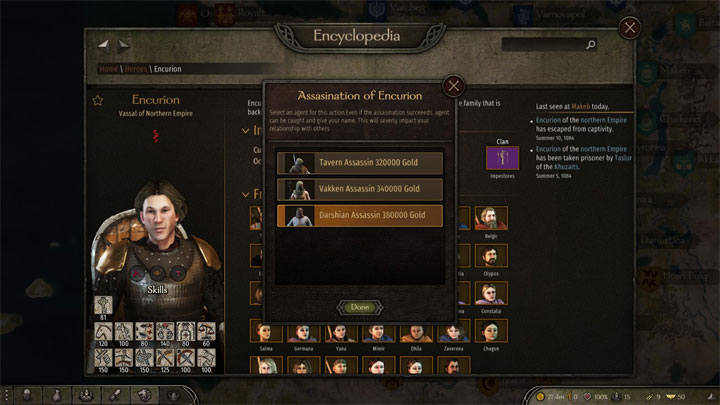 Intrigues is a mod for Mount & Blade II: Bannerlord, created by  Bloc.

As the name suggests, it's adding Intrigues to the game. These options are only there to spice things up a bit for current players. Enabling them to create their own dirty strategies. Actions include, assassination, kidnapping, torture, spreading rumors and starting civil unrest.

Warning: This mod is tested only on e1.5.7 - it's not compatible with earlier versions. It might work for beta branch - but I can't guarantee that.

"You are walking in the dirty-lower streets of Lageta in the night time. Your expensive cloak and chainmail boats are covered in mud and faeces. You never thought you would visit such a damned location, but your ambition for being the sole ruler of Empire makes you think that it worths. You approach a tall hooded man, his face is covered with cut marks. You are handing over the gold in a silk pouch - along with a small note. He is not saying a word, neither do you. Once you faded away to dark streets - he looks at the note and reads: Garios"

This is a Singleplayer mod for Mount&Blade II Bannerlord. As the name suggests, it's adding Intrigues to the game. These options are only there to spice things up a bit for current players. Enabling them to create their own dirty strategies - and creating a money sink for them. I will explain each of them one by one in detail.

Bannerlord isn't a complicated game. That much is known. In the current state of EA, you don't have many options in Diplomacy, let alone doing anything related to politics. Hence, this mod adds several options for you to do certain dishonourable acts to other lords in your way to the throne.

In Ancient and Medieval times political intrigues were the only thing to secure your own position in that world as a noble. Even if you are an honourable person, the next person in line might not be that noble, hence you were always in danger. I think it goes without saying but all these options in the mod are backed with historical references.

As long as you have enough money, plotting an intrigue isn't that hard in this mod. Just decide what to do, to whom, and find his/her encyclopedia page in-game. Then you will see options marked as below - I will explain all these actions one by one.

When you press any of them ( except maiming - I will come to that ) it pops up a window - making you select how much money you want to put and how much risk you want to take. These values are dynamic - and can change based on the events in the world. I will explain them in the action types. For each of them, your agent can fail but might not get caught along the way - or you might succeed but also got caught by the guards/people.

Actions do not happen immediately. Each of them has contract days. If you pay more to professionals, they tend to do things much cleaner and quicker. Once you pay for the contract, you have to wait that many days written in the day calculation. You will be notified when the action is finished ( good or bad ). If the character dies meanwhile - you will be refunded.

I think this doesn't require any explanation about what it does. However, the success rate for this is dependent on several factors. If the character is the leader of a faction, the price goes up, the success rate goes down, the caught rate goes up. Because faction leaders are well-protected targets. In each clan tier, your success rate goes down, and the price goes up - because even assassins wouldn't like to kill key players in the Calradia for a few gold coins. If your target is moving with a larger army - surrounded by the soldiers, the assassination rate gets affected based on how many soldiers he/she has in the army. This is applicable if he/she is staying in the Castle too.

One of the most obvious downsides of assassination is that, if you get caught, you will be condemned by the others in the Calradia. Negative effects are nearly the same as the execution if you attempted to kill someone adult. However, in this mod, you can also kill babies or under-age heirs for clans ( yes, you can kill newborns as well ) - however, if you get caught - this extremely dishonourable act will have severe consequences.

You still have the chance to fail even if you kill the target. If you succeed to kill the target and caught - punishment is the same. If you try to kill a faction leader and got caught - this is a Casus Belli - meaning that they will declare war on you.

Spread rumours cause the targeted agent to become dishonourable - it decreases relationship with its friends and other lords in the faction. It also causes renown loss.

If you get caught, the target won't be affected by spreading rumors but instead, you will be marked as a liar and will have relationship penalty with others.

Kidnapping character does exactly what it says. It kidnaps the character and puts he/she to your party as a prisoner. This can come in handy if you are planning to assault somewhere but don't want to deal with lord. Or you might want to sell that person - execute that person or maim that person ( will come to that)

You cannot kidnap faction leaders. They are well protected and kidnaping resistant. Kidnapping is quite pricey - the reason for this is that you need to transport character safely rather than killing him/her on spot. If you get caught, you will lose relationship points with people that know the target.

This action disturbs the daily life in a character's city. This doesn't mean that city will become a rebel faction immediately, but it will be very close to rebellion. If the city is in great shape ( high loyalty change, same culture, lord in the city etc ) then there is a really really high chance that it won't hurt people much. It basically gathers people, decrease loyalty by burning/sabotaging food stocks in the city. This causes temporary rebellion - if the city isn't in good shape, it's just a spark for bigger events.

Cannot be done for lords without any Town. You cannot select the town - and unfortunately, it's not saying which town it's targeting either. I might add this as info - but city selection might be too complex. If you get caught, you will see the backlash of this action from the town owner and others.

This is probably the darkest among all actions. This can be applied only if the character is your prisoner. This will decrease each skill of the character to half or to third based on some random value. This will also put your torture mark on the characters face. There is no success or fail rate. This action is free.

This action doesn't have any success rate - when you do that, this action cannot be undone and you will lose the relationship with almost everyone - even those who are not in the same faction but have honour perk will despise you. Your action will render a person almost useless and you will release him/her. However, your mark will stay throughout the game. You can maim a character only once. Another big downside is that, if your rivals hate you more than -50 and if they caught you as a prisoner - they will do the same to you as well. This basically forces you to be a good person - or if you wanna be a dick, don't get caught.

- If your maimed character already had a scar, the new scar will replace it

- There might be some issues with my spelling/grammar. Feel free to be grammar-nazi about that.

- Punishment-Cost-Reward balances might be off - I didn't play the game for long game-years before, so I'm not sure how the gold-balance is like now. If you request, I can later decrease amounts- ramp up the probabilities.

Extract into   bannerlord\Modules\ and activate in launcher.