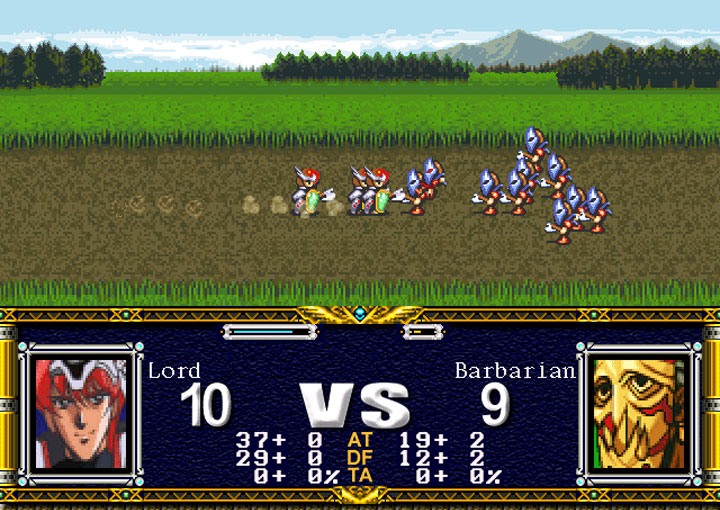 Langrisser I (1998) English Patch is a mod for Langrisser I: The Art of the Swords War, created by a team led by  Derrick Sobodash

The first game of the Langrisser cannon, Langrisser I, follows the crusade of Prince Ledin of Baldea against Emperor Digos of the Dalshis Empire.

After the fall of Baldea castle and loss of Langrisser, Ledin, Volkoff and Narm set off to recover the castle. But Jessica and Taylor had terrible news for the young princeLangrissers power had been used to seal off an ancient evil that the Baldea line had battled since the days of Elthlead. Digoss possession of the sword was causing that evil to awaken once again.

The game was originally released in the United States as Warsong by the now defunct Treco. This PC remake features all new graphics, an upgrade to the Der Langrisser game play engine and CD audio.

This translation is 100 percent complete and was initially distributed as an ISO. If you cannot find a torrent file of it, you should be able to unearth it on eMule or DirectConnect. The patch provided below is simply the raw files an adventurous soul would need to build their own English disc using the Korean disc as a base. Of course it will be missing all the new audio and video enhancements, but oh well. A patch in the common sense was impossible because 80 to 90 percent of the disc was changed.

Aside from improvements to the soundtrack, Moon Knight and myself made countless other tweaks to the game including special care to Taylors speech (Arrr, he be a pirate, ya know?) and restoration of night-time backgrounds to Scenarios 3 and 14something that was in Langrisser I&II but got yanked in the remake.

The editing process went fairly quick, thanks to a once-over by EricKei and a lot of hard work between Moon Knight and myself. I think the end result should please newcomers and die-hard Langrisser fans alike.