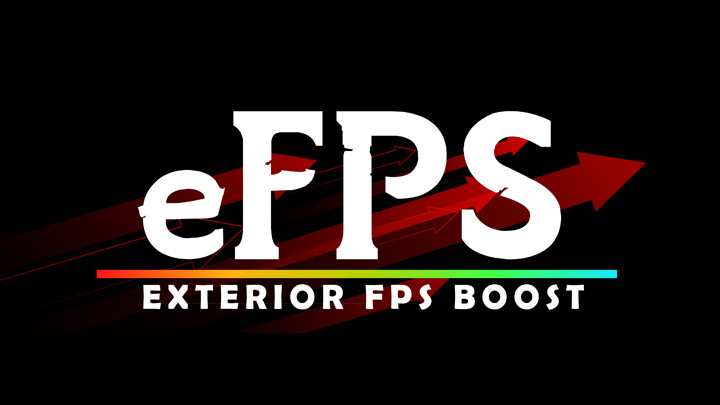 eFPS - Exterior FPS boost is a mod for The Elder Scrolls V: Skyrim Special Edition, created by nicola89b and Firegtx.

eFPS - Exterior FPS boost makes extensive use of a native engine feature called Occlusion Culling. Occlusion Panes have been strategically hand-placed to enhance performance without affecting visibility and immersion. These panes are placed inside walls, houses, mountains and any big object in general, drastically reducing the draw calls. In our testing we've detected improvements of up to 5-20 FPS in certain critical areas. Occlusion Culling is hardly ever implemented in Skyrim by both Devs and Mod Authors because it is both a delicate and tedious process. eFPS - Exterior FPS boost is the first mod of its kind!

Anyway we put thousands occlusion panes and boxes in big part of the map one by one. These panes are placed inside walls, houses, big objects, mountains and so on, it reduces the draw calls drastically (that means a 5 to 20 FPS gain in certain critical areas).

Certainly the increase in performance is inversely proportional to the power of your computer. If you have a very very very powerful PC, you may only see a small improvement in FPS. On the other hand, the idea of this mod is to improve performance especially for those who do not have an ultra-powerful PC.

Let's move on to the (slightly) bad news!

Long story short, we recommend to start a new game when installing this mod. We still haven't completely figured out how eFPS behaves with existing saves. One of our tester reported FPS drops on their very old heavily-modded savefile while getting the expected FPS boost on new games. Other testers with more recent savefiles reported no issues with eFPS, and could benefit from the FPS boost without having to start from scratch. Still, we feel it's safer to start a new game and that's our official recommendation.

As of now, mods that move or delete existing architecture are incompatible with eFPS. We are currently working on patches for the most popular mods, but it's a time-consuming process. Our focus is beta-testing eFPS, so we'd REALLY appreciate if you could avoid posting patch requests on this page, as we plan on creating a specific Patch Hub later on. In the meantime, you can join our Discord to get early access to alpha version patches! Open Cities would need extensive patching, so it's currently incompatible.

Patches at our server --> DISCORD

Extract to  Data and activate in Launcher. Alternativelly use Mod Manager.

This NEED TO BE ESM or when we will make patches you'll have problems, and this mod is intendend for new game as written on compatibility section. Don't ask us a version without ESM flag because it would have no sense et all. Let loot order this.