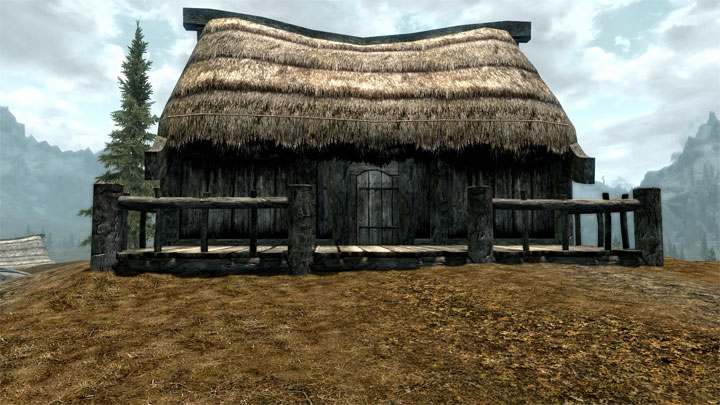 RTS for Skyrim - SSE Port is a mod for The Elder Scrolls V: Skyrim Special Edition, created by Mattski123. It’s based on older Skyrim project by ripvanwinkle111.

You can dynamically place houses, stores and objects, recruit villagers and merchants.

Everything you place is paid for with gold or firewood.

When the mod starts, you will be given 3 food objects.

For your convenience, you should favorite and hotkey these items.

To access the settings and tutorial, press either RTS Scroll objects four times.

There is a TUTORIAL for placing objects and another for a House.

There are three classes of Merchant; blacksmith, General store and Apothecary.

Villagers who live in a store will automatically work as that class.

There are five merchant inventories for each class.

The merchant will randomly be assigned one of those inventories.

So you could have 5 merchants with different inventories, or 10 merchants assigned to the same inventory.

Villagers can become followers. (They are leveled NPC's, min 10, max 60)

Villagers will forage and harvest plants in the area.

Four Militia Squads. You can have all your villagers following you at the same time.

You can tell your squad members to be essential or killable.

You can tell them to move out of your way.

You can tell them to harvest plants while following you. Butterflies and fish collection can be toggled.

To assign a uniform, tell them you have a new uniform, it automatically forgets the old uniform.

Then give them the new armor, then tell them you are done.

A uniform can have upto one bow, one shield and one melee weapon plus other armor and jewelry.

If they already have the item, you need to take it and give it back to them.

If you don't assign a uniform, they will wear the item(s) you give them.

helmet, they will wear the helmet till the next time you change cells.

different shield, the script will make them switch to the assigned

If they equip a spell, staff or torch, the script will not force them to change items.

You can have an unlimited number of houses, shelters and workshops.

....You can change the outside appearance of the house after you place it.

....This will not change the internal cell or the look of the door.

....Sneak and activate the door to get the menu.

....Two house styles that you can upgrade to workshops.

Merchants pay a share of their profits to you. 100 gold per day.

Hire Lumberjacks to work at your Lumbermill.

--Each Lumberjack will make 800 firewood a day. As long as they are not on morning or evening patrol route.

....Equip the spell, it will start highlighting objects you can blueprint.

....Cast the spell on the highlighted object you want to blueprint.

There is also a cheat menu to add gold, smithing supplies and alchemy supplies.

Put the mod into „Data” and activate in game’s folder. Or install it through Vortex.