I don't like games that complete themselves. Take Telltale games, for example. I only managed to finish the first season of Walking Dead, and my adventure with Life is Strange ended on the first episode. Now, these are fine stories, of course, and I really like a well-crafted story, but I expect more from games. For story itself, I prefer to read a book or watch a movie, instead of mindlessly pressing keys to see just another portion of dialogue. I was all the more surprised by how much fun I had during the first few hours of Cyberpunk 2077. The couple of hours that consisted mainly of clicking through successive portions of dialogues. 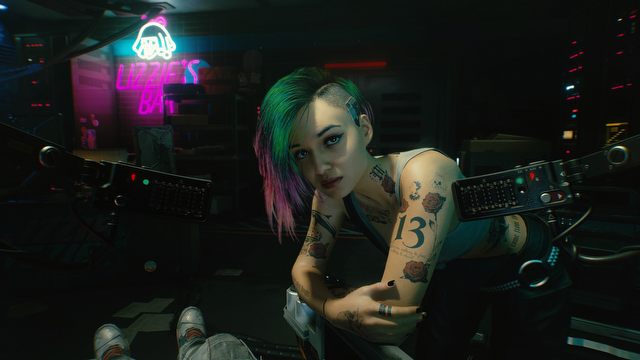 All this is due to great story, excellent direction and some exquisite voice acting. Listening to the dialogues in the game, I never once had the feeling that I would like to rewind them and go back to the open world. I felt like I was watching a great movie or TV show. One which not only has an excellent pace, but also portrays the main character, i.e. the world of the game in a sensational way. Before Cyberpunk 2077, I'd never read Mike Pondsmith's RPG manual, nor the compendium published by CD Projekt, nor even our piece, but it took me a few hours with the game to know what Kiroshi, Arasaka or Braindance are and remember these names as well. I learned all this through the story itself, not from reading notes hidden around the world. I don't remember a game that would introduce a player into such a complicated world so seamlessly.

I didn't mind the fact that most of the dialogue choices in the game are just an excuse to make the player feel they're in charge. Sure, we make a few important choices in the game, decide whether to kill someone or not, but for most of the game I didn't feel that V was "my" heroine. I can select gender, and hair color, but it will always be the V written for us by Mike and other writers. In this respect, it doesn't differ much from Geralt from Witcher 3. I dare say that some 70-80% of the dialogue choices could be automatically selected without much impact on the story and our character. However, as I mentioned before, it didn't stop me from enjoying the game, because V is a very well-written hero.

Playing Cyberpunk for the first time, I sliced off the monitor only after a few hours of fun, during a mission with more enemies. A little more shooting was enough for the spell of the film experience to break. 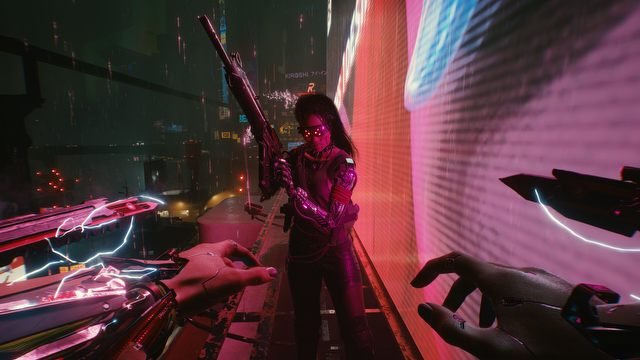 The problem with Cyberpunk's gameplay is that everything linked to it is average at best, and in some cases very weak. Hacking is sort of getting there; shooting gives little satisfaction; enemy AI doesn't exist, and user interface begs vengeance. While I found The Witcher 3 boring after about fifteen hours, in Cyberpunk, I started to get bored much sooner. And of course I guess that there will be people who enjoy the hacking, don't mind bullet-sponge opponents, and don't grind their teeth every time they see the interface, but it is impossible to hide the fact that these elements are lagging far from the level of quality of the story and direction. It looks like two completely different studios were making the game. One world-class, and the other made of beginners. None of the games from CDPR ever really shone in terms of gameplay, but the new genre proved even more problematic for the studio. On top of that, we of course have the repulsive amount of glitches and bugs.

All this leads me to one simple conclusion. I would love to experience Cyberpunk 2077 as an interactive film or a completely linear action-adventure game. A game in which I have to go somewhere from time to time, make important decisions, and maybe even shoot from the car, but one that would come without all that useless junk of inventory management system outdated about a decade, chaotic combat, and possibly the worst journal I've ever seen.

The city is great, but the open-world as such is at least a league below the accomplishments of Rockstar Games, the gameplay is bland and uninspired, even though the story is definitely top-notch. If they really focused on their advantages and admitted their shortcomings, perhaps their games wouldn't be created in the pain of crunch, they wouldn't have a ton of mistakes, and the dialogues would become more RPG-like? I'd like to see that one day, but 8 million pre-orders are probably a more convincing argument.