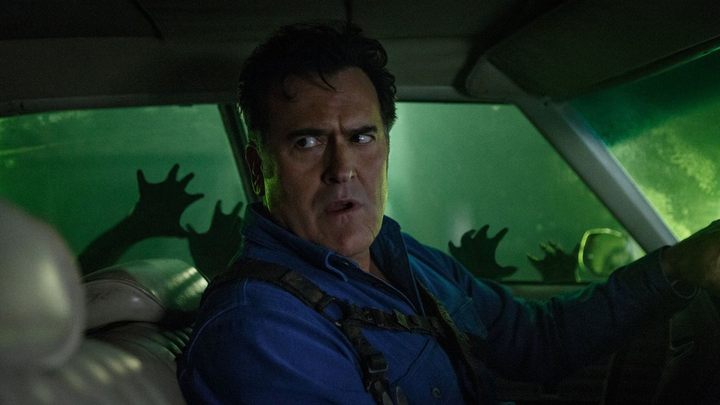 Before Sam Raimi has made Spider-Man a giant of a franchise, and then ruined his image with emo-dance, he specialized in horror films. That's where he started. From a budget, over-the-top and macabre films that were funny at the same time. Just like the Evil Dead series. The first part released in 1981 was smashed by critics and looks like a cheap amateur project, but it provided a bit of intentional fun. The overwhelming atmosphere and insane performance by Bruce Campbell were inscribed in the minds of the class B-cinema fans.

...And that's where they'd probably have ended, if it weren't for the fact that modern series creators can afford a lot more stuff nowadays. In 2015, Sam Raimi returned to his favorite genre. And brought new toys.

The prayers of fans were heard and instead of unnecessary reboot we received a developing original continuation, referring to the great message and philosophical questions left by the franchise nearly thirty years a... Hold it! I was joking. Ash vs Evil Dead series is exactly what it should be. A total celebration of class B horror movies! Pure slice and dice, rock'n'roll demolition, series blood-full of violence and gore. Gibs thrown in the air (please remain calm).

Monsters? Lots! Classic support characters? Make it a double! Lucy Lawless, who we didn't expect to see? Sure thing! And she's doing an excellent job. Unique atmosphere of a major overkill? In quantities exceeding acceptable standards. Finally, there is even Campbell himself. As Ash he demonstrates a disrespectful attitude and wild, crazy energy of a guy who prefers a chain saw and double-barreled shotgun as his best friends.

What else you can find here? Some careless manipulation with a dark book of magic and a bunch of monsters, which should be included in the list of endangered species after their meeting with Ash. It all looks like mashed potatoes, and Raimi with his co-workers have definitely known what they're cooking. But no one said that horror always has to be taken seriously. The only thing you can regret is that this crazy rollercoaster has ended after just three seasons.