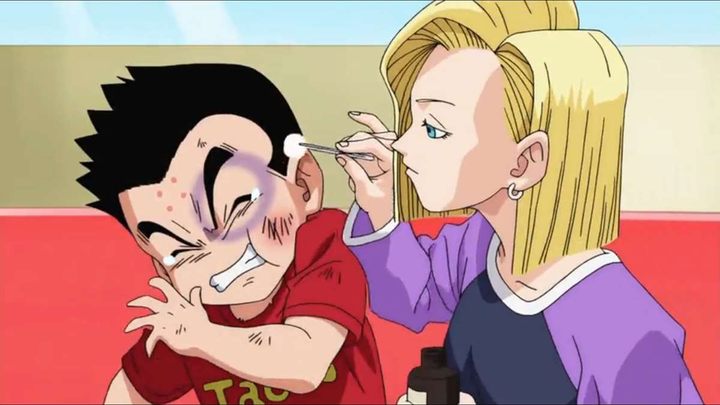 It was not an easy love. Like her twin brother, C-18 was introduced to the audience as an antagonist. Incredibly strong, ruthless and - as it seemed then - devoid of feelings. Kuririn liked the Android from the very beginning. She, however, was not very fond of a noseless Earthman. Kuririn, however, won the heart of Eighteen when he asked Shenron to remove explosives from her and C-17's bodies. Though it took a while for the two to meet under normal circumstances, in the end the love was stronger than anything between a tall, fair-haired android and a stocky, usually bald, Earthman.

Their daughter, Marron, resembled her father as a child, but as she grew up, she became more and more like her mother. Interestingly enough, she owes her name to ... Kuririn's ex (don't ask why Eighteen agreed, I have no idea). The girl does not seem to be interested in martial arts, unlike her parents. Kuririn and C-18 are still training. And although later the android was far short of the power level of Goku or Vegeta (just like Kuririn, who was even weaker than her), they were both invited to participate in the Dragon Ball Super Power Tournament. And they did really well there.