In a short gameplay demo presented during Gamescom 2019, we got to know Sam's new skill, that is... urination. It can potentially be advantageous, since urinating in a single spot for a longer time will spur the growth of fungi. At the moment, however, it is not known whether this will contribute to growth of plants, whether any additional conditions have to be met to achieve that, or whether those fungi will have any use.

The fetus, which Sam takes everywhere, will likely have a large influence on the gameplay. The players will have to take good care of its mood, and calm it down after taking damage.

Stress affects the BB fetus that Sam carries everywhere. Too much of it causes anxiety and makes the baby cry, which can be soothed by playing harmonica, lulling, or singing. If the baby likes it, we will be rewarded with like points.

Kojima seems to emphasize small details in the game, which facilitate immersion. In addition to urination, massaging arms after prolonged carrying of cargo, taking short naps and bathing, we can modify the appearance of the protagonist by wearing glasses and hats, and make sure he takes his shoes off every now and then to give the feet a rest.

There's more to life than work, and so the creators have also prepared a hideout for Sam. After completing a job, he can go there to get some solid sleep, have a hot shower, take pictures, or listen to music. We can also play with the BB there, to comfort our little companion. It is also a place where we can change the appearance, and sort out our inventory.

According to official announcements, we will be able to force our way through the game, but there will be many other ways. The videos presented by the developers show excerpts of gameplay focused largely on sneaking around and avoiding confrontation with dangerous opponents. When it comes to combat, we will have at our disposal an arsenal of fire arms, melee weapons (such as electrical batons), or any item we're currently carrying (for example, a suitcase), and in extreme cases, we can always resort to a regular brawl. The range of enemies will encompass soldiers, as well as all kinds of creatures  from small mobs, to huge, squid-like monsters. 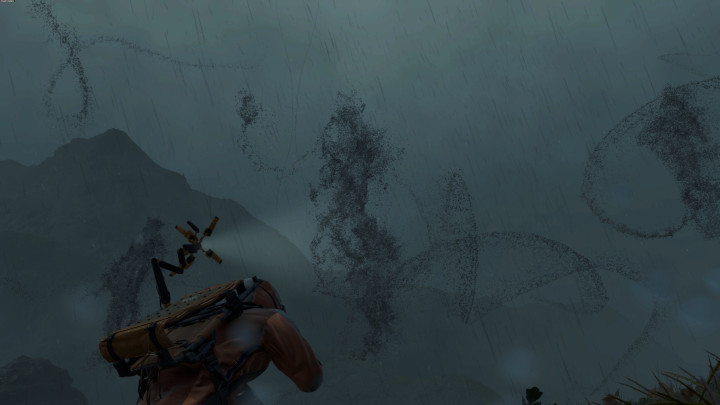 Avoiding combat in Death Stranding can be the better idea.

The action in Death Stranding is shown from third-person perspective. Exploration and hiking will be crucial in the game, as you might expect in a game about a courier. The inventory will come in handy during exploration  we'll be able to use a grapple hook, or a tall ladder. In Death Stranding, we will also be able to drive various vehicles (for example, motorcycles). The game will take place in an open world, providing greater freedom in the way you want to play it. A special scanner that Sam is equipped with, showing interesting targets and markers, will certainly be useful. 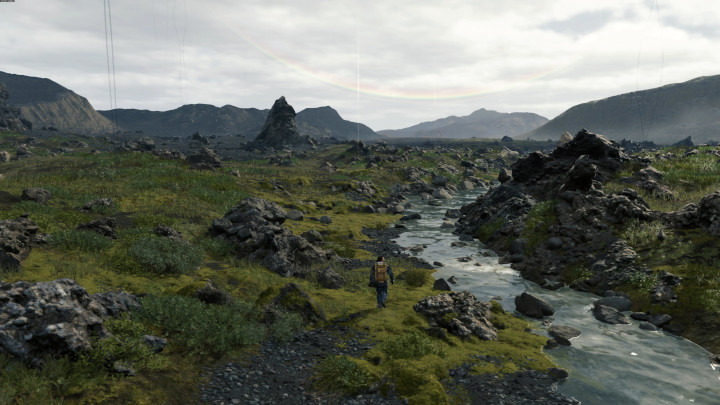 Judging by the presentations we've seen, it seems that exploration will be the cornerstone of fun here.

At Tokyo Game Show 2019, Hideo presented over 45 minutes of gameplay from various stages of the game, where we can see what's working for Bridges like. Before attempting to realize an order, we will have to prepare thoroughly. Planning the route is a necessity  the map shows the topography of the area, and we have to take appropriate tools with us (such as ladders and ropes). Another important element of preparations is the fact that Sam can carry no more than 120 kg of  well  stuff with him, and the items have to be placed in the right slots on the body. It will also be necessary to maintain good weight balance, since putting too much on one side will render the journey perilous. Sam's secret weapon is a mobile platform that not only can carry additional  well  stuff, but also Sam himself, like a sort of a hoverboard.

In Death Stranding, we traverse different areas, each of which represents a different challenge. For example, crossing a river is a dangerous business and requires lots of dexterity; for safety, it's best to scan the river first, which will reveal to us which way is easier. Then, we will have to move slowly forward, maneuvering Sam so he doesn't fall. We should also watch his life indicators, and give the poor guy something to eat every now and then, so that he doesn't just topple into the river, risking losing cargo and increasing stress.

There are some outposts scattered across the map, in which we can get some additional supplies, repair gear, or recharge the exosuit.

In the world of Death Stranding, we can use different types of vehicles such as motorcycles, scooters or trucks, varying in speed and the amount of storage space.

Dying will not prompt a game-over screen. If we die fighting an enemy, it will lead to a great explosion, after which the hero will be reborn. Such explosions should leave a permanent mark on the game world.

At this point, players move into a kind of alternate reality. This underwater realm will be a kind of intermediary state, from which we can decide to continue the adventure. Getting back to the world of living will however be more of a reincarnation than resurrection.

According to Kojima, Death Stranding will be an open-world game, where players will be able to cooperate. There has been speculation, and some leaks confirm them, about the impact of the players on the entire world of the game, along with some other innovations. Most of them have not been confirmed yet  we only know that multiplayer will actually be present in the game.