I finished Assassin's Creed: Origins almost a month ago. I was expecting a lot from this installment of the series; I've always enjoyed it, but the formula had definitely been exhausted. Sadly, I was in for a disappointment. It was a nice game, with well-thought-out quests and reliable delivery of open-world action. Even so, the 30 hours it took me to get to the end of the game turned out to be a terribly boring road of toment.

After that experience, I was worried that attempting the apparently similar Horizon: Forbidden West just a few weeks later would tarnish my experience of this game. I was wrong. The more than 40 hours I have spent with Aloy have gone by faster than the unplanned encounter with the enraged Thunder Mouth Alfa. In addition, I plan to spend at least twice as much time on further journeys around the "forbidden west." 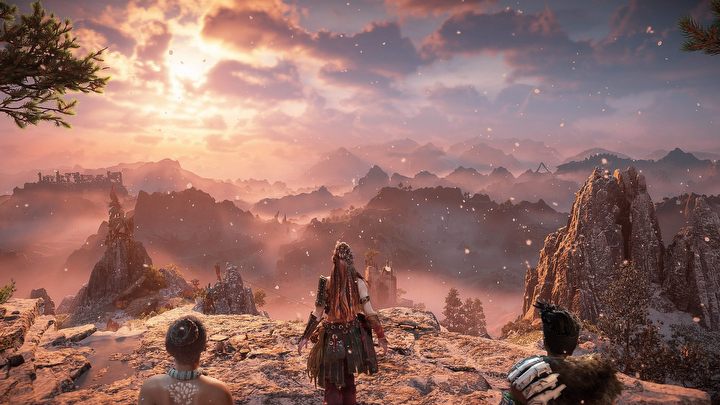 It's hard to get enough of this world!

Such a discrepancy in the perception of two, similar games made me wonder. Why is it that I feel compelled to sweep all question marks off the map of one game, but in another title, I feel like it's a sad duty and not much more. Why did the sci-fi game engrossed me completely, while the one set in ancient Egypt was rather disagreeable? Why did I found the Japan potrayed in Ghost of Tsushima utterly charming, while at the same time, despite two approaches, I couldn't really get into The Legend of Zelda: Breath of the Wild, even though the game is universally acclaimed?

I ponder over this for quite a while. And I finally figured out what makes special open worlds for me. Everything that defines open worlds – beautiful maps, more or less engaging storyline, side activities – is actually of secondary importance. For the open world to actually work, it needs a good combat system. Or at least one that doesn't interfere with the fun.

The real power of Horizon: Forbidden West's combat system is the simplicity of the basic assumptions. Since most of the time we deal with mechanical beasts, often of gigantic sizes, the creators didn't experiment with any sophisticated methods of melee combat or defense. We have two types of spear attacks, dodging, and ranged weapons. And that's about it. These three, simple elements were then enriched with more intricate systems – combos, special abilities, resonator blasts, traps, differences in ranged weapons (which additionally also require using the right ammunition). 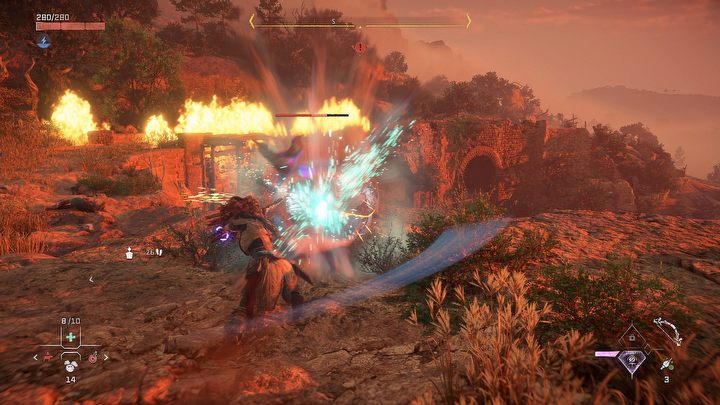 The basics of the combat system are easy to learn and intuitive to use.

Thanks to such a structure, the mechanics which are most conductive to survival are the easiest to use, and we quickly start using them instinctively. The excess of functions and buttons isn't overwhelming in the most dangerous moments, and we can easily learn more complicated moves in less risky situations. Paradoxically, this system also benefits from being conservative with Zero Dawn – small improvements mean that anyone familiar with the last game can easily dive into the sequel without having to master anything particularly new.

However, the best thing about this system are, of course, the opponents. The human ones, despite the pre-release promises, remain miserable and neither pose a serious threat, nor fighting them is any fun. The robotic dinosaurs are what this whole game is about. Small, big, fast, slow, lethal in close quarters, lethal at a distance. Each with unique attack types and weaknesses, all extremely durable and able to kill us if we lose focus for a while. Even in the final stages of the game, we have to be careful when dealing with basic monsters, because a few stupid mistakes can quickly reduce our health bar to critical values. 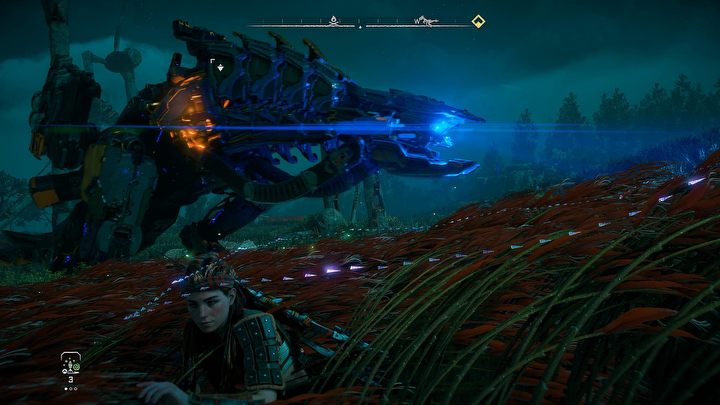 You won't find such opponents in any other game.

The enemies in Horizon: Forbidden West allow for a lot of freedom in the choice of combat approach. I preferred defeating enemies using traps – and I could eliminate practically all regular beasts this way, only having to use different tactics against bosses. If I would like to play with a ranged weapon or a spear – these are also completely viable combat methods. In each of these cases, the duels are exciting – thanks to the variety of machines and polished controls, they are also very engaging.

As a result, everything else directly related to combat is engaging as well – exploring the world, carrying out missions, setting up camps. Even collecting materials for upgrades could was an adventure, because most often it consisted of finding a specific beast and defeating it – often tearing off a specific part of the body, which additionally made the duel more difficult.

In Egypt, everyone is fighting the same

In Assassin's Creed: Origins , I had the opposite situation – because I did not enjoy the combat, I was also very quickly tired of other activities of the game, inevitably related to combat in some way. After all, no matter if I was just exploring the world, chasing collectibles, or doing side quests, all that usually ended in a fight – whether in the hundredth enemy outpost, whose density in the game is greatly exaggerated, or during a meeting with one of the numerous patrols cruising both cities and wastelands. 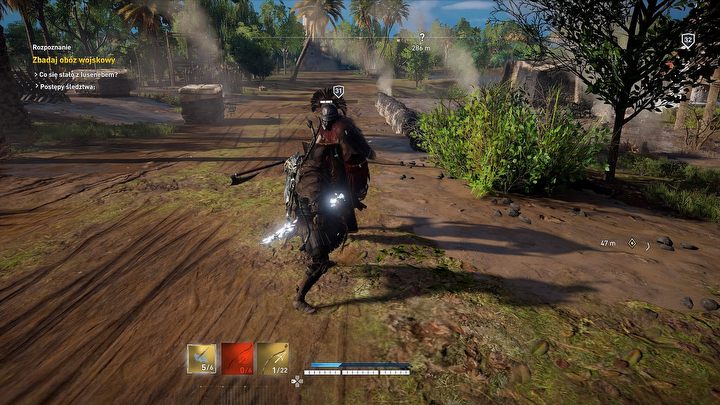 Breaking the guard, then delivering a series of rapid attacks. It's always like this, possibly ever since 2007.

The biggest problem I have with this combat system was that it is formulaic and banal. I found out very quickly that a guard break attack followed by a series of swift strikes is a flawless method that allows dealing with any threat. The use of other techniques was an unnecessary gimmick, because none of them guaranteed 100% success, contrary to this method. The same was true of stealth, which made little sense as there were no negative consequences for me to be discovered of revealing myself – it was actually time-saving, as it made enemies rush to die by my sword. The fights were easy, and so it quickly got boring, too. And this meant that everything else became uninteresting – running around the world (because you still have to fight patrols on the way), destroying outposts (because it was all about fighting anyway), carrying out missions (because these were mostly about doing something in outposts or fighting enemies somewhere in the field).

Only at the very end of the game, the creators decided to teach my opponents how to deal with my tactics and thus made me think during the skirmishes instead of using a single solution. Much too late – at this stage, the only thing I wanted was finishing the main plot and forgetting about this unpleasant adventure. This is one of the most unpleasant open worlds I have dealt with – and I have no doubt that this is primarily the fault of the uninspired combat system. 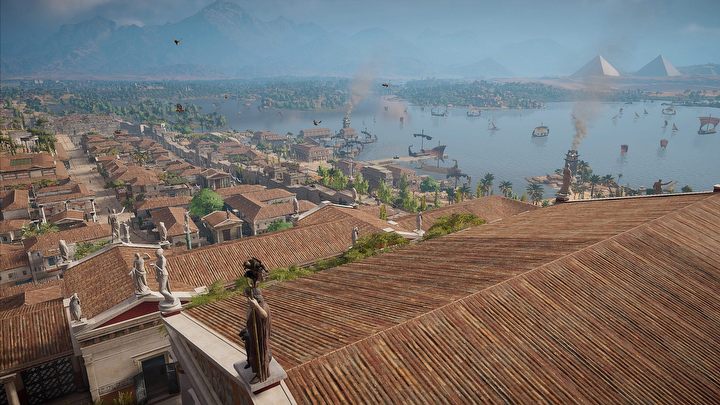 So what if this world is beautiful, if traveling around it gets boring so quickly.

Live is a fight

These are the most recent examples, but there's more. We have Ghost of Tsushima with probably the best combat system in modern open-world games – I was happy to get rid of every single enemy in that game. On the other side of the spectrum, there's Breath of the Wild for me. Where my editorial colleagues see a great game, I saw a mostly empty world, where combat was very annoying, weapons broke down every so often, and the gameplay loop is about running from one environmental puzzle to the next. It only took one annoying element to completely disgust me with that aspect – and, in effect, the entire game. At least for now, because I'm still considering going back, three times is a charm, giving this goddamn Zelda a chance again to kidnap me like it did so many others.

A specific case, without accounting for which this small analysis would not be complete, is Death Stranding. The combat in this game turns out to be... Well... Goofy – that's probably the best way of describing it. The opponents seem extremely clumsy and can be fooled in much more idiotic ways than, for example, in typical stealth games. Hand-to-hand combat reminds me of people running in fast-forward on Benny Hill. And yet... There is something special about the system developed by Kojima's team. And that's most likely twof actors: great freedom and the fact that the system simply gets out of your way – the Japanese, as he does, designed for his work gigantic amounts of weapons, gadgets and systems, half of which we don't even have to use. But they're there, acting in very original ways and encouraging experimentation, often with unexpected results. Have you ever tried killing enemies instead of stunning them? Most players probably don't – but there are separate mechanics associated with killing enemies; indeed, there are buildings in the game designed specifically for it.

And it's probably this freedom that makes the clashes here, despite their drawbacks, entertaining in a way. This and the fact that their dosage is much more reasonable than in the series of French action games – because combat doesn't even have to be outstanding, it's enough that it doesn't interfere with fun. Then the remaining components of the open world easily take precedence over combat. 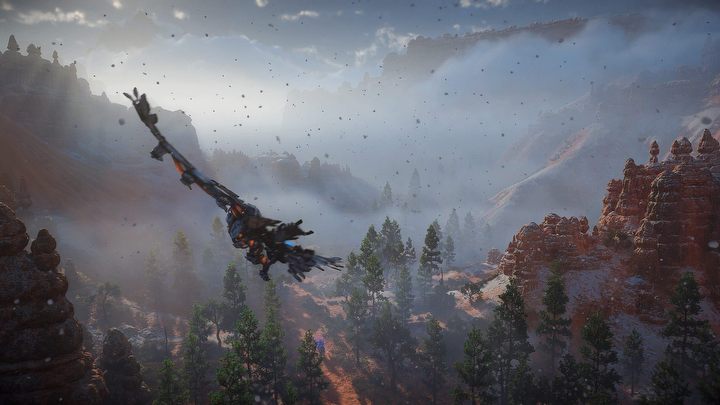 Horizon: Forbidden West is the sum of many elements – and combat is the key of them.

The key to success

Various things can motivate us to keep playing a game. For some, the most important thing will be the satisfaction from difficult victories, for others, the opportunity to spend time together with friends or to relax after a hard day at work. I think that digital entertainment is mostly about emotional stories for me, so for the most part, I care about the story first. At the same time, I remember that modern games require huge amounts of work, employing hundreds of individual components that have to work together. In order for this plot to really resonate with emotions, these elements must all be done well.

In the case of open worlds, these components are particularly numerous and they have different importance. Forbidden West could do without liberating camps or without dialogues, and would most likely still be a great game with an engaging story. But if combat was unrefined, all the remaining elements would also stop working properly or make a good impression. That's why I'm glad that this aspect works so well here. Because thanks to this, I can enjoy what interests me the most without any obstacles. By the way, I made sure that I am not fed up with open world games. I'm just fed up with poor combat systems.