Horizon Zero Dawn introduced us to Aloy, a smart and brave heroine who went on a journey to find out who she was and discovered that only she could stop the world from ending. It also introduced a new IP that showcased addictive combat, an enormous post-apocalyptic world filled with dozens of hours of exploration, and an intriguing story that developed and matured alongside Aloy. 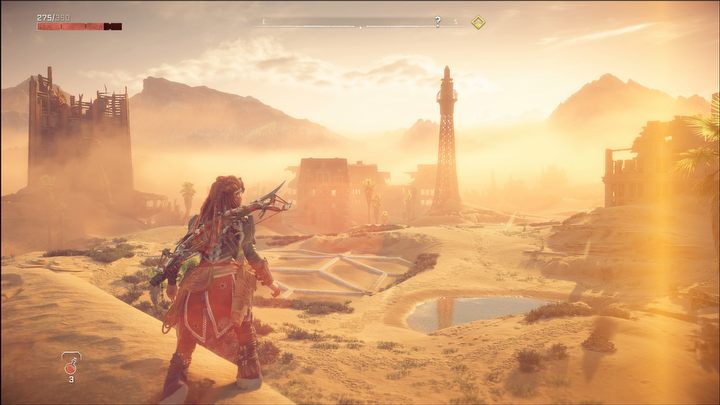 Fast forward a few years later and Horizon Forbidden West is just as alluring as the original and is teeming with even more to discover. It no longer has to go through that awkward phase of introducing itself to us, but instead utilizes what it made it so strong in the first place and builds on that base with more fluid combat, a skill tree that lets you customize it how you play, and quests that bring you closer to its detailed world. Suffice it to say, this is a must-play for any PlayStation 5 owner.

Time To Save the World Again 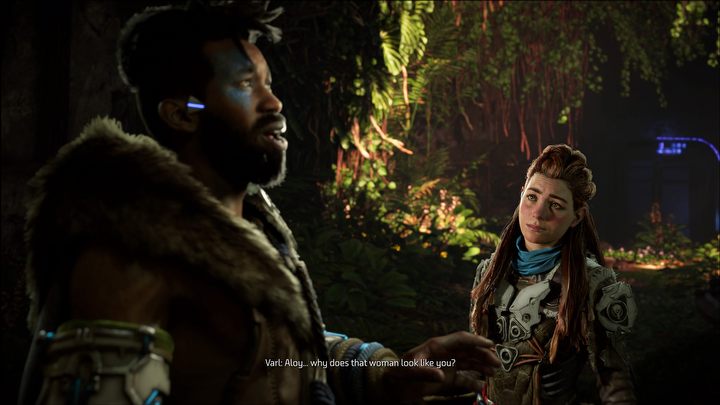 What makes Forbidden West such a strong sequel is its narrative picking up six months after the events of Zero Dawn. With Hades seemingly eliminated, the planet is now dying, and it is once again up to Aloy to find a cure. The only one who can truly save the planet from extinction, she now sets out to find a way to restore humanity’s original plan for salvation, Gaia, to full power with the hopes of restoring her world back to normal.

Each main mission keeps the story going and lets you explore an area of the world only alluded to in Zero Dawn. This “Forbidden West” spans from the edge of what is now Utah and stretches to the coast of San Francisco. Aloy’s journey lets you explore the ruins of ancient cities and meet with new tribes who have made their home on Old World structures like the Crescent Dunes Solar Panel Energy Project or a dilapidated Chinese casino in the ruins of Las Vegas. Because the game takes place in the future following a reset of humanity, exploring this future, yet very primitive world fills you with a sense of both familiarity and curiosity.

This sequel further expands on topics and lore introduced in the original and answers many questions we were left with when Zero Dawn ended. In doing so, the narrative also introduces new villains that provide a surprising twist in the story and further complicate things for Aloy and her pals. The events that follow each main quest keep you on the edge of your seat, but the only disappointment is reaching the game’s final moments and realizing there is no bow at the end. While Zero Dawn planted hints at a sequel, Forbidden West practically throws it in your face. 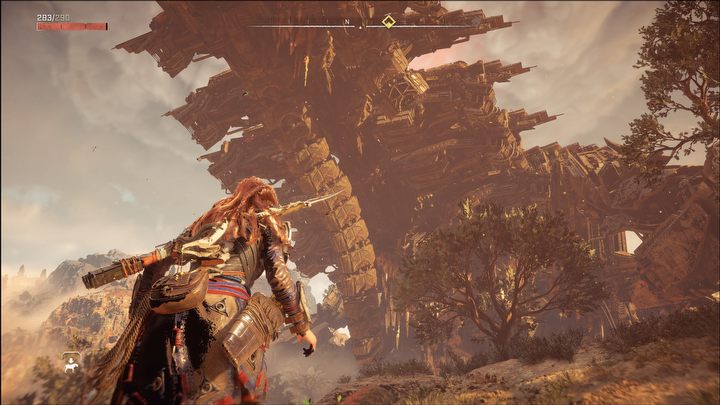 Exploring these new areas feel more intuitive with the introduction of new tools like the Shieldwing, which lets Aloy safely glide after jumping off any altitude. It makes traveling so much easier and gives you breathtaking views of your surroundings. Even climbing mountains feels better as you can now use your Focus to scan cliffs to show areas where you can grab onto. Your new rappel tool also lets you quickly propel yourself onto some surfaces further speeding up the time it would normally take to climb. You also get a cool new mount near the end of the game that completely takes exploration to new heights. 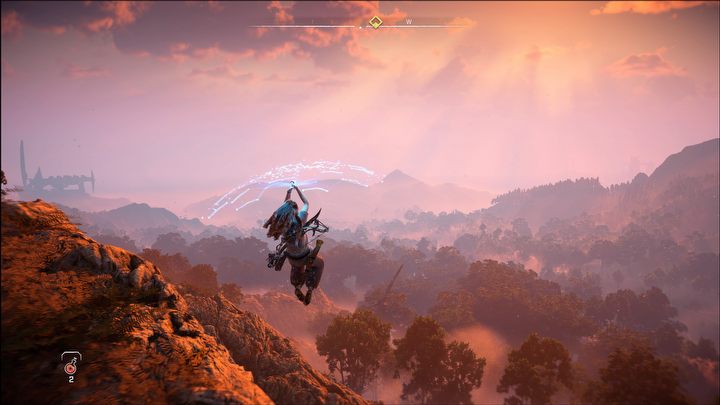 While these improvements make running around the Forbidden West so much better, swimming, however isn’t the most intuitive. The original didn’t let you swim deep underwater so it’s great that this sequel gives you entire underwater ruins and even ancient cities to explore. The issue, though, is that the camera doesn’t always work well in conjunction to the direction where you are swimming leading you to sometimes to get stuck when changing directions. Swimming controls overall just feel wonky, and some underwater ruins can become confusing mazes because of these issues.

Many of the main quests and side missions I will get to later feature both exploratory and combat sections that usually involve Aloy making her way through a new location, finding what she needs, and having to defeat an enemy standing in her way. It follows a familiar pattern from Zero Dawn, but the difference here is that some of her quests will also feature other characters who soon become part of her team to save the world. While Aloy was seemingly alone in her first game, here, she has friends, both old and new, who sometimes join her to complete main missions and fight by her side.

A Rich World to Discover

In fact, these characters are a joy to get to know as they all come with their own personalities and struggles. Familiar characters like Erend and Varl join Aloy, but she is also joined by new faces like the wise Utaru farmer Zo whose tribe equates the reboot sounds of a machine to a religious hymn and Kotallo, a Tenakth whose tribe’s traditions originated from a war museum’s hologram displays. These characters further provide a glimpse into the world of Forbidden West and the many lives and cultures that inhabit it. 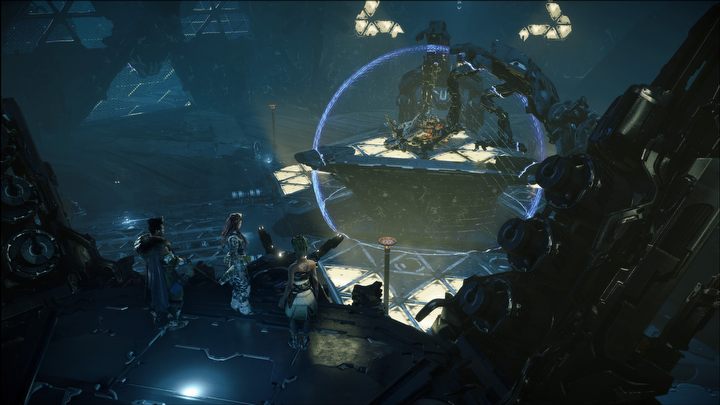 In addition to main quests, the game also has multiple side quests that can be completed for experience and to unlock various gear. While these “micro-stories” can sometimes seem unimportant compared to the heaviness of Aloy’s main mission, they paint a picture of the primitive world she is trying to save. A majority of them are more than simple fetch-quests, too, and introduce interesting characters with particular or personal problems involving multiple steps to complete.

Other activities like combat training and even machine racing are more fun and carefree and help break up the action from the main story. The game has tons of collectibles hidden away in Old World ruins which act like mini-dungeons with their own challenges and puzzles to solve. Some even require special tools you get as you play, so you will sometimes need to come back later on in your playthrough to complete them. 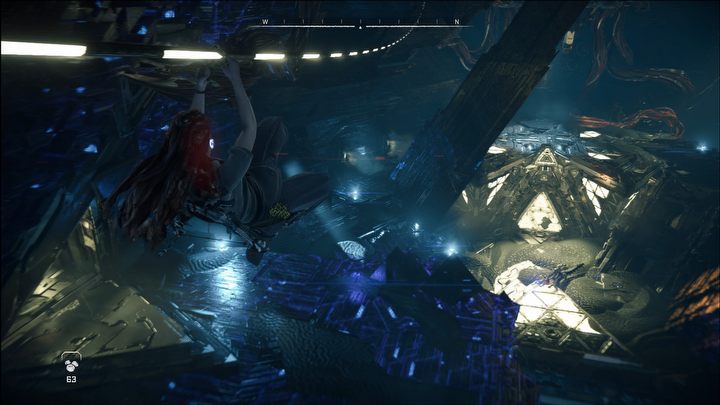 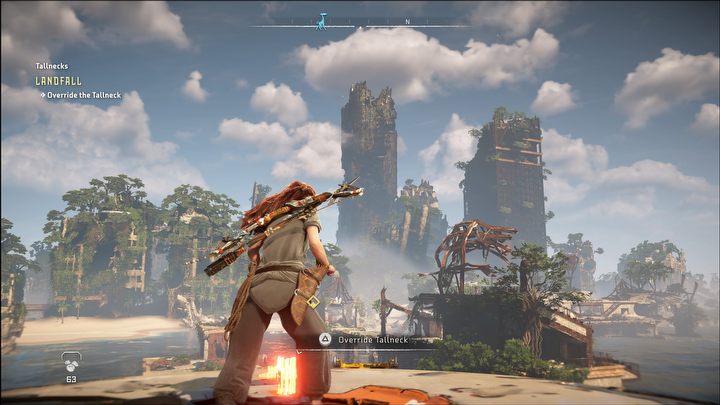 If you played Zero Dawn, you will feel right at home with the game’s combat system as the same UI returns allowing you to change weapons on the fly or to craft arrows or ammo mid-battle. You can still equip multiple weapons with different types of ammo to exploit an enemy’s weaknesses, of course, so swapping back and forth between weapons is as seamless as before. New ammo like acid arrows let you create dynamic explosions if you aim them at special parts on a machine or corrode an enemy’s armor letting regular ammo do more damage. New weapons like the spike launcher also give you new ways to attack enemies. These additions don’t change things much but offer you more versatility during a fight. 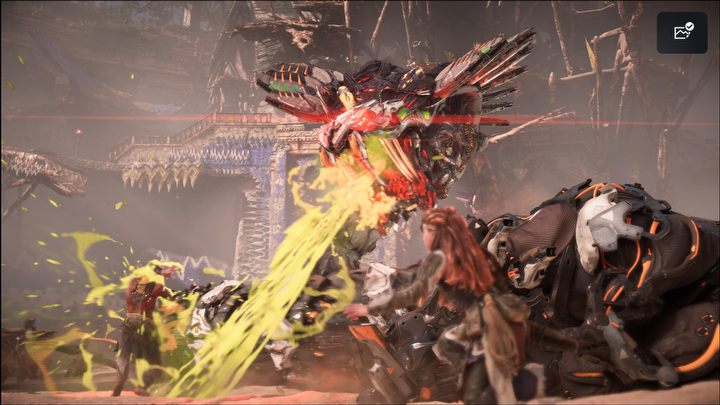 The game’s skill tree is also expanded even further with lots of new ways to increase your attack, defenses, and special skills that are attributed to specific weapons like triple arrows, bouncing bombs, or melee combos. A new valor meter now fills up the more you engage in battle or take a hit and can be then used to unleash special attacks that are unlocked and upgraded in their respective skill trees. One move, for example, lets you boost your defenses while another unleashes a damaging force field providing some useful area damage. Of course, arrows are still your best bet when attacking, but these new techniques can save you in a pinch and let you further choose how you want to approach a fight.

Horizon Forbidden West is a treasure trove of exploration and has everything the first one had but further expands and improves on it to give fans a more robust experience. Slight tweaks to combat make it more varied, dungeons feature even more puzzles to solve, and its riveting story keeps you hooked until the end. Its somewhat of a cliffhanger ending will leave fans wanting more, but suffice it to say, this is a must-play for any PlayStation 5 owner.

As mentioned before, most quests will involve some serious fights against giant machines, and Forbidden West introduces new ones like the Shellsnapper, Slitherfang, and Tremortusk that are tough but a blast to take down. Each of these fights tests your skills and makes you decide how to defeat them. Will you use elemental attacks to exploit their weakness, use tear arrows to remove their armor, or knock enemies down with a charged melee attack and then hit them with a critical strike? Fighting fellow humans, unfortunately, is less dynamic and typically involves mashing melee combos for close-range damage. To remedy this, the AI is now smarter and will counter your attacks if you keep repeating them forcing you to change up your approach. 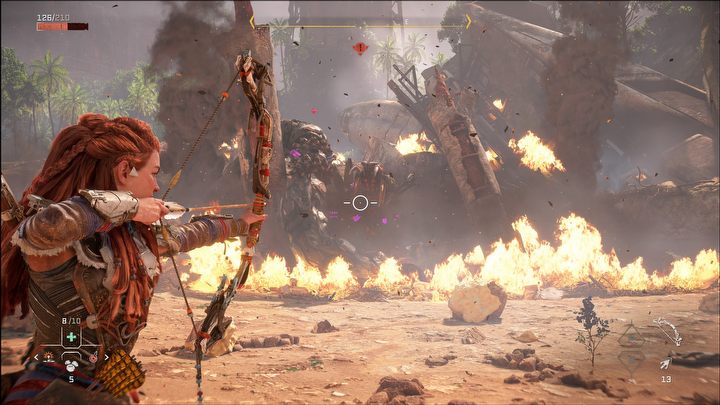 Exploring the Forbidden West is a sensory treat on the PS5 with Aloy’s world looking like a post-apocalyptic masterpiece. A lot of detail went into designing the new tribes she interacts with, but even the bleak wilderness of the West looks beautiful in certain angles. The many biomes you will explore have their unique charm to them, and the map keeps it diverse and varied. Its play area may be just a tad bigger than Zero Dawn, but it more than makes up for it in the amount of collectibles, side-quests, and areas you can explore like new cauldrons to free or Vista Points to discover.

Characters look more realistic and cutscenes feature movie-quality voice acting that it hard to not skip the dialogue even on trivial side quests. What’s more, Aloy is once again your guide during quests often thinking to herself how to solve a certain puzzle or providing you with hints on what to do next. It’s a nice addition and an impressive display of Ashly Burch’s vocal talents.

I do want to note that I played the game during the review phase when many graphical issues were still being worked on. This means that I experienced the screen often blackening out for a split second when entering a new area, audio cutting out, and a blue hue during certain cutscenes. At times, Aloy also got stuck looting an item and the issue would only resolve after restarting the game. These issues are expected to be resolved with patches leading up to the game’s launch.

Horizon Forbidden West is a treasure trove of exploration and has everything the first one had but further expands and improves on it to give fans a more robust experience. Slight tweaks to combat make it more varied, dungeons feature even more puzzles to solve, and its riveting story keeps you hooked until the end. Its somewhat of a cliffhanger ending will leave fans wanting more, but considering how good Forbidden West is, the wait for the next Aloy adventure will sure be worth it.