There's still some time left before the next generation of consoles is launched, but leaks about new devices surface on the network almost daily. A piece of info that was officially confirmed by Sony itself pretty early on, talks about the components. The second-generation AMD Ryzen octa-core processor paired with AMD Radeon Navi graphics card will be the heart of the SoC (system-on-a-chip). Thus the chip isn't that much different in terms of architecture from what we saw in PS4 and Xbox One  it's still a single module. If this happens indeed, PS5 will get a shared memory for the entire device, which will allow for a far superior performance compared to even the fastest RAM. We do not have specific information about the amount of memory itself, but I think that anything below 16 GB is unlikely. 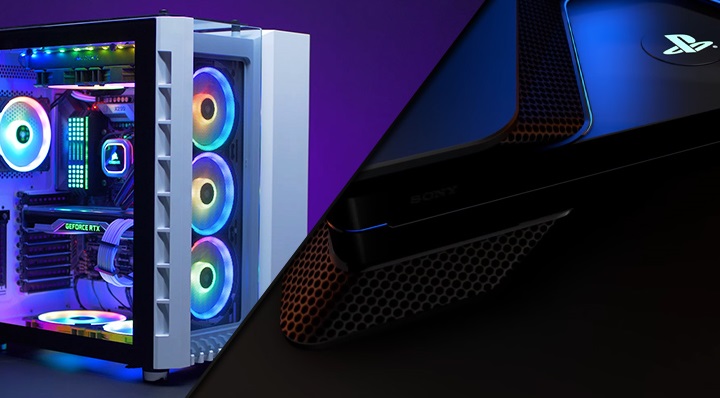 In this article, we merely speculate about how PC will compare to next-gen consoles in 2020  feel free to express your opinions in the comments below.

Additional information is related to mass storage. Sony is keeping up with the times and getting rid of HDDs in favor of the much faster SSDs. This is by far the most welcome change for players, as it will seriously reduce loading times for levels and objects. Also, it won't just be some SSD  it's supposed to use the NVMe interface that has potential of outperforming the popular SATA. Of course, whether the manufacturer (rumored to be Samsung) will use the full potential of the new interface and actually toss a much faster SSD into the new toy remains a mystery. We don't know anything about its durability, manufacturing technology, or indeed the performance itself. One thing is certain, however  if the disk will be significantly different from SATA-based ones, we can be sure that devs will want to load information from the disk on-the-fly during the game, which will may ultimately end the era of conventional hard drives.

A PC with such specs in 2020 will be significantly more expensive than PlayStation 5 as it launches. Indeed, five hundred bucks can barely get you a PC equivalent of a PS4 Pro.

Earlier, I mentioned the video card, the Navi-series Radeon. The PS5 reportedly supports real-time ray tracking, but we don't have information yet on whether this will be done programmatically or by means of hardware. Despite what Nvidia commercials say, ray tracing doesn't need additional cores to operate  every video card on the market is suitable for that. The only problems are performance, optimization, and patents not limited to own hardware  something the company in question has been notorious for. Thus, if ray tracing is software-based, calculating the potential performance of the PS5 GPU should be pretty easy  based on the current Navi graphics processors. However, if it turns out that the solution for ray tracing will be hardware-based, it will be simply impossible to have a PC comparable in performance to the PlayStation 5  not because of the performance will reach such unattainable levels, but simply because the lack of hardware solutions available for PCs.