Hello everyone. My name is Adam, and today Ill be your guide in the Museum of Video Games. Here we have our newest exhibition: economic strategy games, once a backbone of the industry. Caesar, The Settlers or Tycoon  tell me, is there anyone who didnt hear about these games back in the 90s? To my personal dismay, the genre was neglected and reduced to an old-school niche much like the RTS or point-and-click adventure games. Admittedly, the niche is rather substantial  open-world action games might be all the rage now, but that doesnt mean theres a shortage of fans of economic strategies, point in case being the success of the independent RimWorld, the recognition received by Planet Coaster or plenty new games vying for the title of Transport Tycoons spiritual heir (such as Transport Fever or the recently announced Railway Empire).

Another studio thats not afraid of dusting off the legacy of The Settlers is the French team at Shiro Games, thus far known as the developers of Evoland, a wildly interesting RPG featuring a journey throughout the history of the action/adventure genre. Their newest game, entitled Northgard, has recently debuted on Steams Early Access. Fortunately, the devs didnt take the shortcut here either and instead of just reiterating old solutions (and hoping the players sentiment will do the rest of job), they extracted the essence of the old games and seasoned it with their own ideas, creating a new-old game. Also, 92% of positive reviews on Steam is a powerful statement. 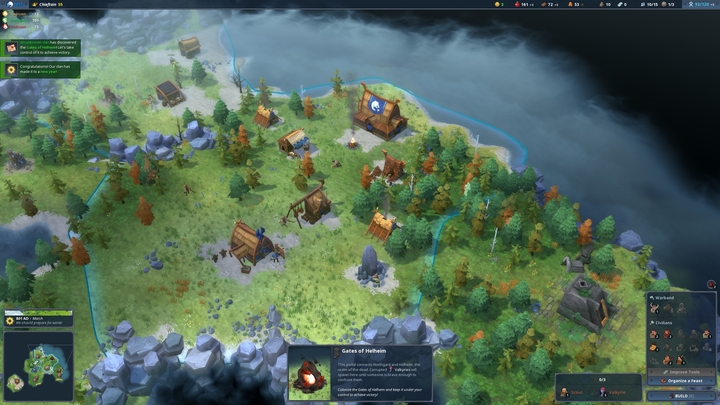 The ghost of settlers past

Lets start at the beginning  Northgard is a strategy game available in Early Access, in which you command a Viking clan with the aim of obliterating your enemies. Currently theres only one single player game mode available, where we set the rules, proceed to a randomly chosen map and face our opponents as well as the forces of nature (exposition to low temperatures may prove more deadly than the most ferocious of your neighbors). In the near future, the game will additionally be fitted with a single player campaign, along with multiplayer modes.

The principles of gameplay in Northgard are very similar to those known from The Settlers, but in many aspects the game is actually closer to Majesty (although similarities to Age of Empires or Civilization are also inferred). The workers know very well what to do  the player can control them, but its easier to just give them orders and leave them to it. The lumberjacks will do just fine by themselves, and the precious wood will soon start flowing in. And so we erect buildings, conquer territories, collect resources, allow the population to grow and build armies  theres expansion, warfare and even a need to care for the happiness of our subjects. In theory, this may seem rather formulaic, and it could have been the case if the developers failed to implement a certain, very interesting, solution. 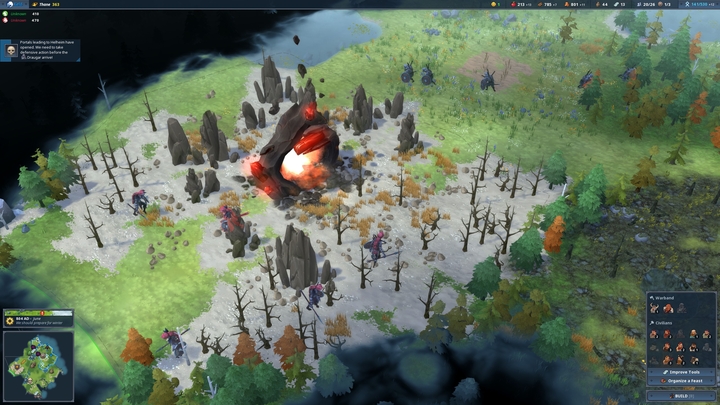 The trick in Northgard is that you can only erect several (from 2 to 5) buildings on a given area. Consequently, players are compelled to take care of expansion in order to develop  because you simply need space. Natural resources can also be depleted, which  again  forces you to set off to explore and find more. Thats a cool mechanic, and Im eagerly waiting to see it in motion within the multiplayer  it requires more economy-related planning instead of encouraging players to just spam the same buildings and units all over the place (units, by the way, which are never too plentiful, since every settler is extremely precious, and soldiers  as you might know  dont work in quarries).

The thing about Northgard to catch my attention were the charming graphics. Slightly cartoonish and very vibrant, they conjure images of Valhalla Hills, a game released two years ago. Im not really one of those people who say that a game must be pretty to be good, but in the case of this particular title, the visual layer nicely complements the gameplay itself, and underlines the Nordic vibes. Moreover, the developers not only managed to create good character models and a very compelling weather system, but also a very convenient interface. There naturally is some room for improvement here, but its quite nice that we actually got any interface, which is not that obvious in the realm of Early Access games (yes, Naval Action, Im talking about you). 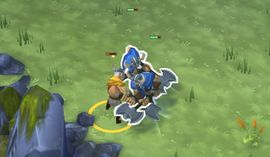 As weve already established, Northgard is still in development. Im hoping that the devs will work with increased effort on the AI and combat mechanics. Both of these are just plain mediocre. Battles are limited to quick, mass brawls, completely devoid of any tactics, and the AI takes a surprisingly long time to react to changes on the battlefield, which makes the whole combat rather easy. On one occasion, the AI deemed it necessary to continuously attack me with the mighty force of a single warrior. Of course, I allocated a small unit to repel those horrendous invasions. The AI, however, didnt seem to mind one bit that its constantly losing soldiers. 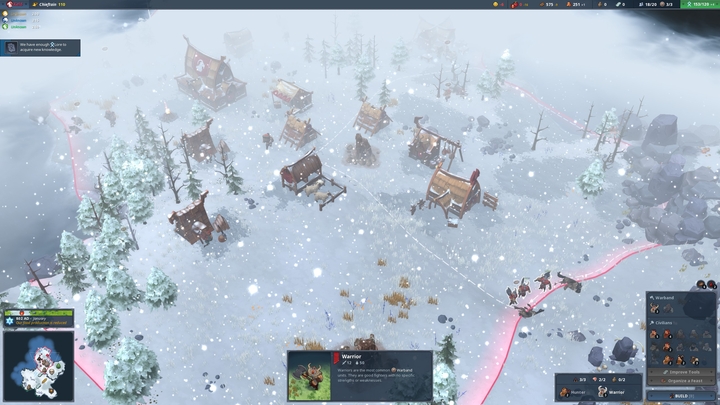 The restriction of the number of buildings is not the only novel mechanic. As the game progresses, the player earns knowledge points (in order to increase their yield, you can send people to work at a stone circle), which allow them to unlock new stages of the technology tree  to increase resource output or improve healing by shamans, for example. Add to that the fact that each clan has a different specialty; one may cope with harsh environmental conditions better than the others, while another will yield better warriors. Northgard has all the makings of a truly captivating game.

At the same time it lets emphasize that, in its current shape, Northgard is little more that a foundation  a very solid and promising one, that is. After a couple of hours you will know this game like the back of your own hand; each subsequent game takes place on a different map, but thats pretty much the only distinction we can make. The game could seriously use a greater variety of military units and buildings. Keep this in mind when deciding to buy this game in its current version  if you like to take active part in the development of a game, this Viking strategy is a pretty good decision. Its not very expensive, it works just fine and its a lot of fun. And what about the rest of the gaming folk? Well, I suggest you wait  in time, Northgard will simply become better; it would be a shame to dismiss this game just because its not quite in the can yet. 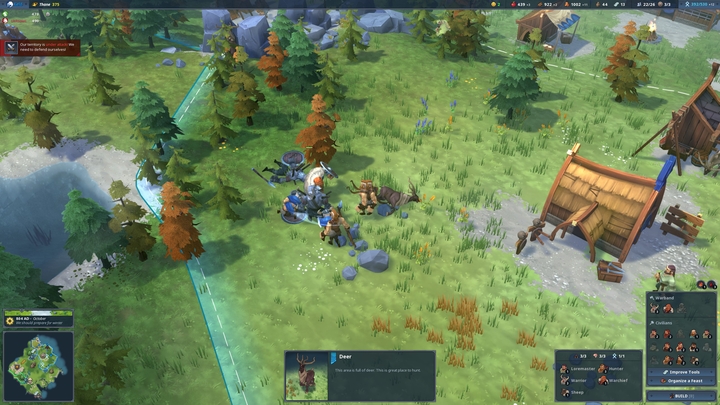 Northgard is an old-school game, and in the good way. First, the graphics are detailed and really enjoyable (no pixel art here!). Second, despite the fact that inspiration with the classics is very clear, the devs werent afraid of introducing their own novelties, which allow Northgard to make a great first impression, but right now  its nothing beyond that. After a couple of hours, theres nothing left to be discovered. However, I have high hopes for this one; the Early Access is very promising. It seems that the game wont end up like Valhalla Hills, where under the guise of a cool idea hid plain and monotonous gameplay.

I spent several hours with Northgard, and that time convinced me its a game to keep an eye on. Compared to Valhalla Hills, the strategy of Shiro Games seems like a much more complex game. As for The Settlers, the cult, second installment in that series was my favorite, hands down. Throwing the paths out of the window was a terrible mistake in my humble opinion  one which was responsible for the deterioration of the series. 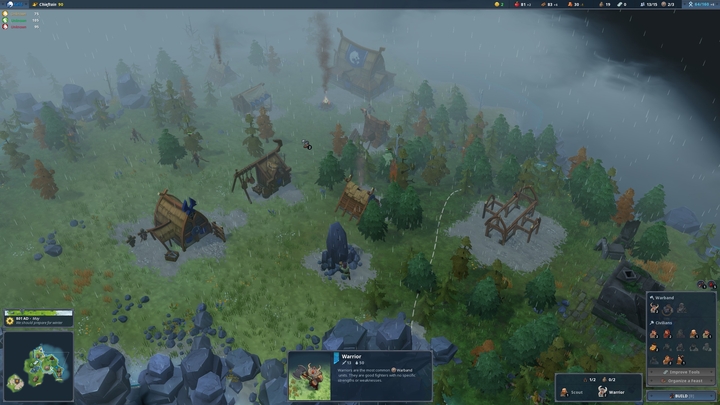 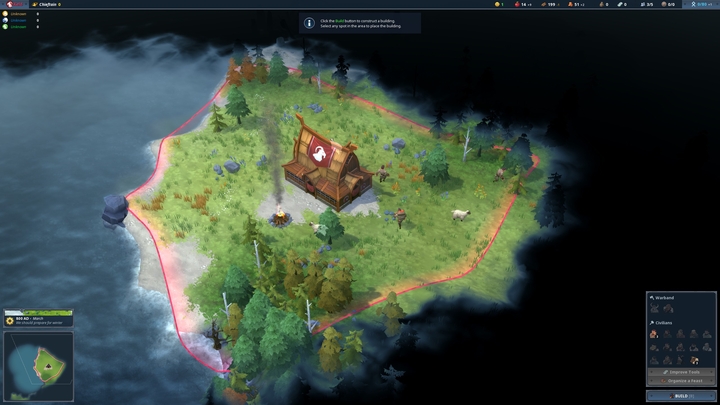 Northgard for PC turned out a pleasant surprise for our users - the current average score is higher than pre-release user expectations.