Survival games are a phenomenon that, in a way, was reignited, or even spurred, by Minecraft, whose undeniable success lighted moved imagination of numerous players, but above all, motivated developers and publishers who noticed the new bonanza. Then, there was DayZ, which gathered a loyal community, despite its pretty much abysmal condition. Games mushroomed, most in early access, where quite a few of them stuck, for example 7 Days to Die. Are things different this time around? Is the game, despite the "early access" patch, presenting a quality that could be envied by AAA productions? 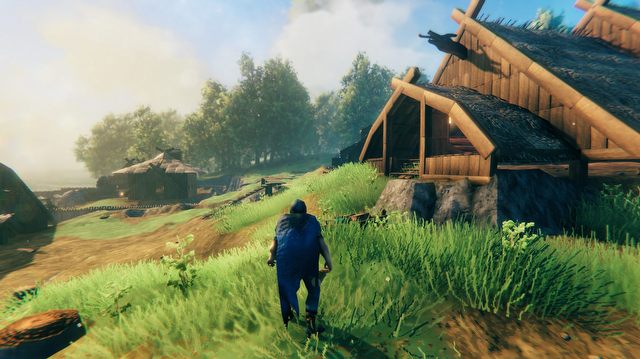 Let's be honest – at first glance, Valheim doesn't look particularly impressive. Rugged models, fuzzy, stretched textures, and the low-poly aesthetic used may even suggest a "low effort" approach in places. Moreover, gameplay seems to be an evolution of the idea known from The Forest or Rust – with the main difference being the setting, based on Viking culture and Norse mythology. This may not seem very appealing, as it makes the game look like it's simply jumping on a bandwagon. Vikings have been trending lately: Assassin's Creed: Valhalla, The Banner Saga, Bad North, not to mention a slew of games currently in production.

We get all of this as part of early access. This distribution model is not unpopular, but it's usually associated with lackluster gameplay, lots of unimplemented features and a bunch of bugs. Nevertheless, like invaders from the north, Valheim ransacked gamers' wallets and made its way into their libraries on Steam, boasting thousands of conquered hearts (at least 152,000 online players) and wallowing in positive reviews. Where did such a success come from? 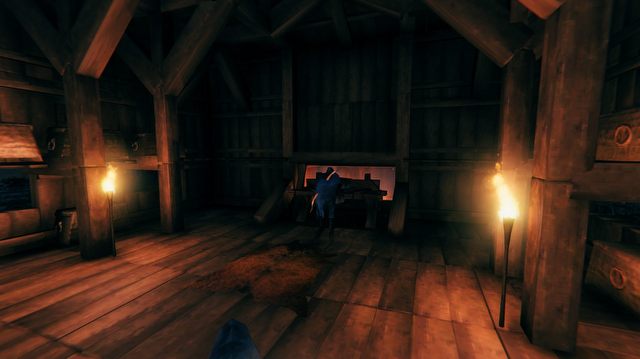 You can count on the Vikings

One of the key reasons for its success is certainly very solid delivery. The game is almost surprisingly stable (and not as in "stable for early access" – it really runs well). Unlike in most early-access games, me and my colleagues haven't managed to find a single bug in the game for the first 17 hours, spending most of the time in three, or four-person teams, which usually increases the probability of encountering glitches). We also didn't experience any crashes, freezes, or other unpleasant surprises usually lurking in unfinished games.

Overall, the game sets a golden standard of early-access quality, which could have been made easier for it because one, we haven't had any expectations of it, and two, there's been too many games in the past few months that were theoretically triple-A, yet failed to deliver quality even remotely similar to what we get here (yes, CP2077, we're looking at you). 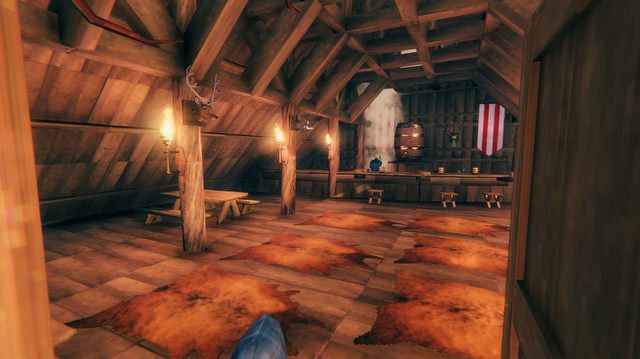 The Viking is not afraid of routine

Ok great, in addition to working, a game should also entertain. Given the scale of success, we know Valheim is doing it, but how is it doing it? I don't want to give you too concrete answers, as fun means something different for everyone; I'll try, however, to roughly outline how the developers designed the gameplay mechanics and what their purpose is, which should allow you to draw your own conclusions.

Let's start with the bane of practically every survival, namely the specter of endless "chores" – hunger, sleep and other needs of our character. Usually in these kinds of games, we have to make sure that the character is rested, nourished, healthy and ready for action. It's a ton of fun at first. We discover something new, we learn, we're challenged. Pretty soon, however, you reach a point where getting food or finding shelter is no longer a problem, which means the constantly depleting statistics turn into a frustrating and tiresome interlude that makes the game cumbersome rather than entertaining.

Valheim has taken a very intelligent approach, as our character doesn't require perpetual eating and setting up beds every five hundred yards. Instead of punishing you, the game rewards taking care of your hero by temporarily increasing maximum health and stamina, as well as their recovery rate. When we want to focus on expanding the village, we don't have to constantly refill all these stats, while when we prepare for a battle or expedition, one of the stages is a truly Viking feast, which is always equally fun (especially in company). And you're going to be organizing these expeditions because of another important agenda item.

Bosses. A large part of survival games are sandboxes, in which we can expand the base, adding new elements and gaining access to more equipment. At some point, however, you can realize that the gameplay loop is rather short and shallow; that these games don't offer any specific goal at the end, and you're starting to ask the question: "what's the point?" 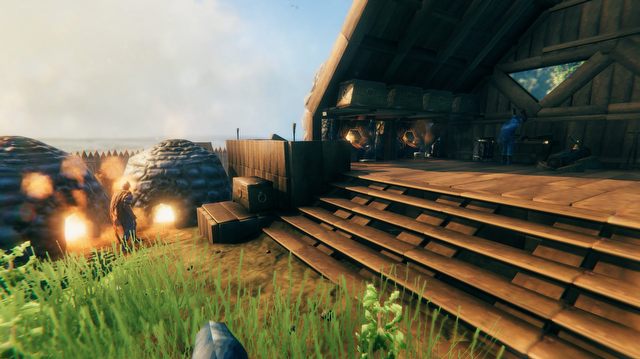 Valheim sets a rather generic, albeit quite riveting goal from the very beginning: we are Odin's chosen warriors, who, by summoning and defeating powerful eternal beasts, have to prove that they deserve a place in Valhalla. And so we prepare ourselves and arm with increasingly powerful weapons and armors in order to face more and more powerful bosses. And it's a damn good, though quite basic, gameplay loop. There's a distinct vibe, and there's a purpose that justifies gathering raw materials to expand the village with more elements. The combat system itself also offers a lot of fun, as to some extent, we're dealing with a souls-like standard: block-parry-dodge-attack. What's more, each defeated boss leaves behind a special trophy, the delivery of which to the appropriate place rewards us with a new magical ability.

A Viking needs a house

I already mentioned the village. The system of constructing buildings and gathering resources also offers a lot of fun. At first, our main building material is wood, the acquisition of which seems much more trivial than it is in practice. Mostly due to killer logs that have become the cause of deaths and the subject of lots of funny memes and stream shots.

Here are my impressions of Valheim – I was cutting down a tree, the tree fell on me, I died. That's why I can't be a streamer. ;-)

Be careful that the tree you just cut down doesn't crush you by falling, or roll into a pancake when it starts rolling down a hill. What's more, the more clever Vikings discovered that such a tree, felled at just the right moment, turned into a high-speed rolling instrument of destruction, capable of taking down mighty trolls or armored birch trees that would normally be an insurmountable obstacle for a novice Viking with only a stone axe. 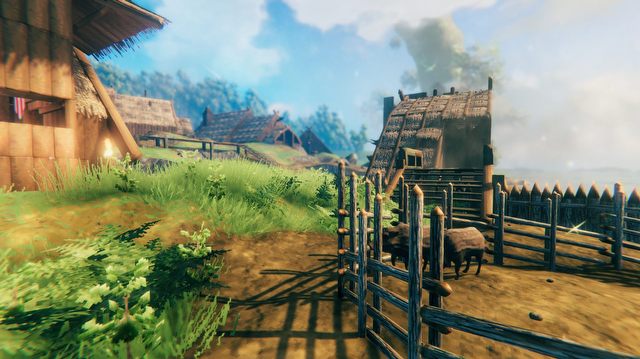 As for the construction itself, I'd like to add that the available building blocks allow building some great huts, residences, villages and fortresses, which can protect you from the dangers of the night. The game also does a fantastic job of creating an atmosphere of coziness and homey safety, not only through the dynamic shadows cast by light sources, but also through the audio setting. As soon as we leave the warm shelter to venture into the darkness of night, the peaceful, plodding music gives way to eerie silence and unsettling noises made by monsters lurking in the dark. The design of the buildings itself also makes for excellent gameplay with a few nuances that I'll leave for you to discover, as learning about them through experience is an added value (I'll just hint that, just like in real life, you shouldn't breathe in campfire smoke for too long because it's bad for your health).

To obtain higher-quality raw materials, it is necessary to organize larger expeditions. And each such expedition is a chance for a unique adventure in this randomly-generated world. It's worth mentioning that Valheim's universe is divided into different climate areas – we travel idyllic meadows, dark forests, high mountains and tundra wilderness. We also come across various ruins of settlements, buildings or even dungeons. The latter are instances separated by a loading screen, usually offering raids hiding valuable items and dangerous enemies.

So far, we have only seen ones with a fairly simple structure, but we have only explored those located on the initial island. The most important thing, however, is that the dungeon generation system has already been implemented, which means that expanding it becomes quite feasible and will certainly be easier than introducing it to the game from scratch (because let's emphasize, Valheim hasn't had a proper release yet – it's still early access). In addition to exploring dungeons and different climate zones, we'll also explore the sea, as the game requires you to build boats and rafts if you want to reach faraway lands. For the moment, though the maps are immense, they have their limits – or rather, they don't, because the world turns out to be flat and we face an infinite abyss at the edge of it.

As I wrap up my ode to Valheim, I'd like to discuss character progression. In Valheim, dying means losing not only your gear (which can be reclaimed at the place of demise in souls-like fashion), but also part of the level of abilities acquired by the character. These, in turn, are developed in the style popularized by The Elder Scrolls series – i.e. by using them. So we become more proficient in anything, from running, jumping, fighting with different kinds of weapons, to chopping wood and forging rock by doing it. Our stamina drains slower, we jump higher, etc.

It works like a charm. Especially since, unlike in most other games in this genre, the character here is completely separated from the game universe. This means that we can play the same character in our own private world, as well as join different servers or a friend's private game. The appearance, name, equipment and abilities of our hero are all preserved. This, of course, entails consequences such as "boosting" new characters by transferring materials and tools from the more seasoned one, but in a game focused primarily on online fun in a sandbox-survival style, it's probably more welcome than not. And if it bothers someone, they can opt out – the game lets you to create more than one character. 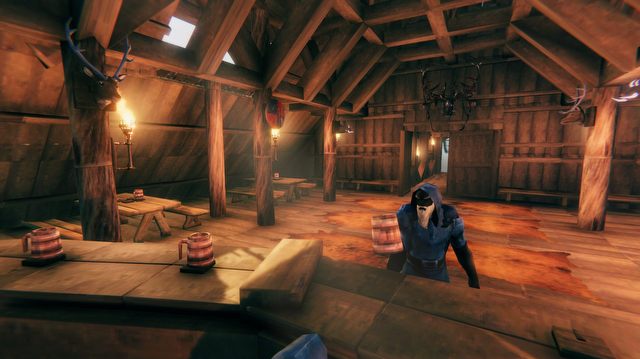 I haven't mentioned all the elements that make Valheim such a graceful game, but I think I've presented the essential ones, and the rest is better left for you to discover on your own. To conclude, I'll just mention that while you can successfully play the game alone and even enjoy it, I'm strongly convinced that the real magic of this production is revealed in cooperation with at least one other person. I can, however, in good conscience recommend this title to every enthusiast of the genre, and what's more – it's an example of how "early access" releases should look like, because it doesn't feel like we're dealing with some kind of technological demo, but rather with a full-fledged game, whose QA tests were properly conducted before its release on Steam.

Game design, streams, podcasts, columns – all of that! He plays challenging positions and Marvel's Avengers.

A failed colonization attempt sets off a survival adventure on an uncharted planet. No worries though – we have our wits, tools and… a potato?