AWAY: The Survival Series Game review

Whether you watched them on NatGeo, Discovery, or currently on Netflix – there is something utterly hypnotic about watching a nature documentary and seeing its intricate, highly complex systems work seamlessly across the ecosystems. Whether it’s the music that plays in the background or the wise-sounding narrator who teaches you things you never knew about the tiniest insects in the rainforest or a species of fish that has existed for eons – these shows can be both alluring and educational.

That feeling is what Away: The Survival Series tries to convey as it lets you play a sugar glider trying to rescue his family all while trying to survive in a post-apocalyptic world that features familiar dangers. Conflict, music, the narrator – the ingredients are all there for a stellar show, but sadly, this series needs major refinement if it’s ever going to take off.

The sounds of nature 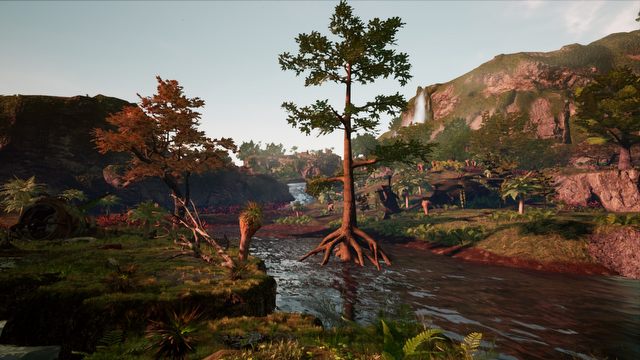 As a playable documentary, the game does a great job of making you feel like you are part of an episode on the biology and ecosystem of the sugar glider. Right away, you get a tutorial of your controls, which also serves to introduce you to its behavior, diet, and ability to glide through the air. An affable narrator comments on the various traits and characteristics of the marsupial and also provides some insight on your surroundings and the various creatures you will meet. When the action picks up and conflict arises, the narrator changes his tone and reminds you to act hastily.

The overall sound design is one of the highlights of Away, as it really captures the essence of a documentary and helps make its world come alive. You can hear waterfalls in the distance, various insets chirping in the trees, and the rustling of leaves and grass as you go past them. Even its cutscenes elicit emotion and feel quite cinematic thanks to their dynamic music. 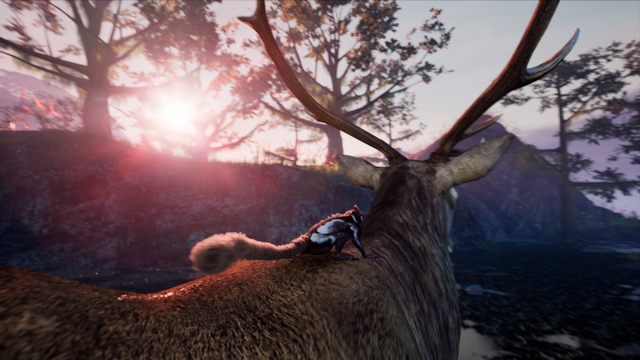 What’s also intriguing about Away is that it takes place on a version of Earth that has been ravaged by climate shifts which have eradicated the human population. As you travel through the lands, you can see vestiges of humankind in the form of rusty airplanes, old signs, and even holograms you can find (more on that in a bit). The world doesn’t feature any alien flora or fauna, so it still feels like the world we live in, but you can’t help but feel like it takes place in a foreign world. Its visuals and landscapes look impressive despite running into some framerate issues during certain, busier parts. 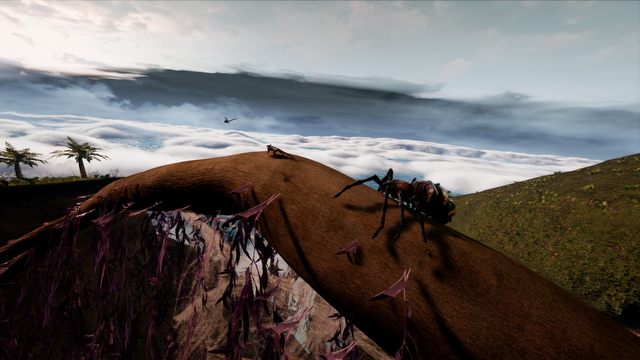 In spite of hinting at something more, the game never goes in depth with its lore and leaves it up to you to figure out how and why things came to be. This will make you want to explore the world and discover more on your own, but the story follows a strictly linear path during its four to five hour length, so you can’t freely explore, and if you do, you’ll realize there’s nothing really out there to see.

In addition to its short story, Away also offers an exploration mode that lets you play as a weird spore with the ability to possess any creature you encounter. This lets you play as an ant, lizard, or even butterfly, and just fly around the island to discover some hidden collectibles that humans left behind. This doesn’t amount to much, however, since you don’t have any clear direction as to where to go to find them. Controlling certain creatures also feels like torture as they can’t glide or run as fast as your sugar glider. 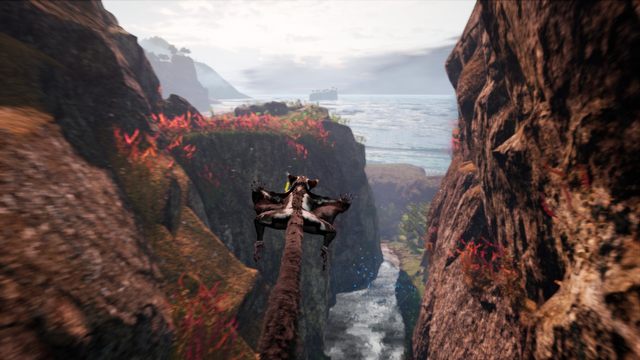 Your exploration is also heavily interrupted in part due to how simple, yet clunky the controls are. You play as a realistically-looking sugar glider, so your only weapons are your claws, and your special power is the ability to glide through the area after a jump. This would be all fine, except jumping (and landing where you want) is one of the most frustration things you will experience in this game. It is unpredictable and never feels responsive enough.

Away: The Survival Series sounds great on paper, as its nature documentary format gives it a charming quality you wouldn’t expect to work. And yet it does, to some extent. At the same time, its execution could still use a lot of work, leading to an adventure that tries to impress, but misses the mark due to some technical shortcomings that mar the experience. Its soundtrack, narration, and surprisingly detailed world make it worth checking out, but you probably won’t stick around for the next episode if things stay the way they are.

Because the sugar glider can climb surfaces sideways and even upside down, jumping off them can also lead to headaches since you may fling yourself off to your doom by mistake. You can, thankfully, simply point to where you want to land to auto-jump to that location, but you will still need to manually maneuver your jumps and glides on occasion, so it’s not a perfect solution to this problem. 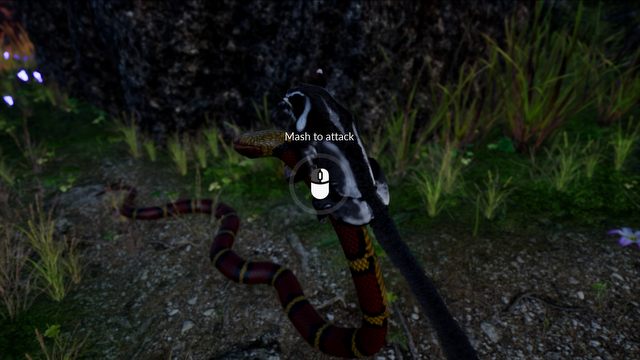 What’s more, the game’s camera poses another problem as it will often make you lose track of where you are and can even lead to some unexpected deaths. When you’re climbing a tree, the camera has a tendency to get confused and will try to force its way above you, despite you telling it not to. If you are upside down, it will contort itself horribly wrong behind textures and cause you to lose sight of where you are.

Combat, or moments when you have to fight another creature, also encounters the same issues due to the bad aiming controls and a camera that just doesn’t cooperate. There will be times when you need to beat up snakes that block your path by aiming at their heads after they lunge at you. Because the camera goes crazy after you dodge an attack, doing that will make you lunge and miss, unless you move the camera in time and aim it just right. It’s highly imprecise and oftentimes frustrating. These same aiming issues happen when attacking any other enemy, turning a simple act of button mashing into an annoying routine. 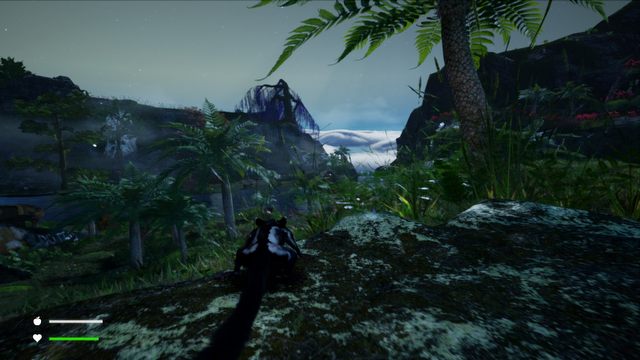 To round up its flaws, Away is also full of bugs – not the ones you eat, but the ones you wish the game would have ironed out before launch. I had to reload our file a couple of times due to the game not loading an objective. I also got stuck a few times underwater despite being close to dry land; I watched my character getting hit by an enemy and our health slowly decrease during a cutscene; and I even saw my sugar glider clip through some surfaces after a glide.

You want to root for the little sugar glider you play as – you really do – but the game’s controls and bugs distract you from enjoying the journey.

Away: The Survival Series sounds great on paper, as its nature documentary format gives it a charming quality you wouldn’t expect to work. And yet it does, to some extent. At the same time, its execution could still use a lot of work, leading to an adventure that tries to impress, but misses the mark due to some technical shortcomings that mar the experience. Its soundtrack, narration, and surprisingly detailed world make it worth checking out, but you probably won’t stick around for the next episode if things stay the way they are. 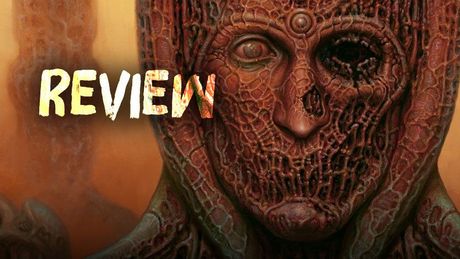 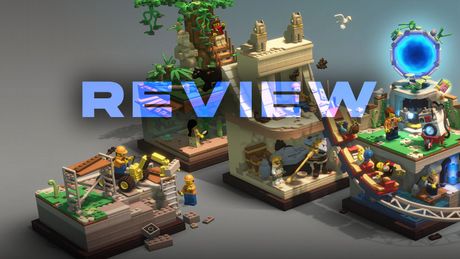 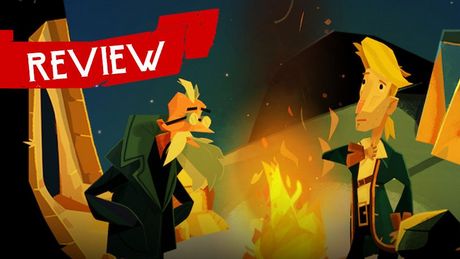