Blue Reflection: Second Light is the second game in the Blue Reflection series, developed by Gust, a division of Koei Tecmo games. This RPG follows a group of young women who have somehow found themselves in a strange, empty world. The protagonist, Ao, meets three others who have been stuck here longer than she has, and, for some reason, none of them can remember their life outside of this empty school building.

While it is an RPG, and there is some combat involved, much of the game takes a slower pace, revolving around the characters getting to know each other and exploring the world. Not long after Ao arrives, railroad tracks to a new environment suddenly appear, expanding the explorable world significantly. Ao and her new friends hope to figure out what this world is, why they are here, and if it’s possible to get back home.

Ao explains early on in the game that she has always wanted her life to be more special and exciting. Well, she is finally getting her wish this summer. Blue Reflection: Second Light is a cheerful and upbeat story about friendship and mystery. What power brought them here, and why? What happened to the other characters’ memories? Will any of them be able to return to the world they came from? There’s only one way to find out.

On the Topic of Fanservice 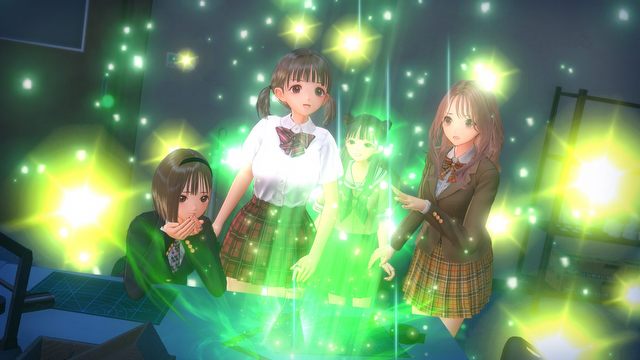 There is something that needs to be talked about first: fanservice. Fanservice is something included in a work of fiction explicitly to please fans. This inclusion doesn’t improve the story or the characters in any way, and is usually inserted in the hopes of boosting revenue. In a recent interview with TheGamer, Mel Kishida, the character designer on Blue Reflection: Second Light, explained that “...we’re taking a different approach in terms of showing how appealing these characters are without having to rely on fan service.” Kishida is an illustrator who not only designed the characters in Blue Reflection: Second Light, but also other Gust titles like the Atelier series. 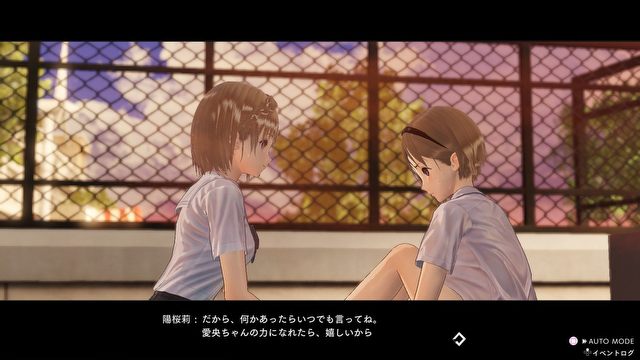 Despite the “different approach,” Blue Reflection: Second Light is not devoid of fanservice. While certainly more subdued than the multiple shower scenes in the original Blue Reflection, it is still bothersome. Especially considering that these characters are high school aged.

Before moving on to talking about the rest of the game, please take a moment to read this blog post (or at least open it in another tab and save it for later) on fanservice in anime that still rings true over a decade after it was written by novelist, blogger, and poet Foz Meadows. 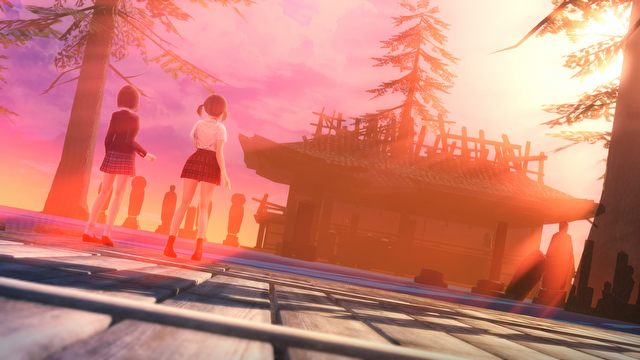 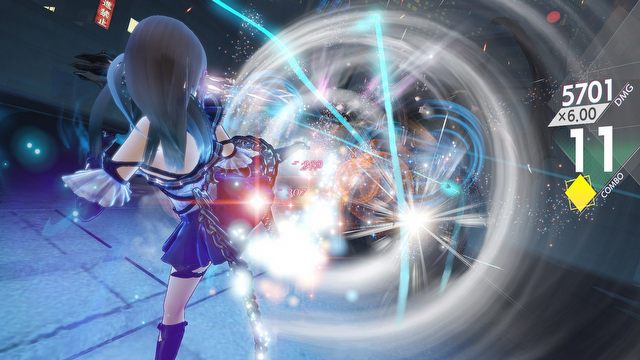 There are three major pillars of gameplay in Blue Reflection: Second Light: exploration, combat, and character interactions. The combat certainly escalates in difficulty and options as the game progresses, but it does take a backseat to the story and characters. While exploring the world the player can encounter monsters called demons. Ao, and two other characters will engage in battle, each building up ‘ether’ until they can use a skill to attack. The player controls Ao, but can also choose to either control the other characters or just let them attack when ready. The combat can often feel slow and repetitive, especially early on, but it does match the relaxed vibe of the rest of the game. 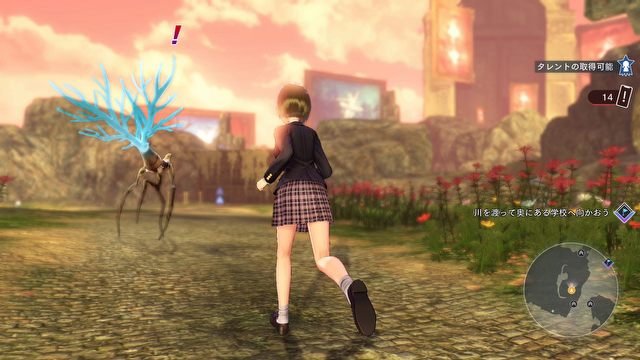 The characters often explore a separate part of the world that they call the FarAway. In this area there are various items and foods to discover that can be used during battle or used for crafting. Other characters will also send Ao on quests into the FarAway to find various items. This exploration does take the player though somewhat unique environments, but it rarely asks the player to do much more than walk around and find spots on the map.

The game focuses a lot of effort into character interactions. Characters gain skills from bonding with Ao, so there are in-game rewards for engaging with the other characters, which can be a nice way to get the player to invest in the story. However, most of these interactions require little input from the player aside from clicking to progress after each line of dialogue. The first hour of the game practically plays itself, but if that’s the kind of pace a player is looking for, then look no further.

A Mystery To Be Solved 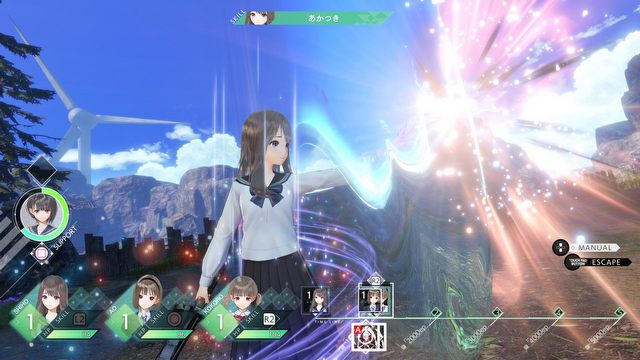 Blue Reflection: Second Light might be slow at times, but what keeps everything moving is the story, and the mystery behind it all. The broad themes of the game become clear early on: friendship, caring for each other, coming of age, and so on.

The second entry in the Blue Reflection series, Blue Reflection: Second Light, is great for anyone looking for a casual RPG. The combat can be slow and repetitive, and the fanservice certainly leaves a uncomfortable feeling hanging over much of the game, but underneath all that is a solid RPG with a captivating mystery at its center.

The mystery behind the fantastical aspects of the story, however, are what drive the plot forward. How did the characters get here? Who or what brought them here and for what purpose? How will they get out if they ever do? When the player and the character are both looking for the answers to the same questions, it can make the story a lot more compelling.

At times, Blue Reflection: Second Light can feel less like a video game, and more like a self-aware TV show. This isn’t because Ao sometimes narrates directly to the player, but because sometimes it can feel like the characters are putting on a show for the viewer rather than the viewer getting a glimpse into the lives of real people. This isn’t necessarily a bad thing, but it can feel strange to be so aware of one’s self as a viewer, while also being a player. 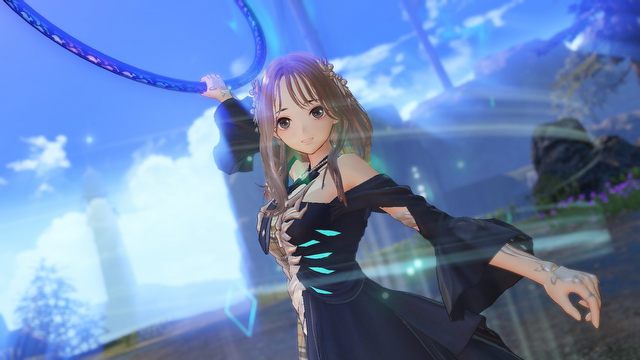 Blue Reflection: Second Light, at times, feels more like a visual novel with game elements added on than an actual RPG. This does work, as the plot and the characters are the true driving force here. The combat can be slow and repetitive, and the exploration mechanics somewhat shallow, but nothing draws a player in like an engaging mystery waiting to be solved.

It’s unfortunate that fanservice still plays a role in this series. Especially in a series about young women, illustrated by a man, it can leave an uncomfortable feeling over the whole experience. Fanservice such as this has a long history in anime and video games, however, in attempting to draw in fans, this cliché diminishes gameplay and the practice in general deserves more scrutiny.

Overall, the gameplay is somewhat straightforward, but still can be fun and engaging. For a very casual experience, and a captivating fantasy mystery, Blue Reflection: Second Light turns out to be a solid RPG. It’s just a bit buried under shallow mechanics and unnecessary fanservice.