Have you ever wondered what your life would be like if you were a bus driver? No? Well, good for you, but there are people out there who make it a living and take pride in it. Bus Simulator 21 is an ode to them and lets you live out that fantasy as the owner of your very own bus company.

To be successful, you need to purchase buses, set routes, and make money providing the customers of the city of Angel Shores an excellent commute. As your bus routes gain usage and popularity, you will gain more profits with which to purchase even more buses to expand your transportation empire. It’s a simple premise to an otherwise straightforward game of driving people around. 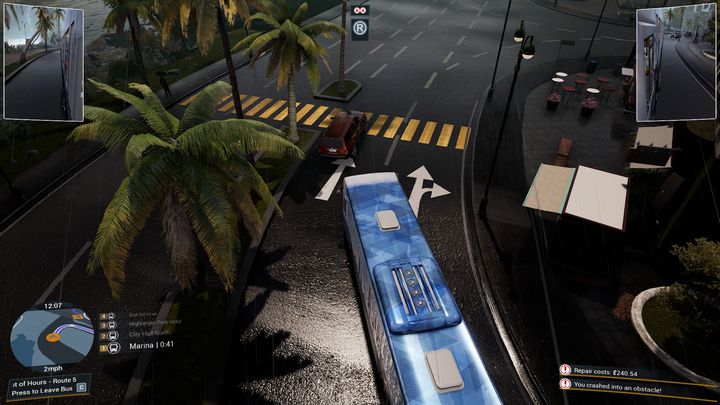 Like past entries in the series, Bus Simulator 21 is as close as you get to actually getting behind the wheel of your city’s bus line. Depending on the difficulty level you choose when you start playing, your controls will simulate all aspects of driving a bus. This includes opening the doors, turning on your windshield wipers, and even switching on your turn signals when approaching a bus stop. 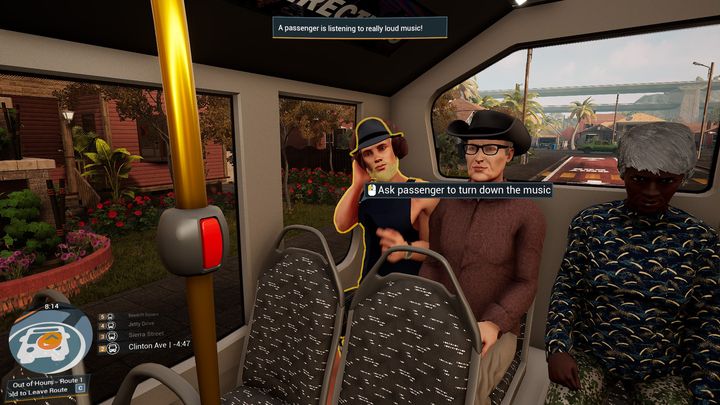 The harder the difficulty, the more buttons you will need to press and the more work you will need to do while driving. For instance, in the hardest setting, you need to do your own calculations when determining how much change to give a passenger who buys a ticket from you. The easier levels just tell you how much to give. Math’s hard, and this attention to detail lets you decide how complex you want your experience to be.

This complexity isn’t a bad thing either. In fact, even its easier settings still involve a fair share of multitasking when you are in the driver’s seat so you will need to quickly learn what every knob or button on your dashboard does so your bus service doesn’t get compromised. And yes, that also means dealing with some of the passengers that enter your bus. 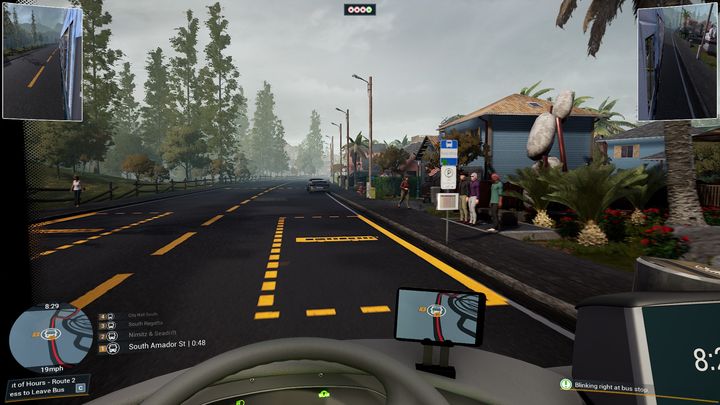 A normal bus route will consist of driving to various bus stops, opening your doors, letting riders in, closing their doors, and moving onto the next stop until your trip is complete. In between these stops you may need to sell tickets to customers, lower the handicap ramp for wheelchair passengers to get on or off, and even scold someone for listening to loud music. Tasks like picking up trash after your route is complete are not the most glamorous, but it’s these mundane features that make this simulator so spot-on. 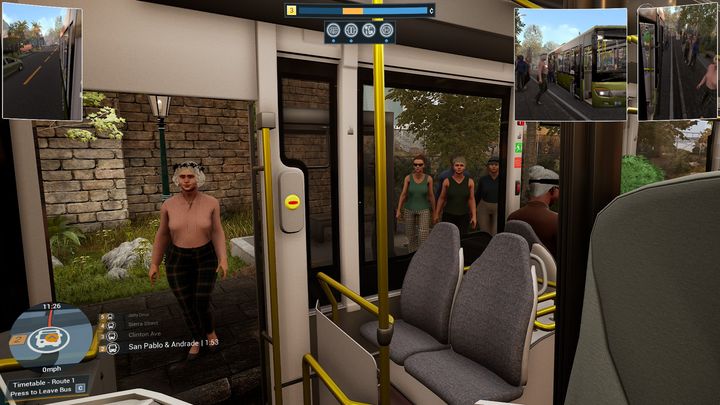 Even driving itself becomes a skill you need to master as it affects the overall rating of your bus route. Remember those bus tasks you need to accomplish? Well failing to activate the correct turn signal or missing the designated parking zone at a stop will incur you fines that come out of your paycheck. So drive like a crazy person, hit the curb, or even pedestrians and not only will your bus route’s satisfactory rating suffer but so will your net profit. 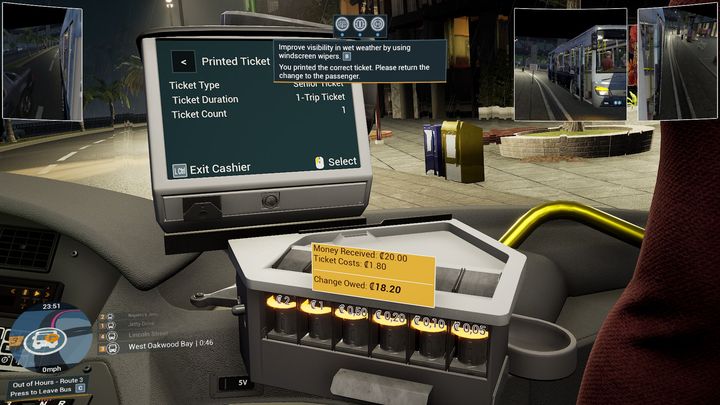 This punishment system makes the game feel a lot like a driving test but one that you are always a part of. It’s bad enough having to have someone grade you to get your license, but it’s another thing having the game ding you for running a red light, parking a few feet off, or forgetting to turn off your turn signal after leaving a parking zone. It adds difficulty to the experience and simulates real life so if you’re not a fan of following the rules of the road, you may not like Bus Simulator very much. This is a sim, after all.

That wouldn’t be a problem except that the other cars in the game don’t always adhere to these rules. You will drive behind cars that forget their turn signals and turn when you least expect it, crashing into you and costing you money. It’s a bit unfair, but the scary thing is real life is a lot like this, too.

Despite the steep learning curve of figuring out what every button does or realizing you need ample space to make wide turns, Bus Simulator is actually a very relaxing game. There is something peaceful about driving around on a rainy day with the only sounds you hear being the traffic around you. Of course, the game’s tongue-in-cheek humor is ever present in the random conversations you will also hear from your passengers, but you learn to appreciate it. 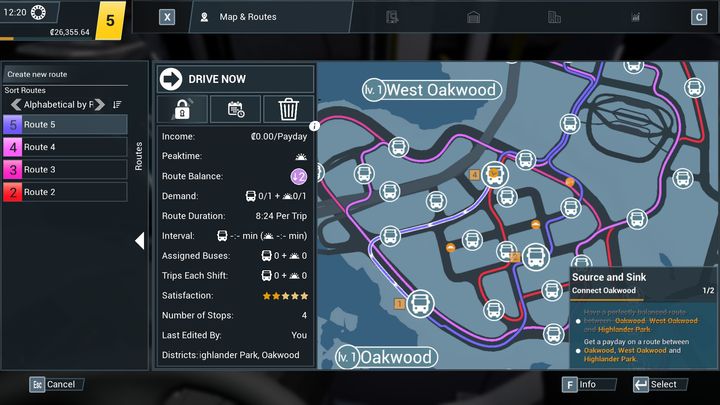 At any point during driving, you can open up your map and change routes or have one of your devoted workers take over for you. This lets you set the pace for which routes you want to drive and even lets you customize each route based on ridership and popularity such as adding a second bus to a busy route during peak times. You can manage your profits this way and really get into the nitty-gritty of your business if you choose to.

Or you can also simply drive around and enjoy the sights of your new city. Much improved from its previous entries – the European-inspired Seaside Valley is available in this game too – Angel Shores is modeled after San Francisco and features lively neighborhoods distinct with their own color palettes and architecture. Just don’t look into the windows of its buildings, though, or you will be greeted with questionable pixelated cut-outs for interiors. 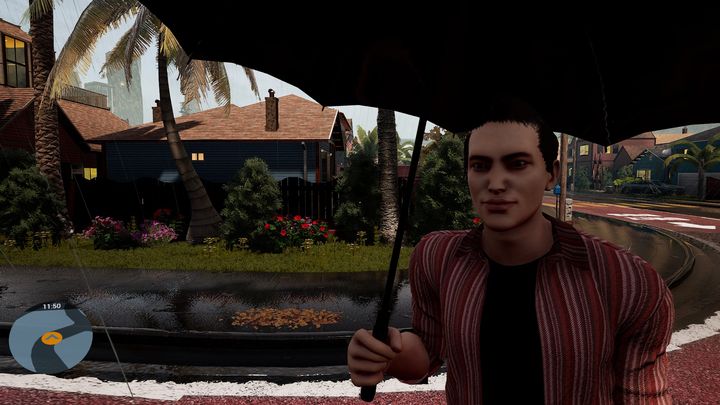 And while most of its visuals are much improved, “People Simulator” the game is not. Passengers still lack much in terms of animation or personality, and after seeing drones of them get into your bus one after another, they will begin to resembles zombies instead. Even your own character, thanks to very limited customization options, looks creepy up close, and how he runs can only be described as insulting.

When it comes to the level of detail found in your vehicles, however, it’s day and night. There are 30 officially licensed buses to choose from, each offering their own distinct feel behind the wheel, dashboard layout, and aesthetic flair. Plus, you can customize them even more with paint jobs, decals, and even seating textures you unlock by progressing in your busing career. The only thing you can’t do is name each bus, but we wouldn’t be surprised if that’s option in the future.

Stressful yet relaxing, realistic yet laughably stiff at times – Bus Simulator 21 is full of contradictions some will appreciate and others won’t understand. It succeeds in giving you a faithful recreation of what it’s like to drive around a bus all day and all the ups and downs that come with the job. It also keeps things as safe as possible causing it to be as mundane as, well, driving a bus all day.