The best recommendation for Children of Morta  the latest game by a previously unknown developer, Dead Mage, released by Polish 11 bit studios  should be the statement that the only drawback of this title is the unusual surname of main protagonists. Bergsons. It didn't seem to fit from the very beginning, but after a while this subjective flaw stopped bothering me, as I completely immersed myself in the fantastic universe of Children of Morta. I would underestimate and even humiliate the developers if I wrote that this might be the game of September 2019  because it's probably one of the best games of the year!

Family is the most important thing

The story presented in Children of Morta may, at least initially, seem quite ordinary. The land of milk and honey is haunted by ancient evil, described in the game as Corruption. Evil as usually  prevails, deceives, spoils water in the well and disturbs, so it should be cleansed by all means. Sounds familiar? Similar motives can often be found in games that approach the plot in a conventional way  offering little more than a trivial story as a poor background for arcade entertainment. Luckily for us, game developers did not take the soft option. The outlined fate of land of Rea is only a starting point  instead of trivialities, we get a deep and moving story that complements the gameplay. 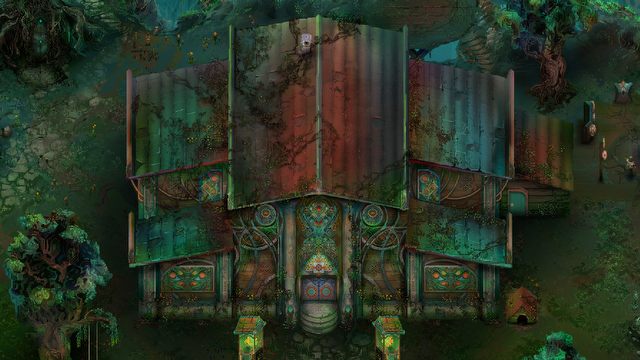 Every hero must have a decent cottage. Have you ever seen a hero whose house resembled a shed?

The protagonist is not a hero in form of the chosen one in shiny armor, but... The whole family of heroes  the aforementioned Bergsons, whose destiny lies in defending their land for generations. These characters do not say a single word  dialogues have been replaced by the narration (as phenomenal as it gets) of Ed Kelly, whose storytelling voice timbre enriches the fairytale character of the whole production. Family members, although they remain silent, are very characteristic, which is not only a result of fantastic animation, but also their interesting biography. Among them we can find, for example, a hot-tempered boy armed with daggers (Kevin), an old grandma devoting her life to science and research (Margaret), a young adept of the mysterious art of wielding fire and pencil (Lucy), or a wise and reasonable warrior with a warm heart, who smashes enemies with a powerful sword (John). I will not betray more, because it's a real pleasure to get to know the characters through their biographical notes. It's worth mentioning that there are many more characters in the whole story, although players can only take control over six of them. 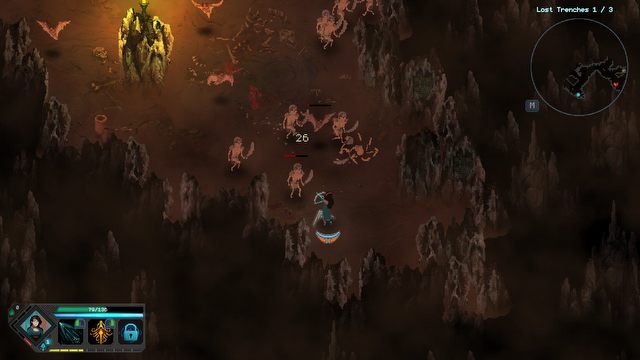 It was Linda's last battle. At least until she was resurrected and returned to Bergson estate.

Gameplay in the Children of Morta is divided into two complementary segments. In the first one, the player lands in the Bergson residence  this house serves as a base, where you can prepare for further expeditions. This is where the protagonists can improve their statistics for the morva collected during the game (I'd swear it's gold, but it turns out that "not everything is gold that shines"), review notes found during adventures or watch the daily hustle and bustle around the house. 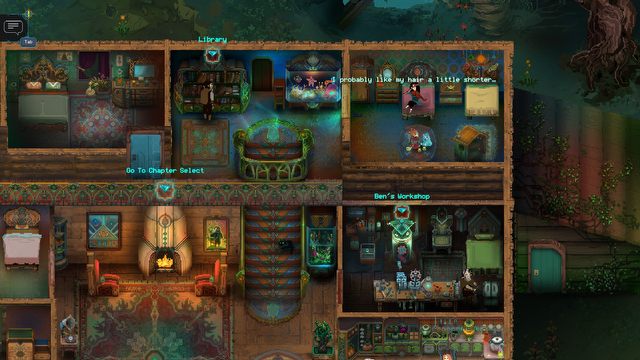 The family has its ups and downs, but you'll catch yourselves watching their daily bustle.

It quickly turns out that this is not the only important feature of this "safe house" (or maybe Full House), because this is where the game's narrative makes progress. After each death of the character (or less often  after completing several levels of a dungeon without death), you return home, and game rewards you with a cool cutscene. It is in the massive Bergsons' estate where you witness fantastic cutscenes  both that push the plot forward and those seemingly insignificant, which present the characters in situations from their everyday lives  painting pictures, arguing, having some romantic moments, doing sports like fencing or even having common dinners. Some cutscenes can be activated by pressing a special action button that appears in random moments of the game. It's worth launching them, because the plot becomes more complete and specific characters get a lot more expression!

The second segment of the game are dungeons, which resemble a classical hack'n'slash action. The Bergsons (single or as a team, because the game allows for cooperation) go down to the dungeon called Sanctuary (the association with the third installment of Fable is typical, but wasn't it called a "world" in Diablo?) to use magical portals that teleport them to locations which were attacked by evil corruption. The goal is to summon three Rei spirits that will help to open the doorway to the source of corruption. The fierce family traverses dungeons, unleashing biblical-sized havoc against hordes of monsters born in the darkness  sometimes skeletons, other times snakes or goblins. Like other hack'n'slashes, we will face stronger, elite mob varieties which have some special unique attacks. Also, you can expect some neat bosses at the end of every dungeon. 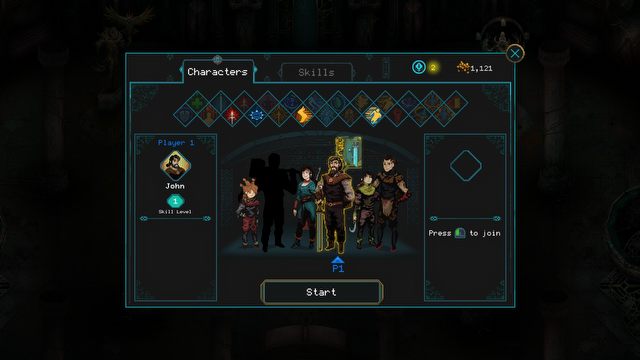 Not every hero is available at the very beginning of the game. Some of them will be unlocked as the plot progresses.

Combat itself is an extremely satisfying element of the game  each hero represents an archetype of well-known character classes. John is a warrior knight who can cover himself with a shield, Linda is a bow-equipped Amazon and Lucy will burn enemies with her fire magic  the difference, however, is not only about changing the weapon, but also the abilities of the character and it's playing style. The universal "energy" bar is responsible for another mechanics  for example, Lucy will consume this energy to create powerful tornadoes, and John's shield lasts as long as there is some energy left.

Children of Morta for PC turned out a pleasant surprise for our users - the current average score is higher than pre-release user expectations.