There are some remasters that the world needs, and some that are completely uncalled for. The former are welcomed with standing ovations, while the latter are met with venomous remarks or, at best, with a ”meh” and a shrug. It’s been a year since the official announcement informing that Naughty Dog’s work will be brought back to life by a new developer – throughout that time Crash Bandicoot N.Sane Trilogy was one of the most anticipated positions in the gaming menu. It’s been more than two decades since the PlayStation release of the first game, which means ages in terms of the industry, and the world is still not over the naughty bandicoot. And all that despite the fact that years after Naughty Dog had written off the brand, Activision, and later Sierra, wanted to milk the franchise for all it’s worth. The results were predictable: a stream of mediocre games that could hardly compare to the old Naughty Dog trilogy, or tetralogy, if you include the kart racing game Crash Team Racing. 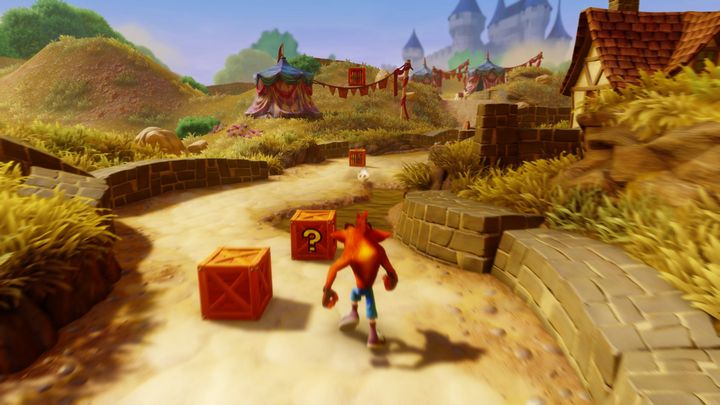 Meanwhile, the Crash announcement in Skylanders, followed by the plans of a remastered edition of the trilogy, sparked a wave of enthusiasm, something which the guys at Activision surely anticipated as they decided to hand over the project to the experienced team at Vicarious Games. After all, it was an iconic character to be resurrected, Sony’s de facto mascot. Still, the Japanese company never adopted the bandicoot as its official mascot, leaving the battle of cute critters to Sega and Nintendo and their respective iconic characters. Still, the importance of the bandicoot cannot be overstated for an entire generation of gamers who either grew up playing Crash or simply happened to be caught by the game and the changes in technology its PlayStation release prompted in the genre.

Andy Gavin and Jason Rubin, the founders of Naughty Dog, really wanted to make their next game in full 3D. They decided to make a groundbreaking platform game that would be “like Donkey Kong or Mario Whichever”. Their first step was the creation of a demo, which earned the name Sonic’s Ass. This humorous title was born from the constant watching of the protagonist’s behind. The next step was to select a protagonist. In the first draft, the role was to be given to a wombat named Willy, but eventually, the bandicoot was chosen. That’s how Crash Bandicoot was born, and after two more years of development, in September 1996, his game hit the shelves of American shops.

A Crash into a new age

As I’ve already mentioned, Crash Bandicoot N. Sane Trilogy is a set comprising the first three adventures of our favorite bandicoot. This includes the first installment, which was still somewhat rough, the second, Cortex Strikes Back (because the bad guys have a thing for returning and planning revenge on those who foiled their plans) and the third, Warped, in which we will travel through time and space to stop the evil Uka Uka. 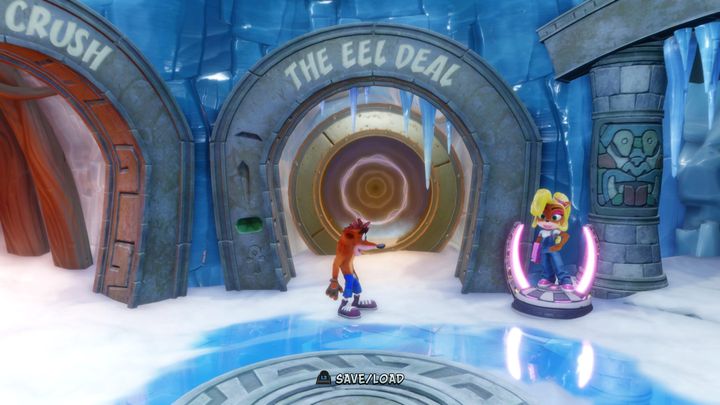 To begin with, it should be noted that the creators wanted to do more than just get the project over with, following the path of least resistance. The final result of their work is a game more than great. Graphics-wise it’s a Crash Bandicoot of our age, and while the same could be said for the original release, when Naughty Dog had to resort to a number of coding tricks to deliver that quality, the effect achieved by Vicarious Visions on PlayStation 4 is simply wonderful. This relates not only to the characters of Crash and Coco, who will accompany us across all three games this time, but also to diversified levels and surroundings. Whether we’re dealing with topical or icy levels, water or underwater, the game looks wonderful and pleases the eye. The remasters also include a time trial mode in all three games, adding even more fun.

Kinda different, but still the same

The creators thoroughly examined the old levels and transferred them to the remasters almost perfectly, changing only what was necessary for the gamers to enjoy that additional bit of smoothness. It was no simple copy & paste though, e.g. the armadillos in the jungle have taken a slightly more natural color than blue. But hey, we’re playing as a talking bandicoot, so who’s to say that there are no blue armadillos? 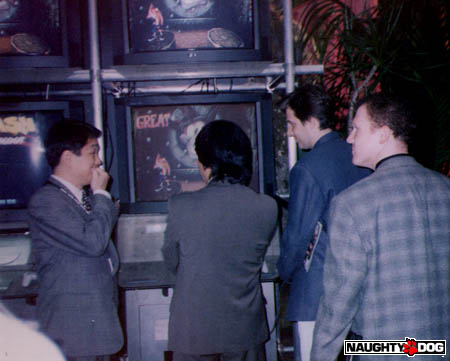 Also the gameplay underwent small changes. When we fall into a mole hole, the critters will attack us a bit differently than in the original. Truth be told, such changes can be noticed only when you do a side-by-side comparison. Without such experiments, all three games would be virtually indistinguishable from their old versions. Well, except for the audiovisuals, that is, as they also underwent a lifting. I was under the impression that the music was a bit enhanced, sounding a bit broader and deeper.

All those small touches make the game look and sound batter than twenty years ago. It may seem like something obvious in a remastered game, but we’ve seen so many utterly botched attempts, all long forgotten by now, that I believe there’s yet some weight to my words. I think that Vicarious Visions has given the franchise a new life, and I wouldn’t be surprised if Activision were to announce something completely new in the near future. Assuming of course that the remastered trilogy will make in to the top bestseller lists, which I’m certain it will. 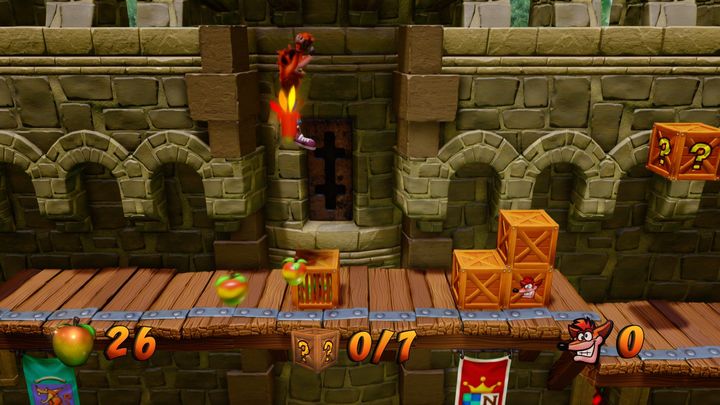 Thanks to the remasters, there’s a good chance that the franchise will see some fresh gamer blood, not just nostalgia-driven veterans. To be honest, the series had years to make its way into the collective consciousness of the gaming community, and even if somebody missed the game on PS1, they most probably recognize the character or at least the genre.

The gameplay mechanics are dated after so many years obviously. All the more so because the games included in the trilogy are classic tunnel games, severely limiting player’s freedom. Platform games of the 3D era mostly followed the competing Nintendo formula – semi-open levels connected by a common hub. That said, even a dated formula can be successfully employed when the creators do their job well. Even if the formula features sections that look like 2.5D or even entire bonus levels designed in that style.

Could have been better... 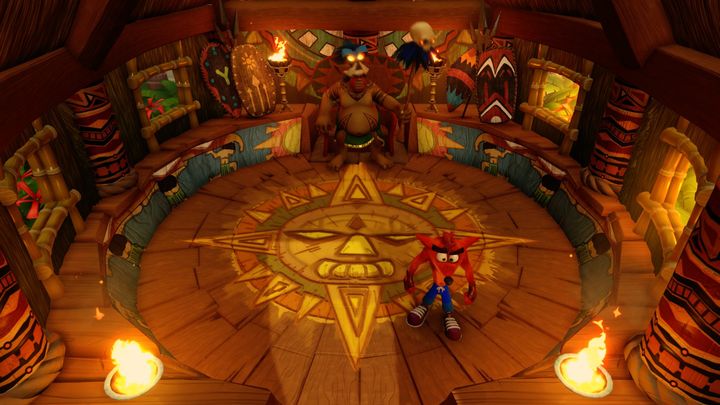 If I were to complain about something, it would be the fact that the game runs only in 30 fps. Which means exactly the same as the old games did, but… well, yeah. This particular element could have been easily upgraded and it would have served the games well. Without it, I got the feeling that the analog joy pad controls were a bit defiant towards my intentions, and I ended up switching to the more precise d-pad rather quickly. Well, admittedly it may have been simply my lack of dexterity, but if you feel the need to swear after yet another missed jump, I suggest you try out the good old d-pad.

Collision detection sometimes fails. Lack of precision sometimes leads us to standing right at the edge of a precipice or missing a platform by millimeters, which sends the character back to the last checkpoint. One more thing I find disappointing is the fact that the creators left vehicle controls exactly as they were in the old version, where taking the chance to improve them may have done wonders to the overall comfort and smoothness of some levels. On the other hand, why improve this specific irritating issue, and not many others, when we’re trying to be as close to the original as we can? That’s right, you’ll have to deal with it like your parents did in the second half of the ‘90s. 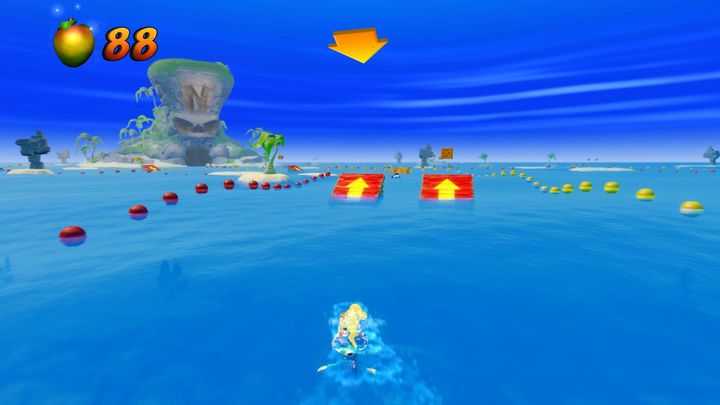 It seems like platform games are slowly crawling out of the hole they’ve been left to rot in for the last 10 years. Except for Nintendo games – they are alive and kicking, but that’s a story for another time. Leaving the Japanese aside though, we’ve had some higher-profile titles, such as the great Yooka-Laylee. It would be nice if the remastered adventures of Crash Bandicoot brought some significant, more tangible change. All in all, it’s a wonderful remaster, bringing back the memory of what used to entertain console gamers, but also equipping a classic genre in completely new clothes and giving it a chance to attract modern gamers – people who do not remember the golden age of platform gaming.

I spent a lot of time with all three games way back, when PS1 was the thing, and now I’ve spent further 14 hours with the remastered version, during which I managed to complete the first two games and chew through a big chunk of Warped. Of course, 14 more hours would be needed if you intend to complete all three games, collecting all the gems, crystals, and relics.

According to our users, Crash Bandicoot N. Sane Trilogy for PS4 was a disappointment - the expectations before the release were higher than the current average user score.