Crash Bandicoot N. Sane Trilogy for PS4, PC and etc. is a bundle of three classic platformers of Naughty Dogs team. It includes the first Crash Bandicoot, Cortex Strikes Back and Warped, all of which were remastered by Vicarious Visions studio, known from titles like Marvel: Ultimate Alliance 2, Skylanders Superchargers and a few other projects.

New versions of Crashs first adventures were completely remade. Developers did not simply overhaul its visuals, but created most of the content from scratch. This means redesigned levels, new textures and special effects, as well as characters models. Cutscenes were also modified, though they are still inspired by original versions.

However, Vicarious Visions did not stop there and added a new save system, letting players save manually or through autosave. Additionally, all games received Time Trial mode that originally debuted in Warped.

The story of all games that make Crash Bandicoot N. Sane Trilogy is rather simplistic, with players taking control of Crash, a titular bandicoot. He must face evil doctor Cortex and stop his plans of world domination.

Three games included in Crash Bandicoot N. Sane Trilogy for PS4, PC and etc. are three-dimensional platformers. Crash can use a variety of moves, including jumping and spinning, and those are used to traverse levels filled with traps like giant boulders rolling towards us. Wumpa fruits  an iconic element of the series  are also present. They can be collected on every stage and give us additional life after we collect hundred of them. Another thing we can find are boxes that we can destroy to obtain Wumpa fruits, lives or Aku Aku masks that help Crash in his adventure. Though one should be careful to not hit any form of explosives.

The unofficial guide to Crash Bandicoot N. Sane Trilogy contains information helpful in completing all three games that are part of the collection. It includes walkthrough of every level, trophy guide and detailed boss fights description. 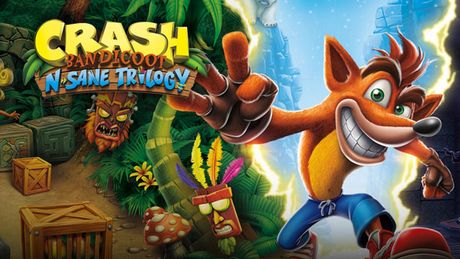 Crash Bandicoot N.Sane Trilogy Review  The Bandicoot is Back in Town

More than 20 years after the release of its first installment, Crash Bandicoot returns in a remastered trilogy prepared by the team at Vicarious Visions. Can this once-progressive title still hold its ground against modern titles?

Crash Bandicoot N. Sane Trilogy may be coming to PC

So far, PC players never had a chance to play the PS classic Crash Bandicoot on their platform of choice. This may change with the release of Crash Bandicoot N. Sane Trilogy.

So far Activision has only confirmed the PlayStation 4 version of Crash Bandicoot N. Sane Trilogy. However, there are hints suggesting the title is heading to Xbox One and PC.

Activision bragged that more than 10 million copies of Crash Bandicoot N. Sane Trilogy, the revamped version of the classic platformer trilogy, have already gone to the stores.

The sale of the new Humble Monthly has begun. In accordance with the website's tradition, the first titles included in the package for this month have been revealed. This time they are Call of Duty: WWII, Crash Bandicoot N. Sane Trilogy and Spyro Reignited Trilogy.

Everything indicates that a new game from the Crash Bandicoot series is in development. Unfortunately, it will not be a continuation or remake/remaster of the classic version, but a mobile game from the devs of Candy Crush Saga.