Cris Tales, the latest game from Columbian indie developer Dreams Uncorporated, is a self-described love letter to classic JRPGs or Japanese Role-Playing Games, such as Final Fantasy and Chrono Trigger. But Cris Tales doesn’t just look to the past. A major mechanic of the game involves using time crystals to travel between the future, present, and past. This power can be used to solve puzzles in the overworld and to defeat opponents in combat. 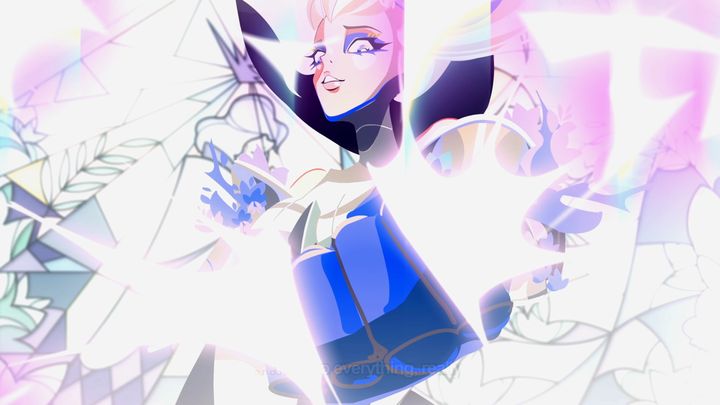 The characters and the world of Cris Tales are all beautifully hand-drawn and the game is absolutely dripping with style. The strange world of the Crystallis Kingdom has nothing but charm. From your wise animal sidekick, Matias the talking top-hat-wearing frog, to the unexplained fact that marbles are used as currency.

As the main character and budding time mage, Crisbell, you are able to see the possible futures and influence those futures. From early on in the game the player must make some decisions that will alter the course of the world, making each choice important. However, while there is a lot of great elements in this game, there are some that also slow it down. 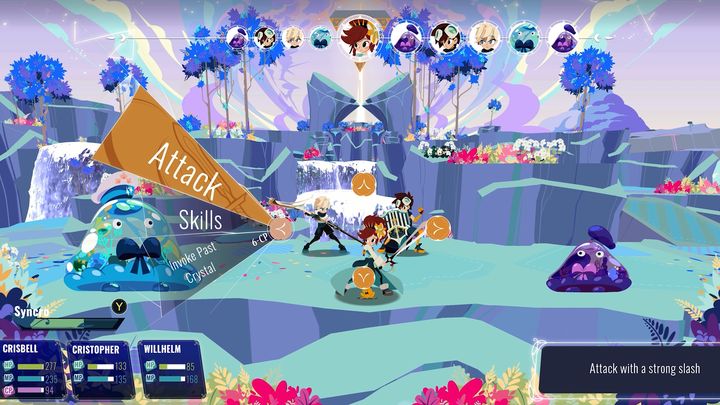 Cris Tales does have some exciting and engaging combat mechanics right from the start, but it doesn’t really expand throughout the game. As Crisbell, the player is able to send opponents into the future or the past depending on what side of the battlefield they are on. This can have interesting effects, such as forcing an opponent to take status damage, like poison, all at once by sending them to the future rather than just a little on every turn.

This is also an important strategy in the first boss battle. The combination of one character’s water spell on a metal shield causes it to rust when sent to the future, thus lowering the opponent’s defenses. This is a really fun combat mechanic on the surface, but in practice, it loses its luster, not unlike that metal shield.

Pulling off these combos in battle usually takes multiple turns for the setup and the payoff, so in the interest of time, it’s usually not worth using these strategies in every battle. Also, the game introduces these mechanics with a somewhat heavy hand. The first boss is impossible to defeat without employing this strategy, making it feel less like a clever idea or tactic and more like a one-dimensional puzzle. The game also walks the player through how to combine poison with the time shifts at the first opportunity, where it might have been more fun for the player to discover the combo on their own. 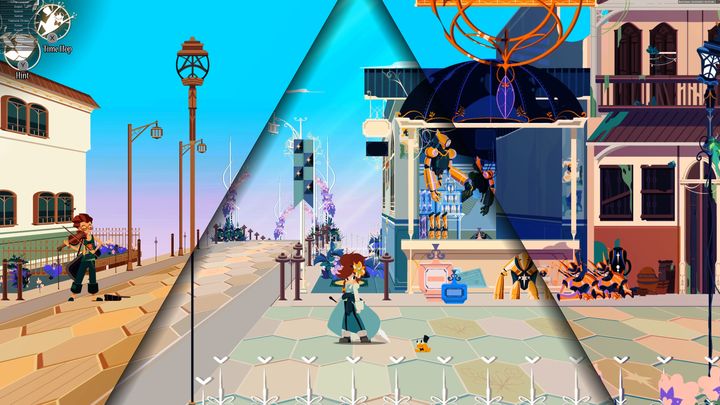 Cris Tales is entirely hand-drawn and looks downright gorgeous. From the character designs to the environments, it’s clear that plenty of time, effort, and passion went into the artwork of this game. Each character has a style that is unique to this game, but they are also still distinct enough to tell them apart. Just getting to know the designs of the environments and the characters, from the NPCs to the monsters, is quite enjoyable.

Aside from the beautiful artwork, the world of the Krystallis Kingdom is where Cris Tales truly shines. While combat may be somewhat slow and repetitive, the various communities within the kingdom have some more dynamic gameplay. As you explore the world you will come across some optional side quests that can end up having major effects on the world and the game, and possibly even some valuable rewards. 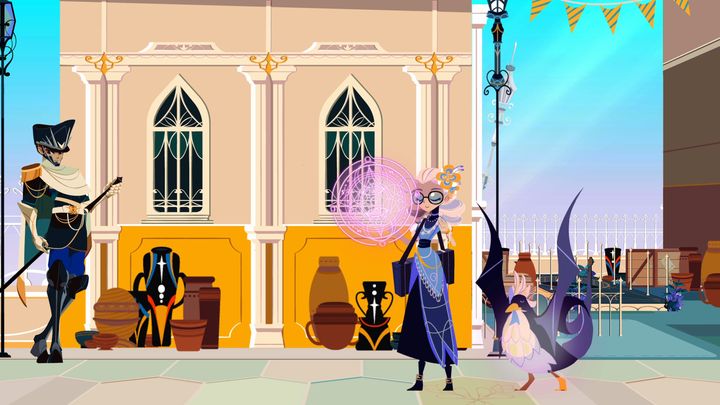 The freedom to choose, but also for those choices to have effects on the story, is central to what makes a good RPG. It’s unfortunate that the combat falls somewhat short in this respect because the action is always going to be an important part of the game for some players. Sometimes the only option in combat, which is to run from some of the random encounters rather than fight, feels like the only option.

This becomes especially apparent early on, which is a crucial time to hook a player into continuing the game. You are unable to stock up on useful items, such as healing items, before this first section of the game. So even if you win every fight you come across, the damage you take in the process will leave you struggling by the end. Also, don’t forget that this game does not autosave. 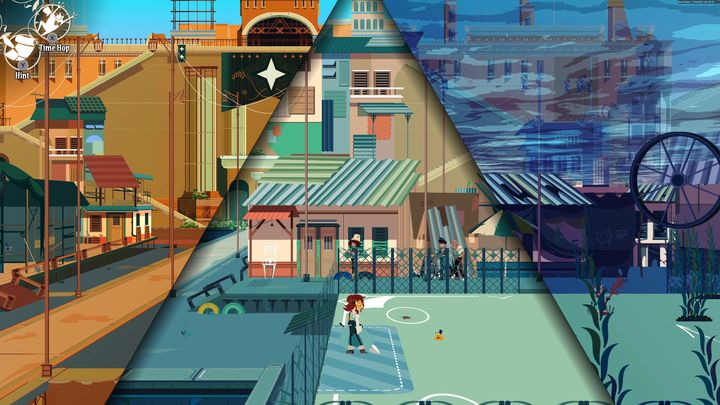 Frankly, it is somewhat ironic that a game that deals so much with time travel has an issue with time. It’s not unfair for most RPGs to expect some level of time investment and story commitment from its player, but there are several factors in Cris Tales the compound the issue. First of all, in a callback to many classic JRPGs, there is no autosave. The player can only save the game in certain situations, meaning that mistakes can be costly.

This makes the game especially unforgiving early on when the player is still learning the basics of gameplay. Playing through too many random encounters might leave you unequipped to continue, which will then force you to replay all of those encounters again. The argument here is that it makes the game more challenging when there are fewer checkpoints. This would be true if there was a plethora of new techniques and strategies to employ on new attempts, but currently, there aren’t enough different paths to take to success. This also wouldn’t be such a big deal if there wasn’t the issue of loading times.

In a game that asks a lot in terms of time and commitment from the player, Cris Tales has a real issue with loading times. This does seem to be more of an issue with the Nintendo Switch version than any other console though, to be fair. The loading screen pops up for any kind of transition, which includes traveling to a new location, and most importantly, anytime a random encounter pops up. With essentially no control over when these encounters happen, it can get frustrating quickly, and forge a powerful disconnect between the player and the game. 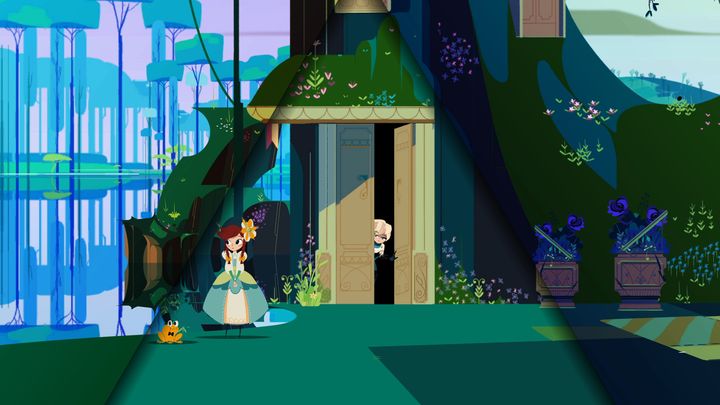 Cris Tales is certainly a game worth playing. There is a lot of excellent artwork, storytelling, and combat and puzzle experiences you won’t find anywhere else. Dreams Uncorporated and the other studios involved in creating this game worked hard and it paid off. They are certainly worth keeping an eye on for future titles as they have surely learned a lot from this production.

While an excellent modern recreation of other classics in the genre, Cris Tales, unfortunately, held onto a lot of mechanics that ultimately slowed it down. Fans of the genre might be able to push through the extraneous loading times, draining random encounters, and repetitive combat, but it will be hard for Cris Tales to convince new players to stick around for the long haul.

Overall, this is a great game that is bogged down by a handful of issues. Many of the problems with this game come from the genre it’s replicating but Cris Tales still manages to add some new and exciting mechanics. Going forward it will be exciting to see what new and creative ideas Dreams Uncorporated thinks of next.