Once upon a time in the fantasy land of Generia simple folk lived their peaceful lives under the merciful reign of king Bob. Sadly, the world tends to succumb to entropy, and so the peace was disturbed by a bunch of uncultured barbarians led by the fearsome Brog and his clumsy cousin Fuzgud. Their dreadful march was initially focused on annihilating everything that moved; soon, however, when rumors of an ancient prophecy reached them, their mission became much more profound. According to the prophecy, those who obtain a nipple of a sleeping deity will become gods themselves... Anyhow, regardless of the motivation or circumstances, you must first crush your enemies, so the objective remains the same…

That’s the premise of the story featured in the newest game by Vile Monarch, the developers of the absurd, yet pretty successful insult simulator called Oh... Sir!. This time, the Polish studio decided to test their abilities in the RTS genre. In Crush Your Enemies we lead bands of the abovementioned barbarians in quick battles that don’t take more than a couple of minutes. The graphics are very simple, bearing a resemblance to productions for GameBoy. We can either play solo, start a campaign, or participate in online multiplayer. At the same time, the game is a big, fat parody of classic fantasy tropes. 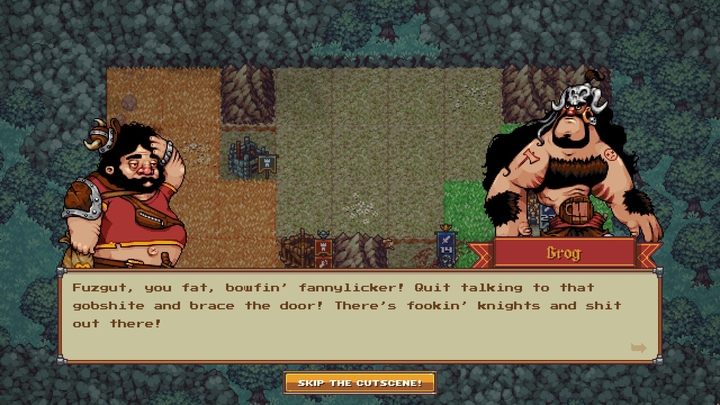 Violence is a solution

Battles in Crush Your Enemies take place on maps consisting of square tiles. The units can have as many as 50 pixel characters of different professions, starting from simpletons, a universal but not very powerful infantry, through archers, warriors, shield bearers, and quick scouts, to wizards, supporting the army in combat. Our units can easily move through our own territory, but upon entering the enemy’s turf, they first have to dig through the land to seize it. The initial numbers of our army are multiplied in impregnation huts, and the professions of our warriors can be changed in special buildings. When our troops meet the enemies, the fighting starts – the outcome is based on the number of soldiers and their profession – according to the “rock-paper-scissors” principle. Some battles also utilize a simple resource system based on food and wood gathered by the simpletons, allowing recruitment of troops and erection of buildings. 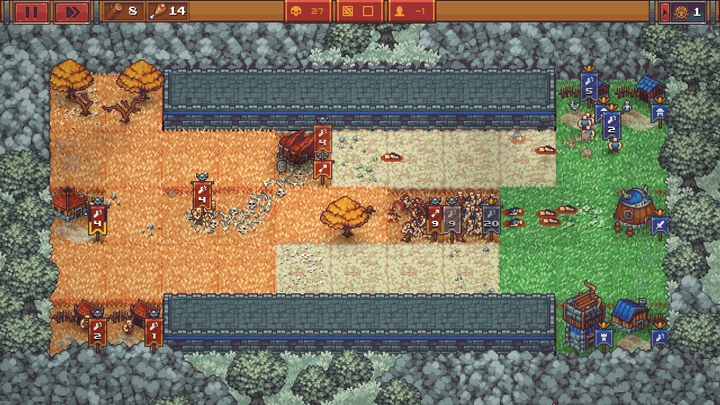 The pace of the battles is wild, so checking out the battlefield and working out a strategy before a fight is crucial. Apart from the paramount rule – “crush your enemies” – there are some additional objectives, and the final evaluation of the player’s performance is represented by the number of heads pierced on a spear (a bit like in Angry Birds). The marks the player gets do matter because the fame gathered in battles determines the availability of subsequent missions. Beer, produced in villages encountered on the way, also plays a part; we can buy some useful additional gadgets such as an inflated barbarian, or strengthening booze.

The battle system works pretty well, and the fights, however simple, bring lots of joy. The decisions have to be made quickly: how many warriors will “replicate” in the hut, how many will go to war, and which professions we should assign to them. Then there are key locations such as defense towers, which can be manned so that they fire upon enemies in their vicinity. The situation constantly fluctuates and requires frequent adjustments of our strategy. However, I’m under the impression that this game is suited for mobile platforms better than for PCs. The fact that the PC version is just a port from Android and iOS is evidenced by the controls, which clearly weren’t designed with keyboard and mouse in mind. Issuing orders requires frantic swoops of mouse if you want to keep up with the events, while performing an attack requires as many as three clicks, and splitting the army always means an obnoxious duel with the uncomfortable scroller. Combined with the fast pace, this creates delays which may cost us dearly. Too bad Vile Monarch haven’t developed a system of hotkeys or shortcuts, which could improve this situation. 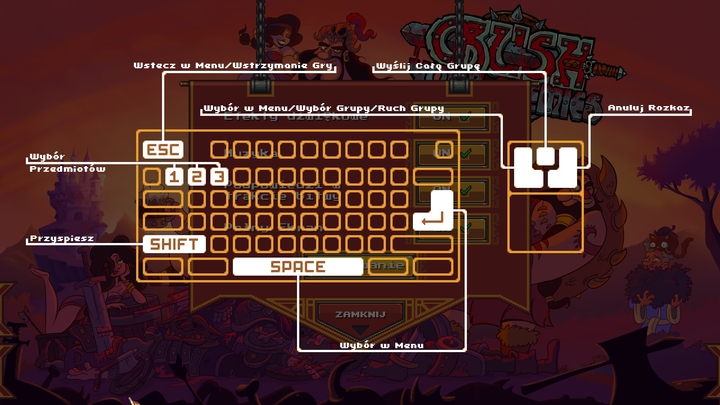 Admittedly, the AI isn’t a formidable enemy. In every battle, the opponents act according to a predetermined script, which is pretty efficient in itself, but once the player finds a loophole, the AI is totally baffled – hence the campaign can be finished in a couple of hours without much effort. But there’s always the multiplayer, offering skirmishes with random online opponents or with one of our friends, even across different platforms. 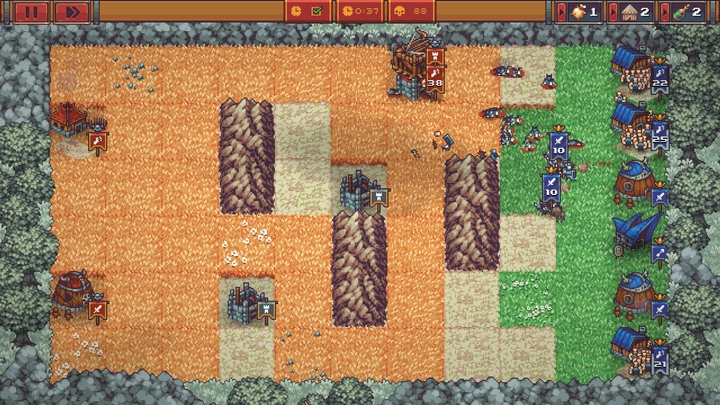 One tower keeps the whole enemy army in check.

In the solo campaign, Crush Your Enemies is full to the brim with barbaric humor, and the dialogues are a stream of colorful cussing and witty retorts. The game also references well-known fantasy tropes and cult video games. Many of the quips are genuinely funny, sometimes even brilliant, but the humor is uneven, and there are some jokes that fall flat and are poorly covered with a lot of swearing.

Visually, CyE is like a proper indie, sporting an oldschool look. The graphics, mixing pixel art and comic-book style, fit the mood well, but there’s nothing jaw-dropping about this experience. The music, on the other hand, is pretty nice, especially the orchestral and guitar pieces. 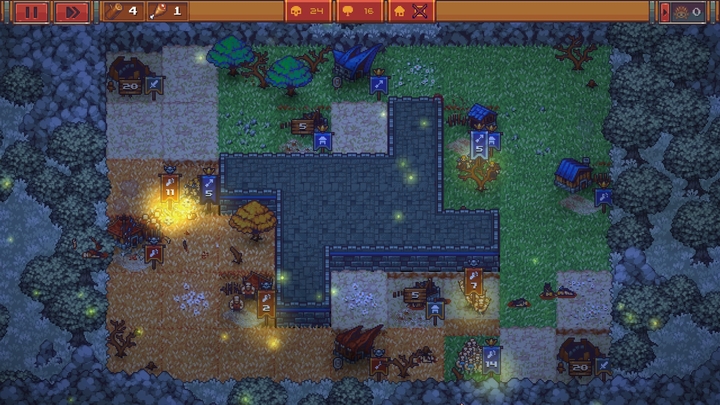 Evening combat is the peak achievement in terms of graphics.

Considering its level of technical advancement, Crush Your Enemies should easily run even on your grandfather’s pocket watch, and yet – to my, more than mild, surprise – it performed a slide-show when run on an integrated graphic processor, and it took an external GPU to tame it. This fact places a big question mark over office computers, and the game was aimed, among others, at people who use this kind of rigs and need some quality barbaric carnage to get their minds off looming deadlines and unfinished projects.

Stick to your tablets

Crush your Enemies has the potential for a decent success on mobile platforms with bigger screens, especially if the developers don’t change their direction and stay clear of microtransactions. I seriously doubt whether releasing this game on PC was a good decision. Crude mouse controls and a pretty high price for such a simple game (around €10 upon release) can really deter many PC players. Besides, who would want to sit in front of a computer just to play a couple minutes’ worth of a battle when they might as well do this on a couch, with a tablet in hand?