Crush Your Enemies for PC, iOS and AND is a real-time comedy strategy developed by Polish studio Vile Monarch, which is set up by former developers from 11-bit, who profoundly shaped Sleepwalkers Journey and This War of Mine.

The game does not make a point of introducing a campaign full of dramaturgy and twists. The developers decided to make the game as humorous as it can be  it mocks clichés of the fantasy genre. The action is set in a magical and downright boring land of Generia, which is inhabited by courageous knights, noble elves, and the jewels-loving dwarves. The player assumes the role of a leader of evil barbarians, who decided to smash the land to pieces, impale the enemies, plunder, and drink.

Crush Your Enemies published on PC, iOS and AND features standard strategy mechanics. You manage your resources, lead units to battles, and conquer the enemies land. The pace, however, is much faster than that in other games of this genre. The interface is simple, but still offers a wide range of strategy options. The production in seasoned by the equipment system and boss fights.

Crush Your Enemies utilises both an extensive campaign and multiplayer that allows for competing with other players. What is noteworthy, the game introduces cross-platform multiplayer, allowing users of different platforms to play together. 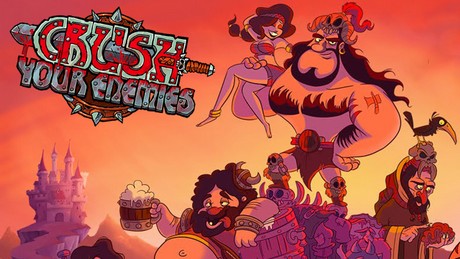 Citizens of idyllic fantasy lands, beware! A horde of not-so-civilized individuals have escaped the dungeons of a Polish studio, Vile Monarch, to pillage and plunder!