Cult of the Lamb Game review

On the surface, Cult of the Lamb is a very simple game with an adorable design that you just can’t help but smile at even when that means smiling at a cute little pile of vomit you have to clean up. Yes, even body fluids are drawn in such a charming way that make you go aww. And that’s saying a lot considering this is a game that features murder, sacrifice, and plenty of bloody battles—but this contrast is the key in making it such an appealing game.

Even its opening scene turns the concept of a “sacrificial lamb” on its head when your fleecy protagonist gets saved at the altar by a mysterious demon asking for loyalty and devotion in return. This marks the beginning of your journey to hunt down heretics, amass followers, and become the leader of your own cult. With so much to do and plenty of ways to enjoy the experience, Cult of the Lamb is dark, fun, and hard to put down.

Cult of the Lamb has two parts: a roguelike component that has you going on crusades to fend off monsters and colony management elements that let you grow your own village. Both are important in completing the game and saving your god who has been imprisoned by four traitorous bishops you eventually have to face. Your chances of survival also depend on how strong your cult is back home as the strength of your faith contributes to how strong your lamb is on the battlefield. It’s a marriage that remedies the repetitiveness of both genres but also gives you plenty of action in between the doldrums of managing a colony.

As with most roguelikes, each crusade you go on is completely randomized. Even your starting weapon and long-range attack will be a surprise until you start, but you do get some choice throughout your run to control your fate. Crusades involve clearing dungeons full of monsters until you get to exit where you then choose your next path until you reach the boss at the end. Here is where you also get some say in where to go as most paths leads to more fighting but others are boons for resources your colony needs like wood, stone, and berries. 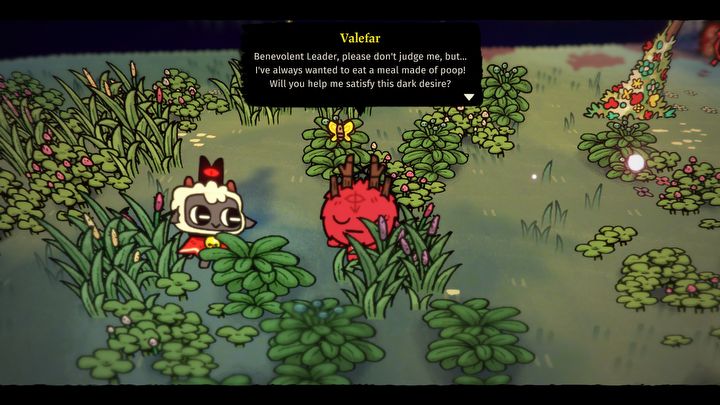 Finding tarot cards also can also be a godsend as these unlock special temporary buffs like more hearts, unique drops, or better critical hits. Your selection is still randomized, but this still lets you slightly shape your experience by choosing the perks you want. Some paths also lead you to new weapons that come with their own pros and cons. This means you may find yourself with a slow-wielding axe that can do massive damage or a weak knife that features insane attack speed.

Here is where the game tests you and also forces you to adapt to what you get. Because controls are simple—attack, roll, and perform a ranged attack—the key is mastering when to dodge and when to go in for the kill. Enemies are also as diverse as your weapons so you will need to memorize attack patterns from squids that home in on you to spiders that pounce on you from above.

Once you defeat the mini-boss at the end of each crusade, you will get rewarded with a new follower to bring back to your cult. This is how you grow you colony from the start as these crusades will always grant you with a follower in the end, and you need them to increase your faith, devotion, and to unlock access to other areas. Essentially, your cult is the source of your power. The more happy followers you have, the more you can increase your chances of picking up better weapons and even unlocking perks during crusades.

Offering a great balance of battling and managing, Cult of the Lamb offers you the best of both worlds and provides you with enough of each genre to make it an engaging experience. Its colony management elements may not be as intricate as you would hope, but it does offer a good amount of customization and freedom to shape your cult how you want.

Though not as robust as games like Stardew Valley, the colony management aspect of the game is quite impressive and offers you some respite in between all that hacking and slashing. Your home base is where your followers can pray to your statue to increase your devotion points, which unlock future structures that will further aid your cult in growing and prospering. You also have to remember that you need resources to build things so the game also suggests you be wise in what you build next. Sure, you can go crazy and build lots of decorative totems around your village, but that won’t put a roof over someone’s head. 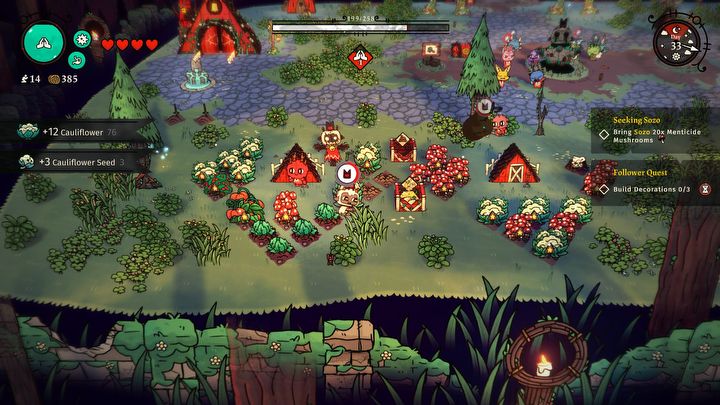 While not as stressful as planning a crusade run can sometimes be, managing your colony still requires you to put in the work and tend to your followers’ needs. Feeding them, picking up their poop, and even re-educating those who decide to disobey you are ways you can spend time besides just building stuff. Villagers get old and die too, so you can even decide whether your cult is one that believes in the afterlife or simply cut up dead bodies and have a cannibalistic good time.

Each day, you can also perform sermons to increase the faith of your cult, which in turn unlocks new combat abilities and perks you get during crusades like better weapon selections. Completing quests also can grant you with Commandment Stones that let you enact doctrines that help you shape your colony in various ways like increasing their work speed, making them be less affected by the death of their friends, or even unlocking rituals like sacrifices, feasts, or holidays to let your cult take a break and love you more.

These options let you be the benevolent or unhinged leader you’ve always wanted to be but I only wish there were more ways to actively make an impact on my cult besides manually selecting a ritual or murdering someone I didn’t like. It’s not like your followers interact with you or make a difference in your community so don’t expect that level of involvement or complexity besides the occasional defiant cultist. 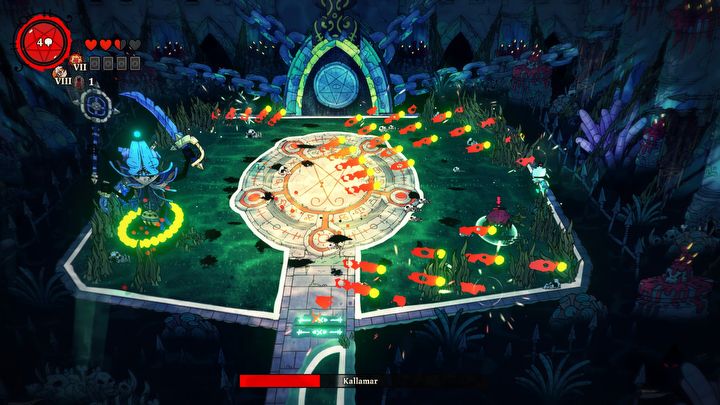 In addition to your home base, you can also explore other areas of the map to fish, barter, and even play a dice game to pass the time. These areas, while unique in their own way, don’t offer the same oomph that the colony building aspect of the game or its crusades offer. They do, however, give you the chance to purchase decorations, tarot cards, and play some mini-games, but you may wonder if they were just included to add some bulk to an already engaging experience.

Every area you visit in Cult of the Lamb is brimming with detail and charm that you can’t help but admire all of its characters, structures, and worlds. Your followers each come with their own randomly selected names, but you can also choose what they look like down to the species they resemble. The various biomes you visit ooze in personality and feature a rich palette of colors that beautifully complement the game’s hand-drawn aesthetic. Even its chill soundtrack, with its eerie, yet whimsical compositions, will keep you bopping. 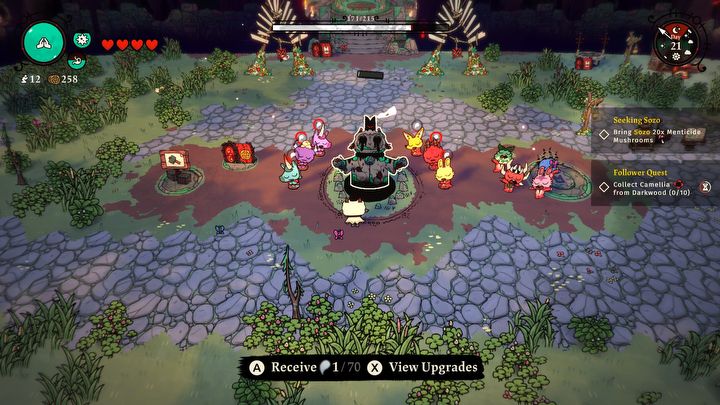 Offering a great balance of battling and managing, the game offers you the best of both worlds and provides you with enough of each genre to make it an engaging experience. Its colony management elements may not be as intricate as you would hope, but it does offer a good amount of customization and freedom to shape your cult how you want. Simple from afar, Cult of the Lamb is sure to challenge and delight you till the end. 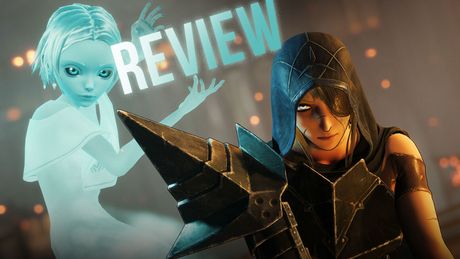 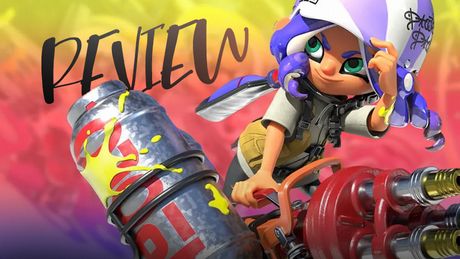 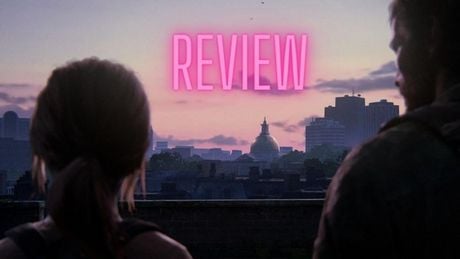