Every good villain seeks world domination. As cliché as it sounds, conquering the world and having everyone satisfy your every whim, whether they want to or not, is an evil genius’ dream come true. But despite what spy movies will have you believe, achieving that end goal doesn’t just happen to come together in the third act. No – you need to plan your crimes carefully, amass a fortune, and ensure you have a large enough army of loyal followers ready at a moment’s notice. At least, that is what a game like Evil Genius 2: World Domination will have you believe. 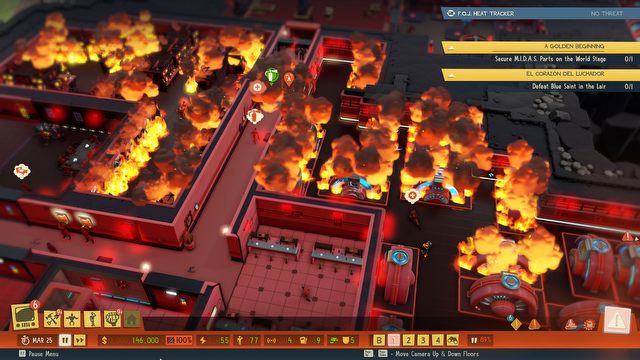 This sequel to the 2004 title follows the footsepts of the original, but you don’t need to have played the first one to know what’s going on. Evil Genius 2 is a robust, customizable real-time strategy simulation game that lets you play as one of four villains to rule the world. Your end mission of world domination is the same, sure, but how you get there is totally up to you.

Featuring a stylized aesthetic reminiscent of the Atomic Age of the 1960s with colorful backdrops, kitschy décor, and a cinematic soundtrack, World Domination will transport you to your favorite spy-fi films. The game doesn’t take itself seriously either, so you are in for a treat with its tongue-in-cheek humor and character conversations that are sprinkled in between missions. What’s more, each of the villains feature excellent voice acting that lets them come alive and truly showcase their unique personalities. 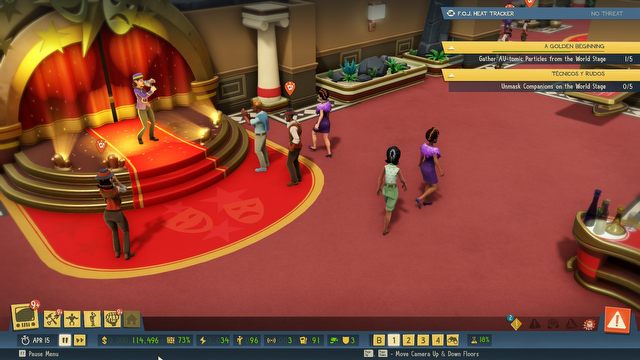 As an evil genius, you need to commit schemes under the cover of an unassuming casino on a deserted island. Gameplay consists of managing your island base, ensuring you have enough minions and resources needed to commit crimes throughout the world, and keeping prying investigators and soldiers who visit your island at bay while you go about your evil-doing. Schemes provide you with money and resources, but they also open up more objectives and missions for you to complete. There is a lot of manage at a time, but this is where the fun of Evil Genius 2 lies.

The most notable, and, perhaps, important aspect of the game is building your evil lair. You can choose from three distinctly-shaped islands to call home and build rooms that serve different purposes. For example, you will need to build a barracks for your minions to sleep in, a power station to house all your generators, and a vault to keep all your earned (stolen) gold safe. At first you will be limited to what you can build as more items open up as you progress through story-based missions, but as long as you have the gold and resources needed to build something, the sky’s the limit. It’s incredibly satisfying to zoom out and see your design come alive while your minions go about their day in something you designed for them. 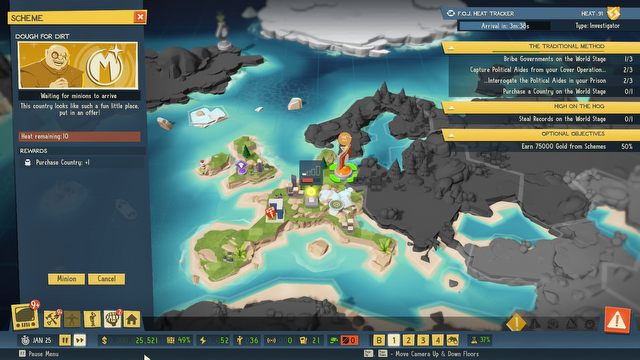 One of Evil Genius 2 core aspects is managing your minions to ensure you have what you need at a moment’s notice. It is up to you to decide if you want to train guards to help fend off intruders or focus on scientists to speed up your research into unlocking new traps and upgrades. These different types of minions let you control your lair the way you want so you can play the game engaging in combat with every trespasser that infiltrates your island, or you can simply focus on creating more socialite minions to keep them distracted in your casino before they even sneak past your entrance. The beauty of the game is that it lets you choose how you want to play it and lets you make changes to your strategy at a moment’s notice provided that you have enough resources, gold, or minions, of course.

This is also why you need to keep an eye on your minions to ensure they don’t tire themselves out. Thankfully, the game’s computer assistant Iris will alert you of any issues in your lair, so you have some time to fix things before they get worse. For some time, I wasn’t sure why so many of my minions decided and run away from my island, but then I realized I didn’t have enough morale-boosting stations to keep everyone happy. Iris didn’t tell me what to do, but instead, simply informed me of the deserters. Her alerts are great even if you know what you are doing as they give you time to prepare for invaders or to pause the game if you need to make adjustments.

Live as a villain, die as a hero 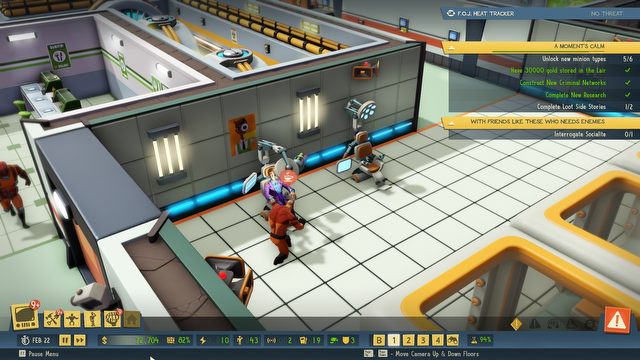 Compared to managing your base, Evil Genius 2 story missions are more straightforward and require extending your crime network throughout the world to open up new schemes and missions to complete. Each of the four villains you can choose to play as has his or her own aspiration for ruling the world and a special end-game doomsday weapon you need to build. The base missions you will be doing to eventually unlock these unique ones, however, are the same regardless of the villain. This means the initial part of any play through will be the same and even feature repeat conversations, albeit voiced by the baddie you choose. 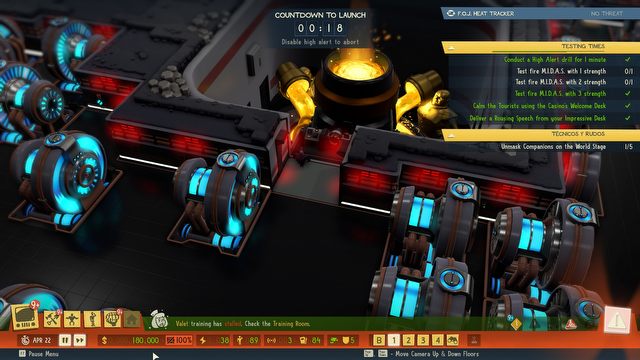 Thankfully, each villain has special abilities that can buff your minions or tasks depending when you use them. Science-driven Zalika, for example, can repair broken equipment or take out fires in an instant while power-hungry Maximilian can instantly force a minion to complete his training. You can also recruit various henchmen who bring their own set of skills to the table, further allowing you to customize your defenses. These extra abilities are helpful in different scenarios and offer you new ways to manage your lair or deal with your enemies.

In addition to its campaign, sandbox mode provides even more freedom and lets you play the game with no restrictions while automatically unlocking different minion classes and mission-specific items. You can simply work on making the craziest or most efficient lair possible while still fending off infiltrators any way you want. But just like in the main game, if your villain dies, you lose.

From the moment you start playing, Evil Genius 2: World Domination gives you plenty of options to customize it to your liking. While the first few hours of each playthrough are repetitive, its extensive campaign, charming characters, and addicting dungeon management system make up for it and offer you a unique experience every time. Whether you enjoy an occasional spy spoof or simply relish at the thought of managing every aspect of your simulation game, do yourself a favor and check out this delightful title.

According to our users, Evil Genius 2: World Domination for PC was a disappointment - the expectations before the release were higher than the current average user score.