Your name is Henry and you decided to take on a job of a guy who spends the whole summer in the heart of the wilderness in Wyoming and looks for any signs of fire in the forest. It seems that youre going to have a really boring summer; after all, how long can you do nothing but watch the nature? Moreover, theres no one alive in the neighborhood apart from your superior, whom you talk to using your walkie-talkie.

The beginning of the game is very unusual, because it reminds me of text games from long ago. You see a colorful background with descriptions of things that the protagonist sees, and your task is to choose an answer or reaction that suits the situation best. This literary introduction sheds some light on Henrys life hardships before he took the job of the forest ranger, and it explains why our hero is here at this time and place. These subtitles interchange with some interactive scenes on the games engine, and it makes the first impression really positive. You really want to get into a world like this one. 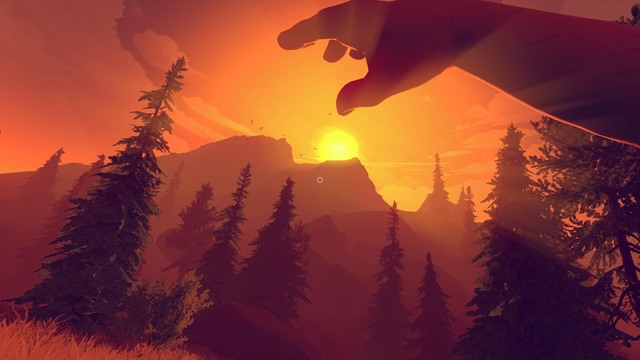 The beginning straight from a postcard.

The actual beginning of the game is almost exactly what you saw on the prerelease promo videos. Henry, a freshly hired forest ranger, is designated by his superior, Delilah, to take care of the problem of fireworks that someone lights in the heart of the protected area. The task is rather standard, but it feels unique thanks to a really charming surroundings and great conversations between the protagonist and his superior. There is a number of standard tasks like this one in the game: go there, watch out for this and that, check something, report on something else, etc. However, everyone actually expects a mystery, some kind of ambiguities, something more than whats on the outside I dont intend to spoil the game for you, so let me sum it up like this: Firewatch has a secret, and the atmosphere of the game is skillfully crafted to be more and more dense in time. All of this leads to a quite satisfying and well-explained finale, while at the same time being really mature and melancholic. The core of some plot threads perfectly contrasts with what you can see on the screen. Hats off for the gentlemen (and the lady) from Campo Santo  you did a great job.

If you set the whole mystery aside for a second, there are only two characters in Firewatch. Henry is the player-controlled bearded, quite intelligent man who has a problem and wants to get away from it. In half of the cases we choose what our protagonist will say through his walkie-talkie and basically everything that we hear makes it impossible not to like the character - its really important for the game that focuses on the story so much. Henry is a really credible and complex character that you will always cheer for. Delilah is the nice voice that you hear from your transmitter. A sarcastic, life-experienced woman whose character really matches Henrys. She also feels like a real-life person and listening to her is a real pleasure. Characters created for Firewatch and the situation they must face could really work as a book or a movie as well, and thats what makes it so good. 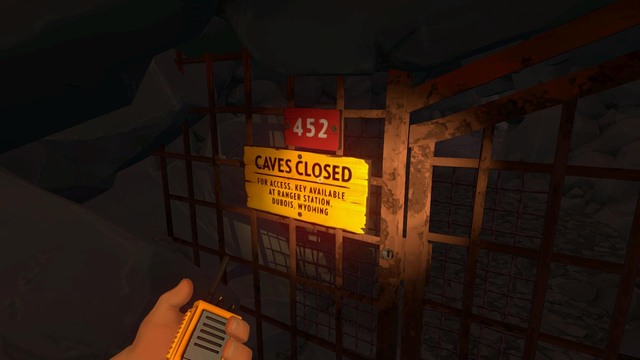 This closed cave is really tempting. Dont worry, you will find out whats inside.

A lot was said about the visual side of the game long before it was released, and for a good reason. Firewatch looks absolutely stunning, and the really characteristic, comic-like artstyle will make it possible to play the game in a few years and not notice how old the game is. The game utilizes Unity engine, and thats why it is possible to play the game in steady 30 FPS even on older graphics cards. You wont see super-detailed textures or high-end visual tricks; Firewatch seduces with its lighting and color temperature. As the story goes on, daytime changes as well, and sometimes the sun hides behind the horizon without you noticing (Henry-the-player was so focused on completing tasks that he didnt really notice that it already got dark  a brilliant effect, even if things like that are scripted). By the end of the game, there are things happening that will leave you in complete amazement. 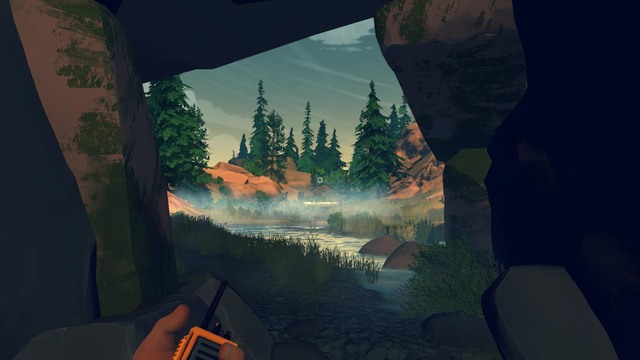 The morning mist in Wyoming.

Olly Moss is the person behind the unique artstyle of Firewatch. Hes a British visual artist and illustrator, his works were  up until now - connected with the film industry and they were published in the Empire magazine. Film companies started to pay attention to him once his posters of various movies went viral all over the internet. His unique way of drawing works perfectly in a video game  you should definitely check out his work here.

The audio in the game is equally important. What catches the ear in the first place is the brilliant way Henry and Delilah were created by the voice-actors. This is a really top-notch work that might as well work as an audiobook. Firewatch also has a really frugal soundtrack  music only appears in certain points that are important to the story and it gently emphasizes the specificity of events. All the other factors that contribute to the atmosphere of the game  the rustle of trees, crack of branches, splash of water  really completes the feeling that the game is really well-thought-out in terms of both audio and visuals. 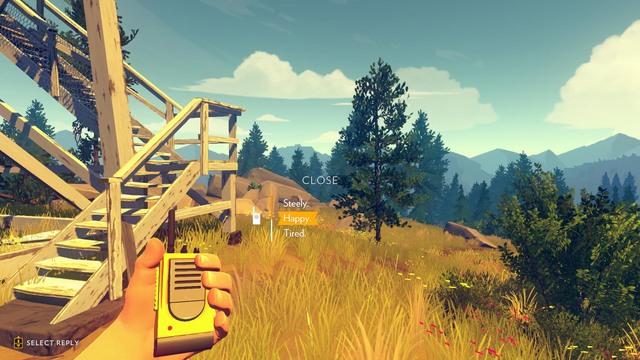 Henry is describing his beautiful eyes.

Lets take a look at the core of the game. How do you play this and what is it exactly? The basic idea behind Firewatch is that its a walking simulator, meaning an exploration game in which walking to certain locations takes the most of your time. On the way you will find various items that might come in handy later. A flashlight, an axe, or a camera However, you cant call this a typical adventure game, because using all the items is strictly connected to certain locations and all you have to do is press a button. There is no place for mistakes here. The only freedom you have is related to your walkie-talkie and the abovementioned choosing your responses, but in the end the whole conversation goes exactly as the creators have planned.

The world in the game is half-open. There is an area of over a dozen square kilometers at your disposal, but it is quite restricted. Henry can only walk on existing paths, sometimes you can see some narrow spaces, but there isnt much sightseeing here. 80% of locations available on the map are related to the plot and you need to visit them in a certain order. Few places expand the world a little bit, but its nothing more than just an excuse for another conversation between the two characters. If youre not supposed to go somewhere, you just wont. 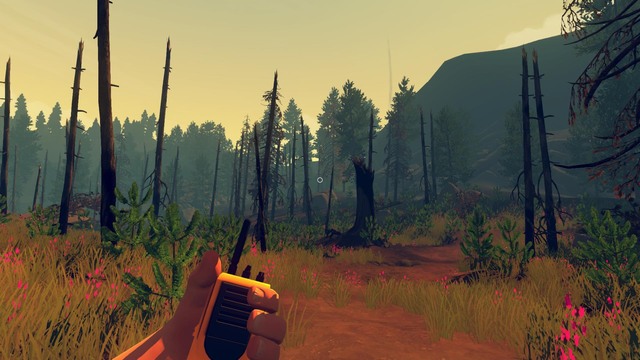 This leads to yet another conclusion - Firewatch is a 100% linear production. You can look into many small places within the forest, watch various items (you can pick up lots of things and watch them carefully, there are also lots of notes and texts that Henry can gather and read at any given moment), but your another step is always to get to a place that Delilah shows you and do the only thing that you can at that location. Some of you might have expected more freedom, but considering how the story is crafter, Firewatch couldnt have been a fully open-world game. In other words, I cant really consider this to be a drawback of the game; however, its hard to come into terms with how long it takes to finish the game. According to the timer on Steam, completing Firewatch took me about 5 hours. I didnt really hurry or sprint through the game (Henry can run, but his pace isnt really impressive), I peeked into a lot of places and I searched all locations for important elements. I expected more from the game, but Im sure that some players can definitely squeeze even moreout of this without playing for over 6 hours, though. Basically, theres nothing more to do in the game apart from admiring the view.

The creators are really clever. Before the release of their project, they kept a lot of things in secret. They didnt promise anything, they didnt say a lot about the content, features or possibilities. They showed pictures, trailers, they spoke generally of what the game was, and the rest was the gamers hopes. Firewatch is too short, it has some technical problems (for example, if you want to grab a rope or climb a tree, you often need to stand in a certain spot, otherwise the game will not show you the interaction button; also, some items that Henry held in his hand disappeared), and it might disappoint some people. 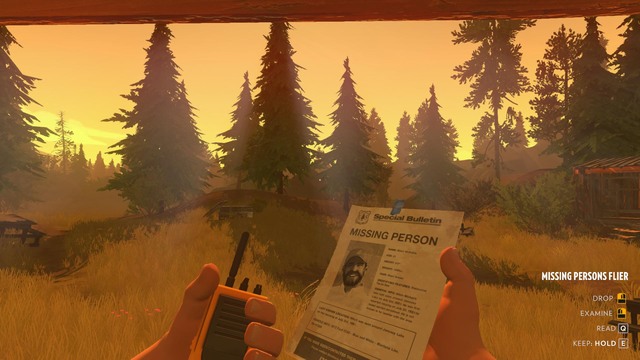 You might get lost in Firewatch, but not for too long

Luckily we also get beautiful graphics, amazing character creation, very original location of the game and really interesting and well-developed plot  these are definitely the most important advantages. There is a lot of games about walking out there  Dear Esther, Gone Home, Everybodys gone to the Rapture or The Vanishing of Ethan Carter. However, if you still want more and you fell for the game after seeing the prerelease materials, you should definitely try Firewatch  you should be as happy with it as I was. Those who arent really keen on productions like this one, I encourage to try it as well  Campo Santo managed to great something extraordinary and its worth spending two evening on that. 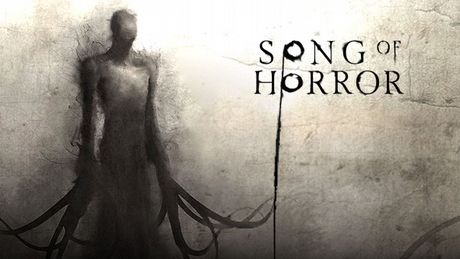 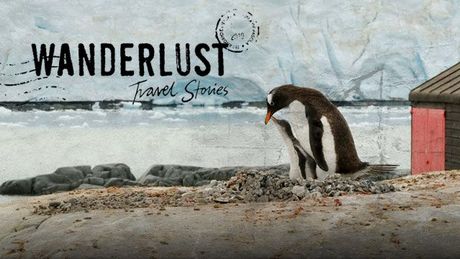 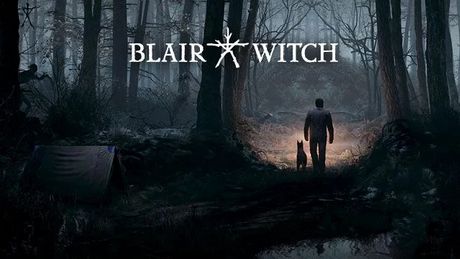 According to our users, Firewatch for PC was a disappointment - the expectations before the release were higher than the current average user score.