All the dystopia conceived as a warning will inevitably fail to deliver. As long as it's art, we won't take the message very seriously. It's a bit like that with Liberated – all the means of oppression shown in the game are already used today, and yet I'm still hesitant to pull the chord out the wall socket and storm Area 51.

Although, upon reflection, the problem may not lie in the convention, but rahter in who's reading it. Liberated shows us a conflict between two groups – anarchists and the government – but it also allows for a vestigial voice of regular people. But the freedom fighters make a big mistake: they need a witness, and they chose someone, who really doesn't want to be a witness. Critical attitude and political maturity of bystanders, gray people and statistical residents is limited to the simple dichotomy of the system of likes on social media.

The loss of civic identity began around the time when the morning press review was surpassed by unreflecting scroll of the Facebook timeline. As a society, we already aspire to the role of Matrix batteries. Liberated seem to be saying: this damp fuse and soggy powder won't be lit. The future is already determined. But let's start from the beginning.

Liberated is a Polish indie game developed by Atomic Wolf and published by Walkabout Games, a bold publisher of Wanderlust fame – that game was a strange title that combined visual novel with a paragraph game, and which we've reviewed here. Apparently, the publisher makes a point of reaching for difficult and ambiguous games, as this time, we get a virtual, animated comic book.

Look at the pictures – what exactly is Liberated? It is a bleeding-edge narrative platform game that pushes the convention. Remember cut-scenes from the first Max Paye? Here, they are interactive and intertwined with platform sequences. The entire game is on depicted as pages of a comic book.

Is a comic book or a game? 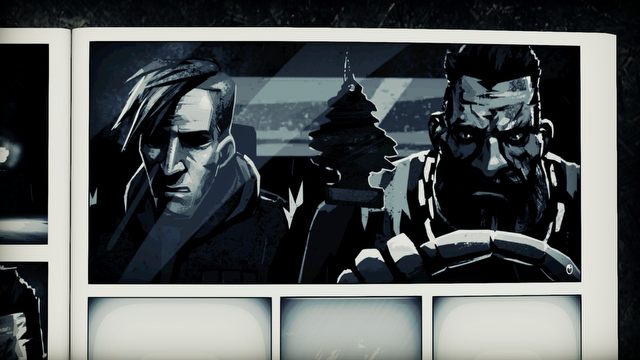 The form isn't minimalist at all!

You can't talk about the graphics of Liberated without referencing other disciplines of art. The drawings in the game are jaw-dropping. It's all black-and-white, comfortably sitting in noir atmosphere, and the animated shadows and lights bring plenty of life to make it interactive. Individual scenes – though composed of images-are not static, since the characters remain in limited motion. An entire dialogue can happen within a single frame. An entire story can be told in a few pictures. 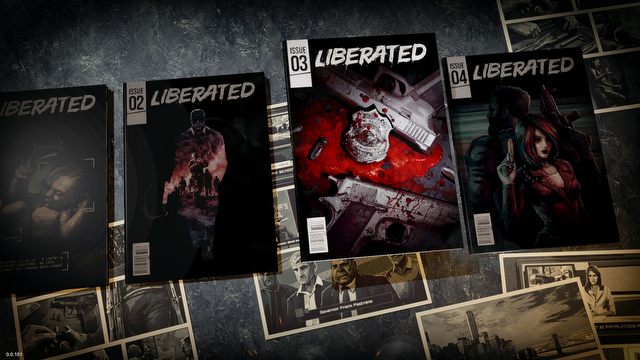 The plot is divided into four parts – or, more appropriately, four albums. Of course, we're not just going to read the comic – some frames are long platform sequences, in which we play as one of the characters. Each level has more or less, the same rule: get through a level filled with opponents, solve a few environmental puzzles (move the box, unlock the way forward) and possibly complete a mini-game.

What also sets the game apart is the plot. Liberated tells the story of several heroes on the opposing sides of the barricade: over-protective state that fights terrorism at the expense of freedom, and a group of activists probably inspired by the Anonymous. 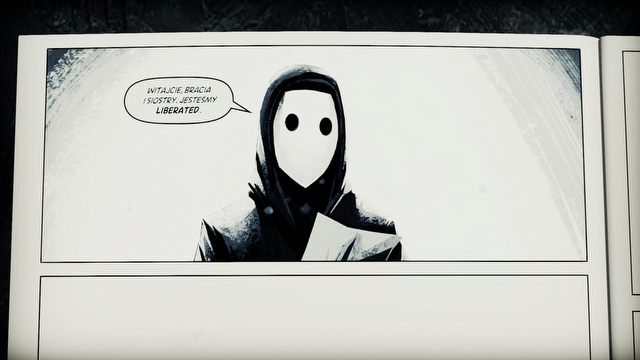 What both groups have in common is that they both seem to believe that the end seems to justify the means. And though we begin the adventure in Liberated as a rookie recruit of freedom fighters, we quickly learn that we are not the good ones at all. Another revelation follows soon thereafter, and it's that: there are no good ones. Liberated is not a tale of a a tireless, noble resistance fighting to free an oppressed democracy from the clasp of totalitarian regime. This is more of an attempt to portray a stalemate between order and freedom. Both sides are right and wrong at the same time. The ill-conceived assumption made by the government is as old as civilization itself – the end justifies the means (and obscures morality). The mistake of the resistance is that they want to organize the lives of people, who don't give a damn about their cause. The general public, according to Liberated, are unsound and apathetic. Raised in the social media, with access to super high-bandwidth optic fibers, they accept the rules set out by the totalitarian state. Why? 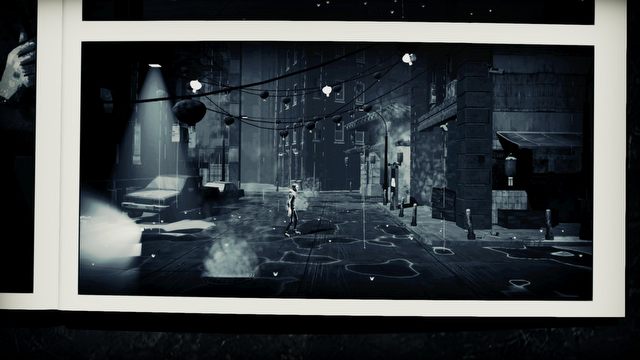 Platform stages aren't as pretty as the comic-book levels, but they manage to hold their own.

The focal point of the game's plot is an armed assault on a school. I won't be giving away plot details so you can discover the secrets yourself, but I can tell you that the creators of Liberated try to show us in the game that fear-mongering is a real problem, and a brand new economy susceptible to exploits. Skillfully manipulating fear can let you to push through even our most radical bills and laws. In Liberated, personal freedom was lost exactly in this way. The thing is that the cell fighting to reclaim that freedom is claiming the interest of the general public, which – as you already know – doesn't give a damn. And that is perhaps the strongest message of Liberated. That, at the end of the day, our greatest enemy is the ignorance and lethargy of the mainstream. 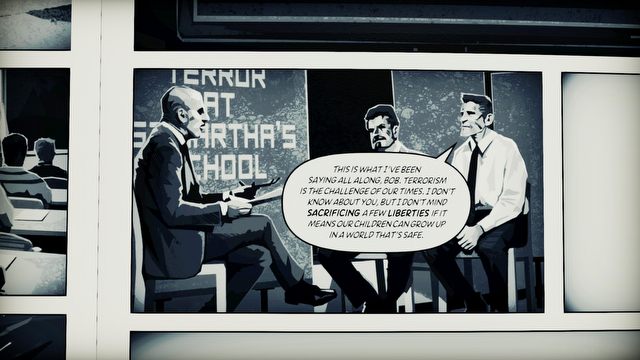 Don't worry, the bubbles are perfectly legible – it's just that it's hard to snap a picture of a dynamic scene.

As you wander through rooftops, warehouses and abandoned military complexes, you will repeatedly ask yourself questions about the legitimacy of the heroes' actions and decisions. The occasional freedom of choice in Liberated is also laudable. They do not generate sweeping consequences, but they underline the fact that this is not merely an interactive comic book.

I deliberately omit the specifics regarding characters and themes, and focus on interpretation, because the story of Liberated is an adventure for a longer while and I wouldn't want to spoil it for you. You can complete the game in six hours, so if you don't like long productions, you'll appreciate this gem. Short and coherent stories are always in demand and, frankly, I don't see any reason why Liberated should be 10 or 15 hours long. All the more so because we spend a good chunk of the game on platform stages, which quickly become nuisance rather than diversion. 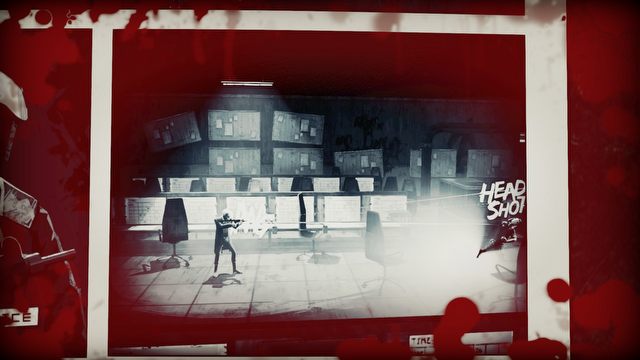 Combat is, unfortunately, not the game's strong suit. 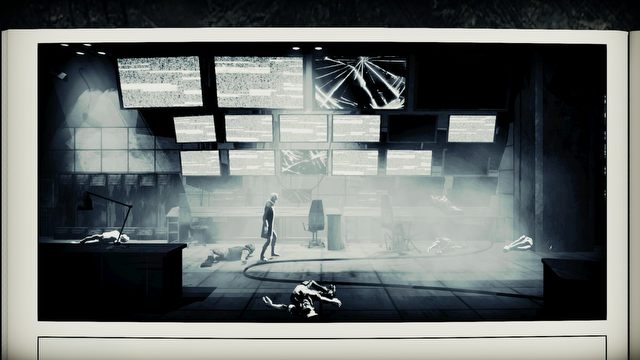 Gameplay evocative of Limbo is, in case of Liberated, based more on dexterity and reflexes than puzzles. We simply move the character around the stages, leap across rooftops and take cover around corners to ambush innocent cops. There sporadic logical puzzles in form of a hacking mini-game – you'll be figuring out where to move the crate much more often.

These stages, however, clearly lack a fleshed-out concept and diversity: most of the time, we just jump from platform to platform, trying to take down enemies. It's a bit of a shame and a whole lot of untapped potential – don't get me wrong, the backgrounds are nice and moody, but the problem is that in terms of gameplay, it's just a plain platformer. Jump in here, hide in there, swim for a while, run the elevator, break the opponent's neck, pull the trigger before the enemy. That's basically it.

The developers tried to diversify them with QTE sequences, but platformer sequences could definitely be more interesting. Seriously, I recommend setting the difficulty level to the easiest "reader" – this way, you won't have to constantly repeat stages with more enemies, letting yourself completely focus on the story. The story that, while not revolutionary, is certainly asking tough questions about processes already underway in our society.

For our freedom and yours 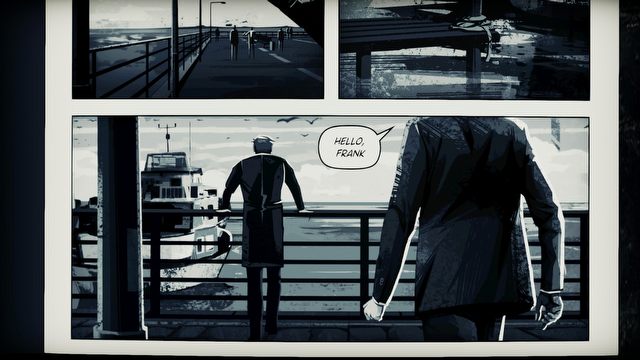 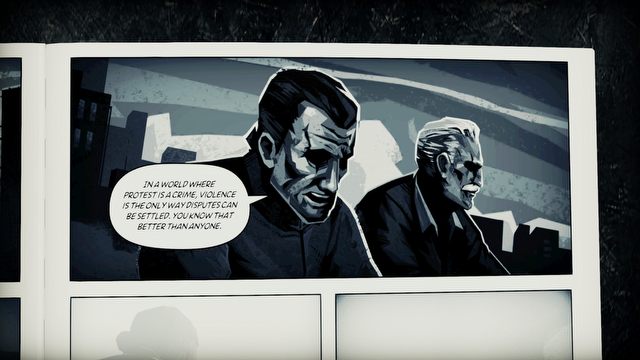 It is the job of any dystopia to criticize our own world. Unfortunately, the message of Liberated is terrifying.

The fantastic, artsy graphics are complemented by good, fitting soundtrack. Liberated is a bit of an experiment. We already know that it actually works in artistic terms – Liberated is great to watch and hear, also on Switch. I had the pleasure of visiting the developers in 2019 – in better, healthier times – and met some really inspiring, truly gifted people. If Walkabout Games indeed is going to support ambitious developers like them, they deserve massive support. A standing ovation!

By the end of the game, you may feel really sad. Liberated is relentless in this matter – the four comic albums are an examination of the society. It operates with stunning shots and drawings. But drawing the conclusions is on you. Remember: the fight that's going on every day is about each of us. The question Liberated ultimately asks is "Do you even care about your own privacy?"

WHAT”S THE DEAL WITH THAT PHRASE?

“For our freedom and yours” was an unofficial motto of the Polish troops and diaspora fighting in various wars of the 19th and 20th centuries, when the country was non-existent, and Poles around the world participated in all kinds of independence movements.