Dark, gritty, with the familiar hues of cyberpunk everywhere you go, Gamedec is an isometric RPG where you play a detective who solves mysteries in the virtual world. The game is based on the novels by Polish sci-fi author Marcin Sergiusz Przybylek of the same name and features themes that you would expect from a post-apocalyptic world where people dive into games to escape their not-so glamorous reality.

A bit like Disco Elysium, Gamedec is a cerebral game that tests your deduction skills. While slow and questionable at times, it rewards you with a branching narrative that never fails to bring you into its puzzling, and sometimes complex world of ideas, philosophies, and intrigue. 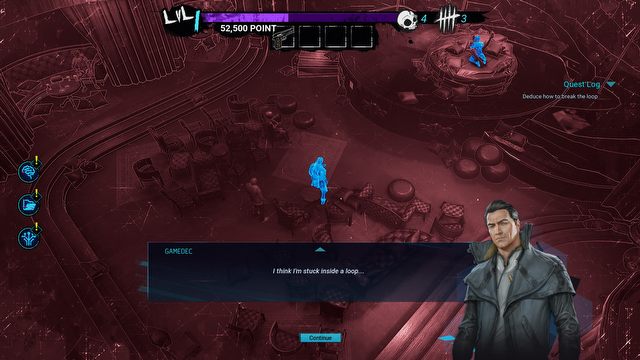 As a game detective, i.e. gamedec, your character’s job is to enter virtual worlds and solve various cases to help their clients. This involves talking to the various NPCs in the current case’s “virtualium” to gather information and to come up with a deduction that moves the story forward. Your deductions can be right or wrong, and these decisions can shape how the overall case plays out.

Making deductions becomes easier as you gather more intel from those around you, so the game encourages you to talk to everyone and see how these conversations play out. However, you don’t need to actually talk to that many people if you think you have a deduction, even a flimsy one, as the game doesn’t punish you for making a mistake – it “just” generates another series of events based on that choice. 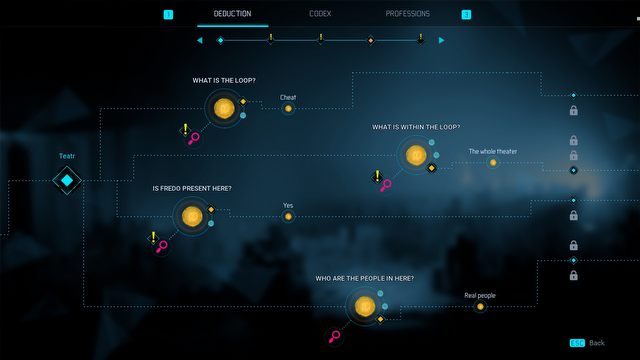 Also, you won’t be able to gather every piece of evidence every time because some of these are locked behind conversations you can only engage in based on your professional talents. You start the game by deciding your character’s appearance, past job and place of origin, and as you decide how you interact with others, you unlock points for being kind, selfish, empathetic, and so on, which allow you to unlock additional professions.

Choosing the scalpel profession give you knowledge of medical terminology and the human body, for example. Being an infotainer means you are charming, and being a programmer lets you code and hack into certain technology. These and others can influence your investigation allowing you to open up new ways to gather information or making it easy to get to a clue. Now, you won’t know when one of these profession-only dialogues will pop up in your investigations, so each playthrough will be different depending on how you shape your character.

You can also unlock these professions mid-way during a conversation if you have enough aspect points to do so, making them convenient ways to get what you want faster. Even at times when you need to interrogate a character, asking too many wrong questions will simply close out that conversation, forcing you to find another way to progress with your investigation. The game may make you put your thinking cap on to solve some complex cases, but it also knows not everyone is an ace detective. 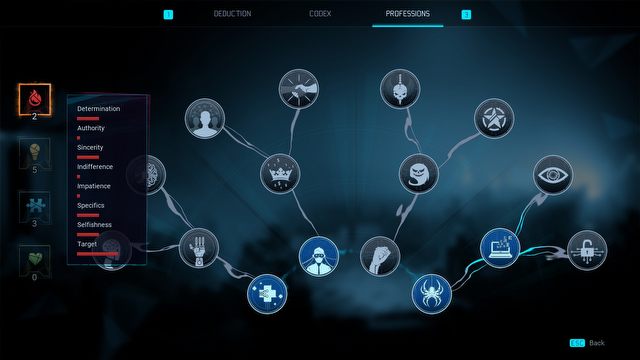 Its branching narratives are one of the most impressive aspects of Gamedec, which is already packed with dialogue that will rival any sci-fi novel out there. There is a lot of reading to get through, yes, but the game remembers your choices even from the very beginning of the game and surprises you with moments in the conversation, where a character brings up something you may have forgotten you did. For instance, because we chose to rummage through a garbage can, a character later on decides not to talk to us because of our smell. Had we talked to her first, we would have gotten a totally different interaction. 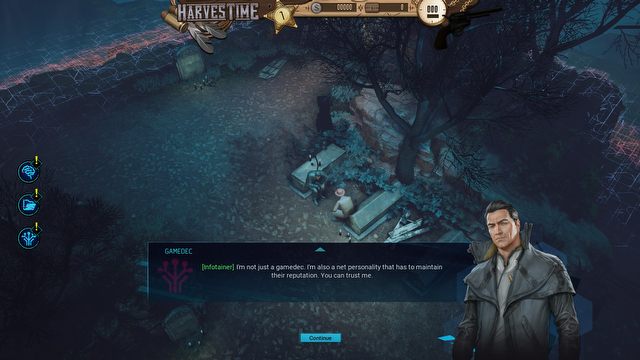 The same applies to areas you can explore. Cases have multiple optional deductions to complete that help you solve the final one in each case, but because these are optional, you can also skip them entirely, depending on your conversation choices. In one area, we decided to check in someone after a murder which ended up getting us shot and then venturing in a bar to find out who shot us. If we had chosen to simply go back home, what we did and whom we met in the bar would cease to exist from our story. Not knowing how the narrative will play out makes the game surprisingly dynamic. 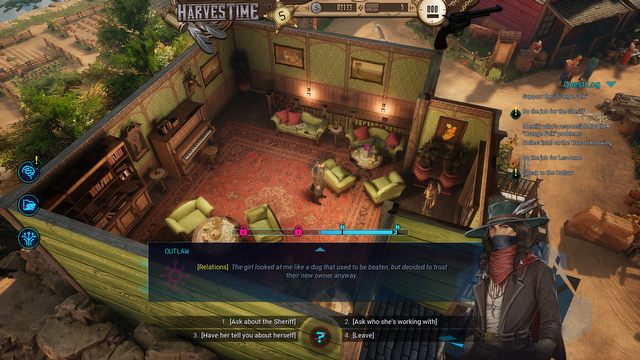 And that is saying a lot because Gamedec can be lacking in action and focuses on substance more. For starters, there is no combat or inventory system here, so you simply need to gather the facts, read the information you are given, and put it to good use.

Its chilling themes regarding child slavery, stimulant dependency, sexual abuse, and, virtual dependency make for a unnerving and intriguing journey into a truly dark, cyberpunk universe.

Its clever writing helps to keep things entertaining at times, but it also causes the game to drag as there is just so much information to rummage through that to fully capture everything can get overwhelming. Not everything is relevant to your case either, so sometimes, you’ll just be talking to an old man about his life and realize it amounts to nothing useful. And because there isn’t any voice-over work aside from the opening cutscene, the game can seem very quiet.

Gamedec’s worlds are fascinating, albeit silent at times, and are made even more absorbing knowing there is a lingering feeling of dread in the air. It touches on some dark subject matter that makes for an interesting read and its branching narrative gives you multiple ways of enjoying the overarching story. Like a sci-fi novel, Gamedec requires your full attention otherwise you may get overwhelmed or bored of it before you turn the final page.

In fact, there is hardly any music or sound effects in the game at all. The soundtrack is very faint and lacks any sort of personality, creating an experience that seems calming, but borders on lifeless at times. You only hear the sound something is making if your character gets up close to it. And because its point-and-click controls are iffy, your character won’t always go exactly where you want them to. 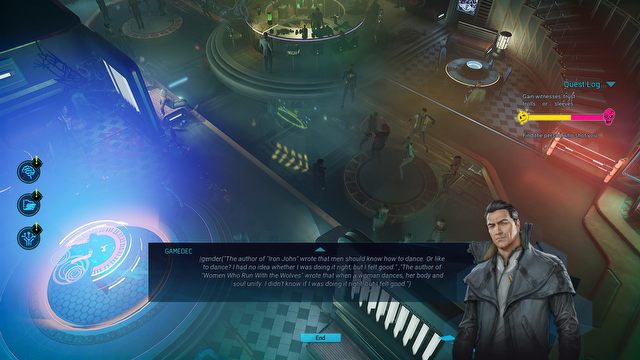 The above sentiment is unfortunate because the game’s universe is packed with unique worlds worth exploring. These virtual worlds are the video games people play to escape their daily lives, so everyone around is a player wearing a unique skin, different from their real-world appearance – except you, of course, because you are a professional. These worlds include a free-to-play farming simulator, an adult’s only game where anything goes, and an RPG with an Asian aesthetic. Each one has a unique color palette and HUD with their own rules and NPCs.

Gamedec’s worlds are fascinating, albeit silent at times, and are made even more absorbing knowing there is a lingering feeling of dread in the air. It touches on some dark subject matter that makes for an interesting read and its branching narrative gives you multiple ways of enjoying the overarching story. Like a sci-fi novel, Gamedec requires your full attention otherwise you may get overwhelmed or bored of it before you turn the final page.

According to our users, Gamedec for PC was a disappointment - the expectations before the release were higher than the current average user score.