The main character of Ghost of Tsushima is Jin Sakai, but I would personally name another star of this show  the titular island of Tsushima. Feudal Japan is one of the most interesting historical settings for a video game  it's amazing that we had to wait so long for a high-budget open-ended world action-adventure game to take advantage of this vibe. It was worth being patient because Tsushima utilizes the potential of the Samurai World really well. 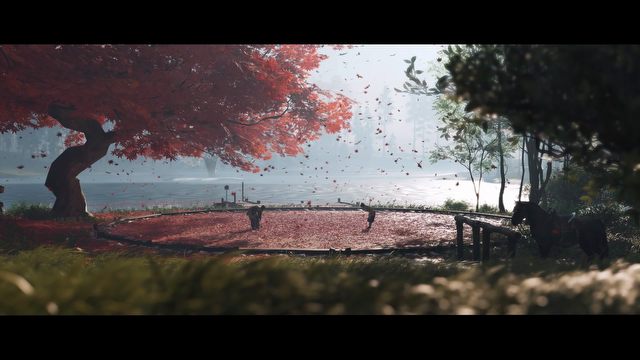 The island is divided into three main parts, which are accessed gradually as the story progresses, and each area represents a different time of year  starting in summer and ending in winter. The surroundings are breathtaking, however, in purely technical terms the game does not match the extremely high bar of graphics quality set by The Last Of Us 2. The colors of this world are bound to impress with some majestic landscapes, at which the finger itself moves to the "Share" button (while playing the game, I made over 400 screenshots, mostly postcards with beautiful landscapes).

When designing the in-game world, instead of faithfully recreating the real Tsushima, the developers set out to make the most attractive representation of Japan at the time. We explore forests of cherry blossoms, charming villages covered with blood-red leaves, dueling circles, fields of white flowers, castles, mountain shrines, sunlit lakes, snow-covered camps, and temples hidden among bamboo forests  if you can think of a view characteristic of the Land of the Rising Sun, you will almost certainly find it in the game. And make sure to stop for a moment to enjoy it, because the last such vividly created world in which I was astonished at the sights with each step I took was featured in Horizon: Zero Dawn. 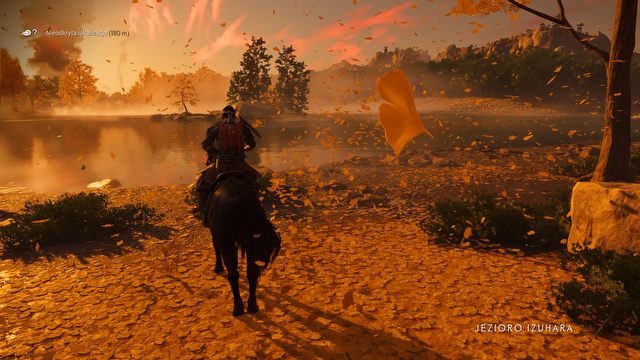 The interiors of buildings are barely furnished and usually have the same props, devoid of any detail that would give the illusion that someone could really live in these places  they look dreadful in comparison to the outstanding landscapes. Also, in many rooms and interior locations you can notice the low resolution of textures. While the overall artistic direction of the game is impressive, the tuning of the finest details pushes Ghost of Tsushima away from the prettiest games.

We can turn on a special graphics filter called Kurosawa mode before the game starts (and at any time from the options menu). When choosing to activate this mode, the screen turns black and white and features distinctive distortion that mimics the effects usually seen when watching old movies. The whole thing makes Ghost of Tsushima actually look like an interactive work directed by Japanese cinema legend Akira Kurosawa. Unfortunately, in this mode, the readability of the environment is severely reduced, so it is a piece of trivia rather than a way to play (unless someone is looking for an additional challenge)  but I would encourage you to turn on this filter for a few moments and take part in a few battles. The effect can nicely build up the atmosphere.

Tsushima is not just an empty mock-up and I like that a lot. By the latter I mean that we dont have to run around from one marker to another between main or side quest. Here it doesn't work that way, mainly because the markers are not available most of the time  they only appear when we are very close to our destination.

So how do we navigate throughout this world? We are guided by the wind. Literally. When we choose the destination from the map, a wind blows around us, the direction of which indicates the destination of our journey. By carefully observing the reactions of leaves and flowers to gusts (which power we can temporarily increase when the natural ones are not visible enough), we are able to determine where to travel. In addition, when we find ourselves near some interesting location, a golden bird may appear which guides us to a particular collectible or a hidden location. 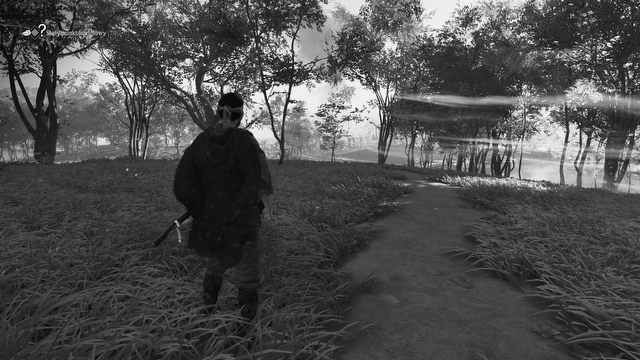 These mechanisms, although not significantly different from traditional markers, thanks to their genuine and unique presentation, differ from the classic indicators and feel much more natural, fitting into the atmosphere of the game and enriching it with a romantic backdrop. They also encourage more careful observation of the surroundings and, as I mentioned, make the island something more than just an typical empty level.

The effect could have been even better, but it seems that Sucker Punch have got a bit spooked at some point and decided to tone it down. So what if a golden bird can lead us to an objective, since our presence near a certain place (not necessarily very close) adds a traditional question mark "to complete" on the map, and the destruction of the enemy camp reveals such question markers located within a range of even few hundred meters.

As a result, exploration is somewhat split in between  on the one hand, we have brilliant ideas about nature pointing us to a destination instead of markers, on the other, we have a map disfigured by traditional question marks. This is all the more disappointing because a better system for exposing them has already been implemented in the game. By rescuing peasants from the hands of enemy soldiers or by talking to the settlers, we can learn from them the location of the mentioned enemy camps or side missions. The locations in question are marked on the map as "places known from rumors," which is much more natural than question marks appearing basically out of nowhere. It was enough to extend this system to all markers and the result would, in my opinion, be much better and more consistent.

Ghost of Tsushima for PS4 turned out a pleasant surprise for our users - the current average score is higher than pre-release user expectations.