Hammerting is a vertical colony-building sim that lets you manage a community of dwarves as they explore, build, and mine through a mountain filled with resources and danger. Its mix of civilization and resource management features provides you with many ways to stay busy, and each procedurally generated map means you get a fresh new canvas to play with each time. Yet while it has all the makings of an engaging sim, a handful of glitches and odd gameplay choices mar its potential. 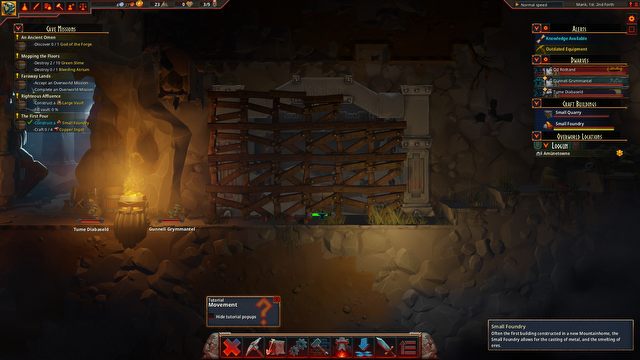 Once you pick out your difficulty and size of your mountain, brief tutorials introduce you to various aspects of gameplay with windows that give you more insight into certain gameplay features. These only work to some degree, but they simply open new pop-up windows with more information. These tips hold important information such as how to manage your dwarves, what are the skill trees, and how important is trading with the outside world. If you don’t read through these, you will have no idea what to do.

You really ought to read through these at first, because there is so much thrown at you right from the beginning. The objective of each game is to grow your dwarven community by expanding your empire, surviving enemy attacks, and amassing a fortune. In order to get there, however, you need to start from the ground-up – literally – and build various areas that net you more resources or tools. These pop-up windows are okay, but a more hands-on tutorial would have made your actions clearer.

The mountain your dwarves reside in may be huge, but you won’t know what it fully looks like until you tell your dwarves to move further in and explore it. Your map is unique with each new game, so this mystery really adds to the intrigue and dynamism of exploration. Sometimes you will find a large chamber filled with resources like iron and copper ore, other times you will run into rat-infested dens, and sometimes you’ll find secret chambers that let you craft unique materials. 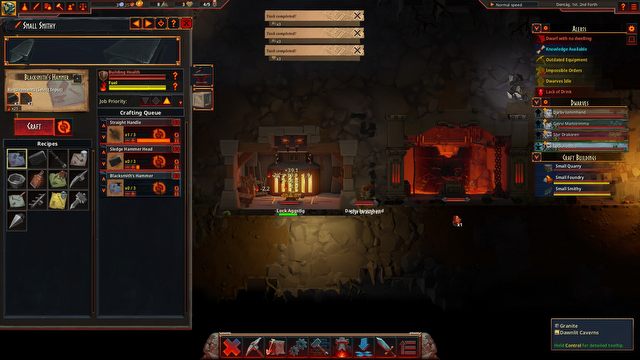 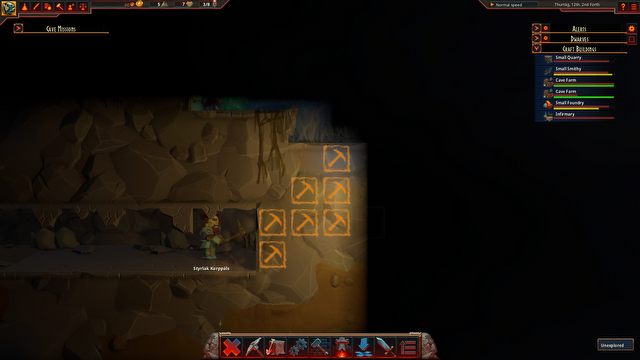 At all times, you have full control of how your mountain dwelling will look like so you can chip away and create your own tunnels, rooms, and staircases and then make room for the special buildings like forges, farms, and vaults that net you additional resources. The more you explore, the more you unlock mountain lore points to progress through a skill tree that further unlocks new buildings, tools, and even weapons for your dwarves to use. Everything flows nicely and you are rewarded experience for nearly anything you do. 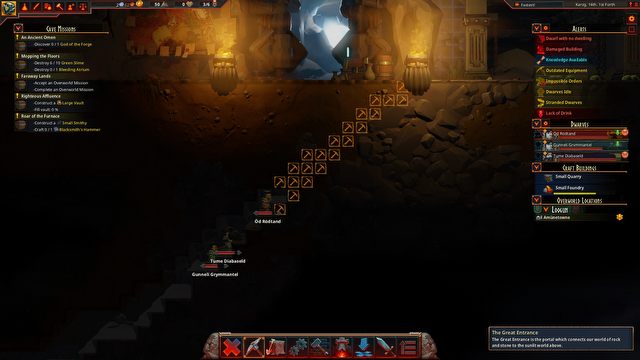 In addition to managing your mountain home, you also need to head to the overworld to trade with neighboring villages and increase your trade lore. Here is where most of the game’s story is told, but there, its narrative isn’t anything that will hook you up. It simply serves as a basis to continue your colony management as these trade lore points can be used to further unlock new skills as well. Plus, the missions you do are boring and mainly require you donated some resources or valuable items. In fact, there isn’t much going on up there that makes it stand out from the dynamic world of inside the mountain. You can even hear your dwarves hard at work when you visit the overworld making this area seem more like a glorified menu than anything else. 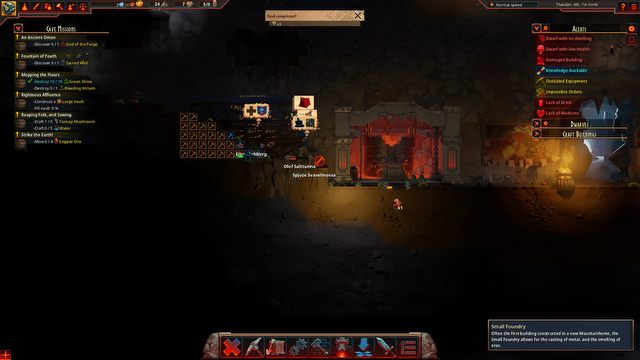 Your dwarves also have unique skills and attributes that make them better at certain things, but unless you physically assign a specific dwarf to something, these skills won’t matter. In fact, most of the time this won’t make a difference anyway and you can just have everyone pitch in somewhere.

Controlling your dwarves is also one of the most frustrating parts of the game as they won’t always do what you tell them to do. For instance, I wanted to make a tunnel and asked our dwarves to mine some section of wall. The one closest to the wall did some digging but then stopped and just stood there aimlessly. The dwarves that came after him had to finish the job for him, but it wasn’t all smooth either as they had hiccups as well. Sure, dwarves have energy and health bars, but theirs were full, so these were obviously glitches that continue to plague the game.

Hammerting has grown a lot since its time on Early Access and recently got some updates prior to its release. Yet while it has all the makings of an engaging sim, a handful of glitches and odd gameplay choices mar its potential. Right now, the game is sure to give you hours of colony-building fun, but it needs more fine-tuning for it to feel truly fulfilling.

I also noticed that dwarves aren’t very smart and really need to be told what to do. When enemies start attacking your buildings, for example, your dwarves will all join to fight them, but even when we told one of them to stay away, he ran in there anyway and ended up dying because he was low on HP. Other times, the dwarves took the long way to get to a destination and would often get stuck in a loop running towards an enemy. Combat is as simple as clicking on an enemy to attack, but these controls just make it so much more of a chore. 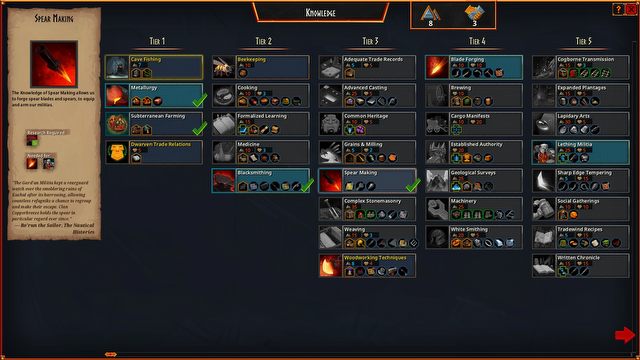 Visually, Hammerting’s art direction draws you in. The eeriness of the mountain and its cavernous chambers give your spelunking a unique atmosphere, and there is a lot of detail to be found in the many chambers you discover. Its unimpressive overworld, on the other hand, is bland and forgettable. Character models also seem lackluster, and their design makes your dwarves look deformed from up-close. Its soundtrack is decent but could have benefitted from more moving music. 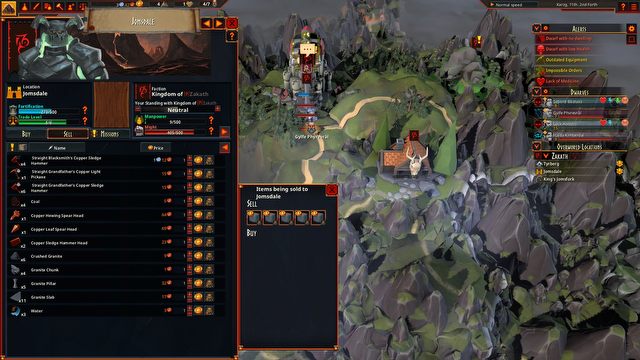 In addition to its AI and control issues, the game is also relatively easy to beat after you realize what you need to do to succeed. Build the appropriate buildings, stock up on the resources you need by turning on the auto-craft feature keeping them always stocked, equip your dwarves with good weapons, and eventually, they will maintain your kingdom without your help. The first few moments of a game feel exciting because it features a new layout to explore, but after you unlock a few skills, make some buildings, and get “settled,” you’ll know what to expect with each game you make.

It’s important to note that Hammerting has grown a lot since its time on Early Access and recently got some updates prior to its release. Knowing how much time the developers are pouring into the game, it’s no surprise if it continues to grow and get better. Right now, the game is sure to give you hours of colony-building fun, but it needs more fine-tuning for it to feel truly fulfilling.