The world of 1920+ is an alternate reality in which European countries are at war using giant, diesel mechs. The main parties of the conflict are Saxony, Russviet and Polania, of course based on Germany, Russia and Poland, respectively. This simple premise alone makes me think of a few, very different games. Having obtained the rights to the franchise, KING Art decided to create an RTS in the style of Company of Heroes, a game that caused quite a commotion at one time. The decision was good, but that's not enough to ensure success. 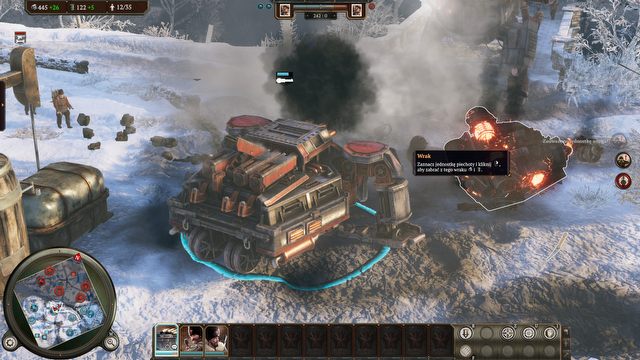 Animations of mechs are pretty good.

The campaign of Polan comrades

The gameplay in Iron Harvest definitely evokes a sense of déja vu. I mean, we've suspected that for a long time, since the original gameplays. This game is strongly derivative; same as in the RTS classic from Relic, we have infantry, vehicles, and different fortifications. Our job is to secure strategic points on the map (like in World in Conflict), which brings victory points and resources needed to obtain more units. In order to win, we must either collect a certain amount of points or destroy the enemy's headquarters. If you've ever played any RTS, you know what it's all about.

The gameplay resembles Company of Heroes at every turn. You can see it perfectly when we tell the troops to hide behind the cover and throw a grenade; order wounded soldiers to retreat to the base; when mechs break through walls and buildings like tanks; or when we deploy sandbags and barbed wire by the bridgehead.

But's it's also very clear that the game is just – sorry to say it – cheaper. I really missed a system of upgrades of units, ability to blow up bridges, leader skills, fortifying strategic points, etc. The fact that all the factions feel essentially the same also doesn't help. They're not identical. Russviet is more offensive, Saxony is better at defending, and Polania feels like somewhere in-between. Still, the old and venerable Starcraft provided us with more faction diversity – two decades ago. Each side of the conflict has the same set infantry units and support weapons (cannons, mortars, MGs). The mechs are a little more interesting, but, in principle, each faction plays the same way. The hero/leader units don't do much to help it. Each has unique skills, but they do not have the same importance for gameplay as, for example, the heroes of Warcraft III.

You can still enjoy it, but since the devs decided to imitate the classic, there's no escaping such comparisons. And, unfortunately, for this new strategy, Company of Heroes definitely wins when it comes to depth of gameplay. 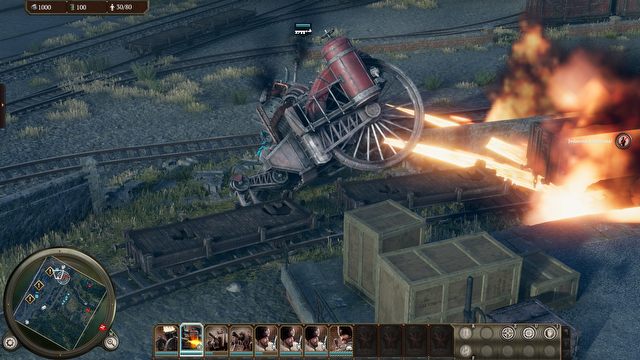 The units sometimes act weird when they encounter obstacles. 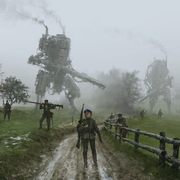 Jakub Rozalski is a Polish graphic artist. I first saw his work in 2014 on kotaku.com and since I was working for a large news outlet myself, I contacted him, and we produced what turned out a very popular interview. I did the right thing, because moments later, thanks to Kotaku, his work was everywhere. Since then, the 1920+ series has spawned a board game titled Scythe (also available in digital), a collection of stories, puzzles, and now its own, full-fledged computer game. If anything, this proves that sheer ideas, encapsulated, as in this case, in high-quality artwork, is enough to do some real, pop-culture damage.

The defining feature of Rozalski's vision is combining simple, rural landscapes and sceneries with huge, dieselpunk mechs. It comes as no surprise, then, that these machines are also the centerpiece of Iron Harvest. Infantry is useful, they are the only ones who can capture strategic points, but it's these machines that win the game for us.

Their looks are very appealing – the cold elegance of the mechs of Saxony, the powerful but clumsy Russviet giants and... well, rather bland mechs of Polania. They're pretty, but it's hard to find a distinguishing feature of these.

The animations are really good, on the other hand, and watching the mechs fall apart, fire at each other, lose parts and crumble is definitely a thrill. They all have some interesting quirks and features; they reload their oversized weapons, spit out shells, and the Saxon Stiefmutter, for example, can release explosive hoops that roll towards enemies. Some designs are really impressive. Especially since the setting, though not masterful, maintains a very satisfying level. The destruction of the environment is also good. Not all objects can be destroyed, but walking through a building and watching it fall apart is a lot of fun.

However, the scale shown by some of Jakub's artworks is definitely missing. I understand that a Company of Heroes-type game isn't ideal for portraying huge machines, but then I also imagine today's technology is more than capable of that. 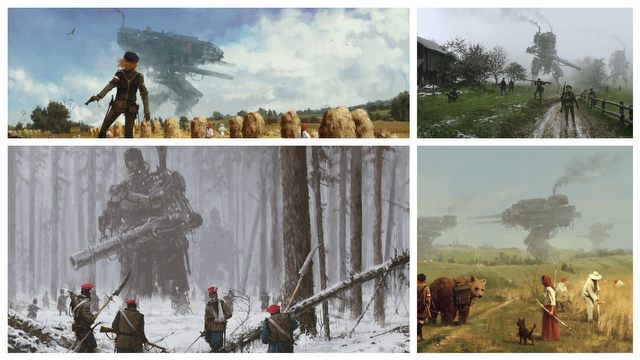 Mechs in Iron Harvest can be quite large, but it's not the scale known from Jakub's original concept arts.

The small scale of maps, typical of classic RTS games, generates some ridiculous situations. For example, a giant cannon, carried by a giant mech, has a range of 150 meters or less. That's not something you can't turn a blind eye on, but it's not very impressive if you do think about it. By the way, the artificial intelligence sometimes acts ridiculous as well. One funny situation I observed was two infantry units taking cover on the same side of the same wall, firing at each other from a few feet away, and at the same time taking little damage, for they both had defense bonus provided by taking cover.

By the way, I can't understand why the camera can't be moved further away, so that we could see a little bit more of the map. Again, it seems like something easily attainable in this day and age.

It is clear that the creators had an ambition to create a slightly more tactical RTS. The campaign teaches you to hide behind covers and keep opponents away from open flanks. The descriptions of units suggest they're based on rock-paper-scissors principle.

In practice, however, I usually ended up using the oldest tactics in the world, known to me personally since Warcraft II, which was my first RTS. In order to avoid confusion, I shall list the critical points of this approach:

Does it work? It usually does. I assume it's gonna be more difficult with living opponents, but it's enough for the AI. The game unfortunately lacks depth. Not once did I encounter a situation where my unit proved ineffective against a particular opponent, as it was the case in Company of Heroes, where machine guns couldn't do much damage to tanks. Instead, concentrating fire on a single mech/unit always did the job. 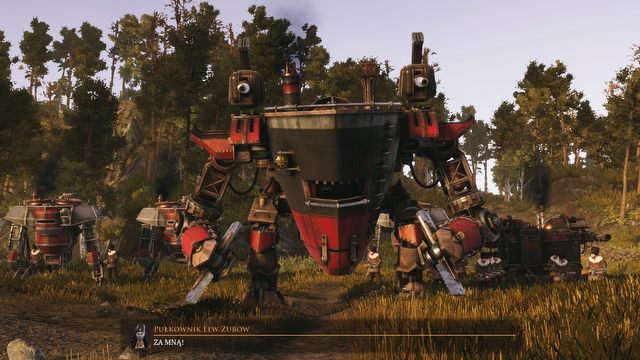 The narration is mostly quite bland. 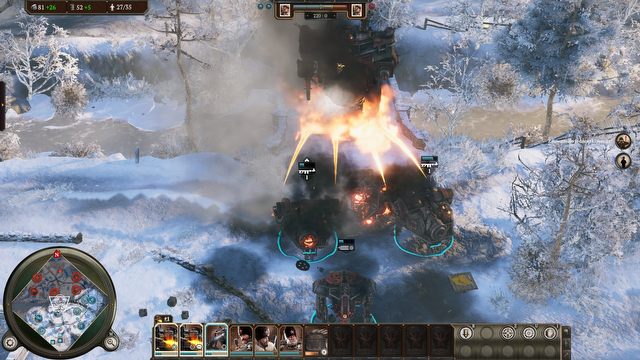 Concentrated fire is usually enough of a strategy.

In the game, we find the so-called skirmishes, as well as challenges in which we must, for example, defend a base from waves of enemies. There's just a few maps here and I very much hope that more will come with updates.

And now, depending on what you like, the main course of the game can be either story campaigns (one for each faction) or online matches. Since I was testing Iron Harvest before the release, I wasn't able to test the latter. So let's talk about the campaigns.

As a set of interesting challenges, they work really well. Subsequent missions are varied, they experiment with the formula, and generally have more to offer than skirmishes. It's still a Company of Heroes, but at least you can see some original ideas. The campaigns also suffice for many hours. The longest is the one from Polania, but Saxony and Russviet also have plenty to offer.

In terms of writing... well, the story and characters are rather mediocre, and it's hard to be very enthusiastic about it. Especially since the dialogues turn out to rather dull and pompous, and the characters and plot are based on clichés. . In general, however, campaigns are worth playing for, especially if you're into RTS games. 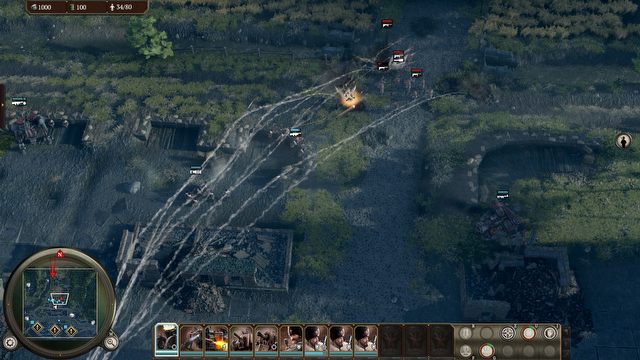 All the factions feel essentially the same.

Enter Iron Harvest, in all white

In the days of yore, when RTS games were released by the dozens (it really was a long time ago, I know), we probably wouldn't have paid much attention to this game. Now, despite being rather unoriginal, Iron Harvest can actually grow to be considered one of the best strategies of recent years.

The game is good, rather than excellent, and I don't think it showed me anything I haven't already seen. Too bad that the decision to return to an almost forgotten genre wasn't backed by some fresh ideas. The only novelty here is an interesting setting, but even that doesn't take full advantage of the potential of the original concept. On the other hand, it's a well-crafted game that can be enjoyed, even in spite of its shortcomings.

I grew up with Warcraft II and III, StarCraft, Age of Empires and Total Annihilation (especially Kingdoms). When Dawn of War was released, followed by Company of Heroes, I knew the golden era of RTS was beginning. Meanwhile, it was its swan song.

I spent about 20 hours with Iron Harvest. I confess that I didn't complete all the story campaigns. If you like the gameplay itself, Iron Harvest has plenty to unpack.

According to our users, Iron Harvest for PC was a disappointment - the expectations before the release were higher than the current average user score.