If you are a fighting game franchise that has been around for decades spanning various systems and generations, you should know what works for you by now. King of Fighters, first introduced to the world back in 1994, knows the kind of game it is and wants to be. Sure, entries since then have introduced new characters, mechanics, and some snazzy tunes, but its three-on-three core experience remains strong after all this time.

King of Fighters 15 is no exception and offers all of that but features some of the series’ best fighters and some tweaks that hope to make the series more accessible to newcomers. Don’t get the wrong idea, though, as this game still has a steep learning curve and doesn’t offer much in the way of single-player offerings. If you have the time to dedicate to learning all the intricacies, combos, and techniques each character brings to your team, KOF XV will be worth it. 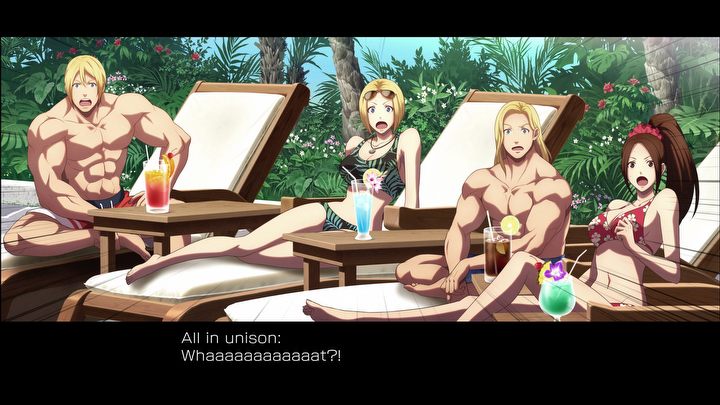 Like any old arcade classic, KOF XV is a fighting game that is built for multiplayer action so its single-player modes are barebones at best. Little has been done to augment its story mode which still feels silly having after fighting games like Guilty Gear Strive chopped altogether and replaced with an intriguing short film. This mode is nothing more than just a series of fights against other AI-controlled teams leading to the final boss at the end, which, in true KOF fashion, doesn’t go down until you defeat in multiple phases.

And while certain characters have unique conversations that will occasionally trigger at the start of a match, story mode just feels like you are just going through the motions of using each of the game’s teams to make it to the end to see their special ending. And once you get to that ending, you will realize it’s just a few still cutscenes with text to read and bits of questionable humor that lack any real substance. It’s disappointing to say the least and one of the game’s weakest features. 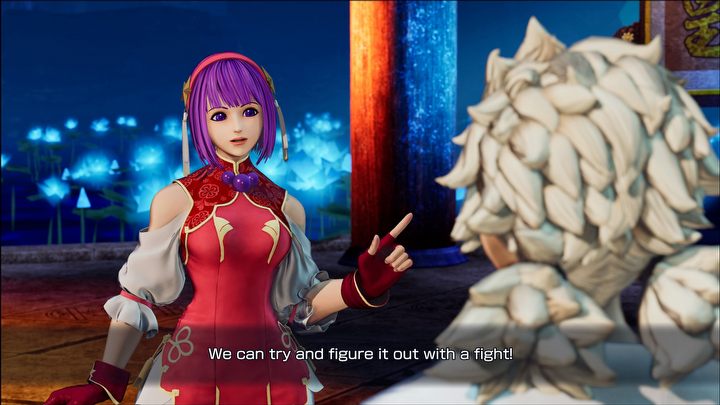 Your efforts are not all in vain, though, as the game gives you a few of reasons to complete story mode as you can unlock entire soundtracks, sounds, and movie clips. Featuring one of the biggest collections of KOF music in any game to date, its DJ Station lets you select which classic tracks you want to play in each stage. Even Fatal Fury and Metal Slug tunes are included making for a nostalgic treat for any SNK fan. 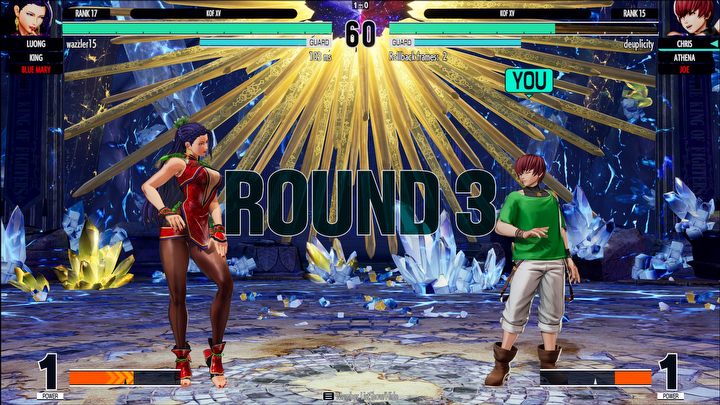 The roster of 39 characters will also feel familiar to some as many series staples like Joe, Terry, and Athena make their return as well as characters we haven’t seen for some time like Chizuru, Chris, and Yashiro. Three new characters — Dolores, Isla, and Krohnen — join the cast and offer some fresh movesets and unique playstyles.

Considering how many characters the series has introduced over the years, 39 may seem like a small number, but the fighters included a great display of KOF variety and offer something for everybody. You have plenty of zoners, grapplers, and rushdown characters to choose from, and because this is a three-on-three game you will want to pick characters that have good synergy together. Of course, your favorite may not have made the cut, but DLC packs — whether you like them or not — promise us more characters soon. 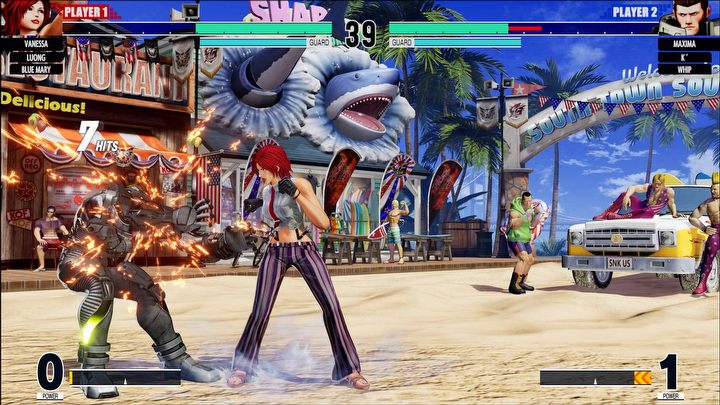 Visually, the game looks better than KOF XIV and is as close as it will come to replicating its classic pixelated models while sticking to its new 2.5D aesthetic. Characters look like they belong on the stages you fight and feature better textures, improved color, and animations that are reworked from XIV or from past games. Stages also look more beautiful, offer a range of lighting effects to add life to your matches. Even certain moves just look flashier and more dynamic overall. 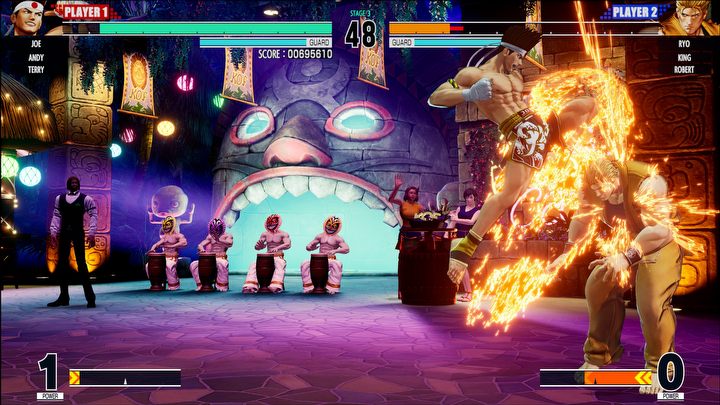 Perhaps one of the reasons why KOF is so complex is that its characters have long move lists that usually involve pulling off a move to then lead into a different one meaning your combos will often rely on planning your moves before just inputting the command you want. Challenge mode lets you practice these combos and its tutorial lets you learn the basics of the game, but aside from this, you are on your own when figuring out how to successfully use a character until you pick them, learn them, and master their moves.

Not to mention, KOF will require you to do this for each fighter you pick for your team so it adds to this complexity. Add to this a bevy of quarter circle and half-circle commands, and you will have your work cut out for you when learning a character. It’s a tough, but rewarding system as you have plenty of amazing fighters to choose from.

A noticeable upgrade from its predecessor, King of Fighters 15 provides another classic SNK experience with some added changes that make the game feel new without making it feel drastically different. It’s a safe move, sure, but it preserves what makes the game such a classic arcade experience and still manages to provide newcomers something to help them ease into the technicality the series is known for.

Those familiar with KOF 15’s battle system will feel right at home as the game feels similar but does offer some additions to diversify how to approach enemies and link attacks. Shatter Strike, for example, is like the Focus Attack in Street Fighter 4 and allows you to absorb a hit and start a combo if you know what moves to link. It’s a rewarding new way to get the edge on an opponent and requires less power meter than a Quick Max combo but scales down the damage you do a lot more. Of course, you will need to figure out when the best time is to use one and determine the pros and cons on the fly, further adding another layer of strategy and technicality to your matches. 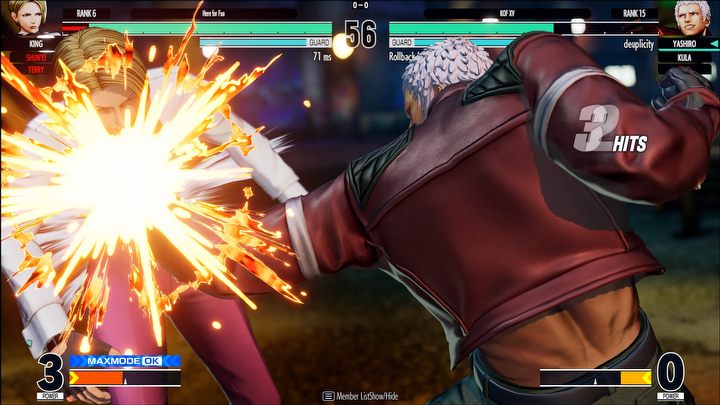 On the other hand, newly added Auto Combos simplify things just a little as it lets any character mash the light punch button a few times to pull off a set combo. If you have enough power meter, you can even finish the combo with a Special or Climax Super Special Move — and yes, this can take a huge chunk out of someone’s health bar if the first hit lands. Auto Combos at first seem overpowered, but they only work under certain conditions or if you link them from a Shatter Strike, for example. Otherwise, simply spamming them and getting blocked will leave you totally open for a punish. They’re great for beginners looking to experiment with combos, but your best bet is to learn more complex strings and use these only when necessary.

KOF 15’s multiplayer modes are nothing to write home about, but feature the usual ranked and casual matches as well as rooms you can customize for others to join. Thanks to its impressive rollback netcode, you should experience little to no input lag when playing online. During the review phase, I was only able to play in lobbies created by others so random matchmaking was not an option. Most of my matches were against opponents with ping in the low 100s, but even for those in the upper 100s to 200s, I could hardly notice any lag at all.

Its netcode is great news for a game that is meant to be played with others, since if you don’t have a buddy around, online is where you’ll be spending most of your time. You can even save up to 15 set teams for quick selections and search replays to learn from some of the best. After dozens of matches playing against other journalists and even community legends like Justin Wong, it’s clear that the fighting game community has another in-depth fighter on their hands. 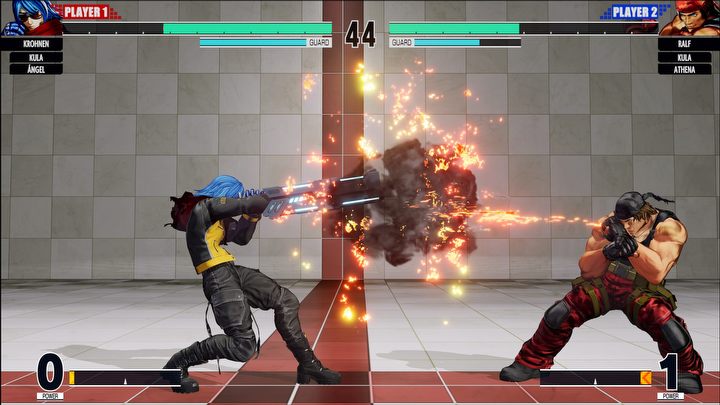 A noticeable upgrade from its predecessor, King of Fighters 15 provides another classic SNK experience with some added changes that make the game feel new without making it feel drastically different. It’s a safe move, sure, but it preserves what makes the game such a classic arcade experience and still manages to provide newcomers something to help them ease into the technicality the series is known for. Its single-player mode may be severely lacking, but, its smooth netcode and rewarding fighting system mean KOF 15 will be a hit in the community for those who take the time to master it. 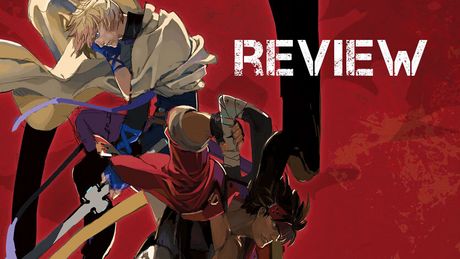 A series known for its stylized characters and flashy combos is back for another round of fights, but this time a few smart changes make it a lot easier to take in and appreciate what makes it so good in the first place. 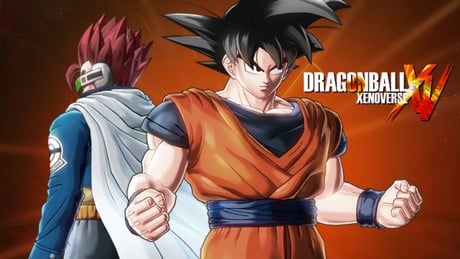