You are on vacation. You take your friends to a luxury hotel – all inclusive, five stars, pools and cocktail umbrellas. And it wasn't even that expensive. Once you get there, though, your elder brother, his girl and a few friends get kidnapped, and all the hope is with you. No, this is not the plot of Far Cry 3. So begins a rather pleasant adventure of Luigi, the younger and a little timid brother of Mario, and this is actually the third time, where he needs to save his friends from the etheric hands of the levitating sheets. Using a vacuum cleaner. Is the Green Mario a hero we deserve?

What is this game, actually?

This game is, of course, about the sad fate of being the inferior brother. Miro wrote a great text about it, so be sure to read it.

When we were talking in the newsroom about Luigi's Mansion 3, someone asked what kind of game it was. "I need to know what genre to set in the Encyclopedia." And I was baffled. It's ostensibly self-explanatory – just watch a few minutes of gameplay. But when you're supposed to classify and identify it, it turns out it's not that easy. I realized how unusual this production is. It's not an action game, although there are elements of it. It's not an adventure, though there are more mysteries in it than ghosts in a haunted house. This isn't a platformer, nor, an action-adventure game (Sony is rumored to have copyrights to this genre). I felt the best way to describe it was a-not-very-arcade-game with logical elements, and a side-perspective – but that's not the most practical definition. 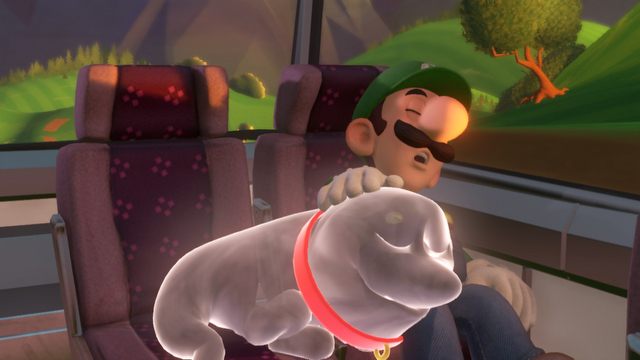 In Luigi's Mansion 3, our task is to free our friends from oppression – King Boo, the chief of all the chiefs among the ghosts kidnapped them and turned them into still images. To confront him, you need to climb all the way up the mansion. So we get into the elevator and painstakingly, level by level, work our way up through the dozen hours, clearing the rooms of the tainted ghosts inhabiting them. I liked that sense of progress – hour after hour, I was reaching new floors, climbing higher and higher. That's why I have a big issue with backtracking to previously completed levels. The were a little different than on the first run, but I still felt a little cheated. Why not just make the floors a bit smaller?

Fortunately for Luigi, he's not alone in his efforts – it would simply be too much for him; the hero isn't very heroic, and he goes about the haunted house shaking like jelly. As in previous installments, the green Mario is assisted by Professor Elvin Gadd, who, after recent adventures, has become a real specialist in ghosts. He gives us the Poltergusta G-00, the latest model of an anti-ghost vacuum cleaner. The letter "g" in the title does not appear there by accident – it's an additional feature that was not present in previous games: it now is possible to summon Gooigi, i.e. Luigi's goo double. Overall, the idea with two protagonists that we control in turns is really cool. The developers made good use of its potential – for example, in boss fights – which increased the number of different ways to overcome enemies or solving puzzles. Highly praiseworthy! 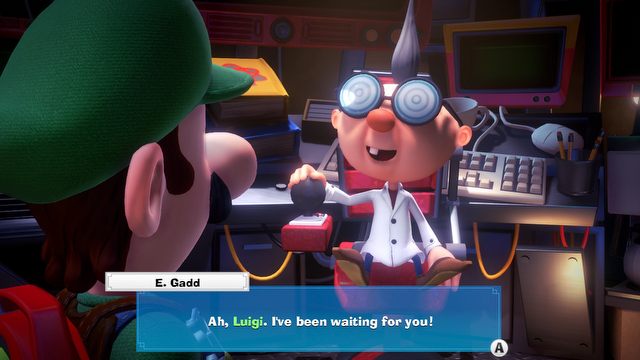 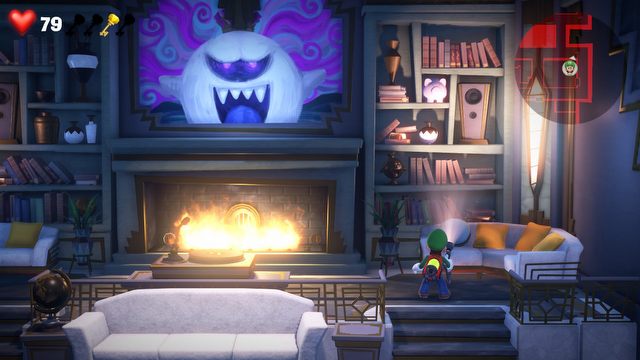 The pace of Luigi's Mansion 3 is very unusual. Games usually try to surprise us with plot-twists or some new mechanics. In LM3, there's nothing like this – after the first few hours, you will know everything there is. You may encounter some puzzles, or an atypical bossfight, but none of them relly changes the pace. Is it something bad? For some players, this will be a problem because the gameplay may seem somewhat boring. But it didn't bother me, because the foundations are simply satisfying and genuinely compelling – and although a few novelties here and there, especially at the end, wouldn't hurt, that's not something you could really hold against the game.

WHO YOU'RE TALKING TO, LUIGI?

Luigi is an unusual fellow. Did you know he's using consoles to communicate? In the first Luigi's Mansion, the one for GameCube, he spoke to Professor Elvin Gadd via a Gameboy Horror. In the next game, he got an upgrade – a DS (standing for Duel Scream). In the last game, Luigi further remains faithful to the Nintendo brand, but he also embraces the retro fad, switching to a Virtual Boo – obviously a reference to 1995's Virtual Boy, the grandfather of the PSVR and the Oculus.

I really liked the level design of the subsequent floors of the hotel. Almost every one of them, and there's a total of 17, is a small microcosm. So there's a gym, where the ghosts are pumping it up with weights, and at the end, we face an over-confident swimmer. There's a museum, with a mandatory, angry dinosaur, or a pyramid full of references to the Ancient Egypt. With this variety, we can never know what's yet to come – and it's hard to put the console off before we satisfy our curiosity by checking out which theme the next stage will feature. 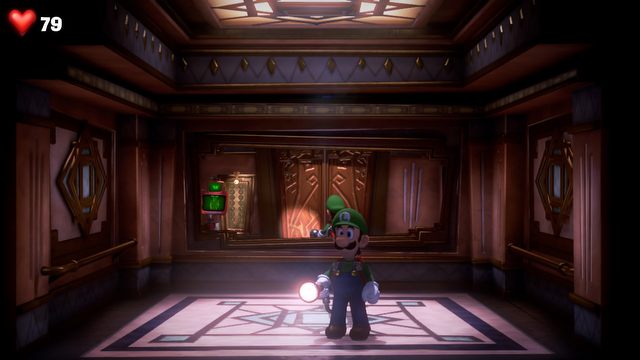 The vacuum cleaner mechanics are also simply brilliant. I could not help sucking into it absolutely everything I could. We literally take all the rooms apart – carpets, clothes, mugs, newspapers or posters. Luigi is a rampage, and I understand why the ghosts attack him like that. This gives us gold coins, which have a rather symbolic use (they can make the game a bit easier), but that doesn't really change anything. Most players don't leave a stone unturned in games, and for them, Luigi's Mansion 3 will be a field day. Too bad things aren't like that in real life, you know? Getting paid with gold for vacuum-cleaning your room...

Thorough exploration of Luigi's Mansion 3 is also rewarded in another way. Each level features several special gems hidden in various, obscure places (and obtaining them requires more than just getting the right key). And indeed, despite the fact that I have explored almost all nooks and crannies, I only managed to find half of all these. This is an optional activity, but it will appeal to everyone who likes to spend as much time as possible in their games. It's also similar with the two co-op modes, or finding the special ghosts that lurk in each level. Too bad Nintendo Switch doesn't support achievements, and so we end up completing all these side activities "just" for the sake of doing them, rather than maxing out the game. 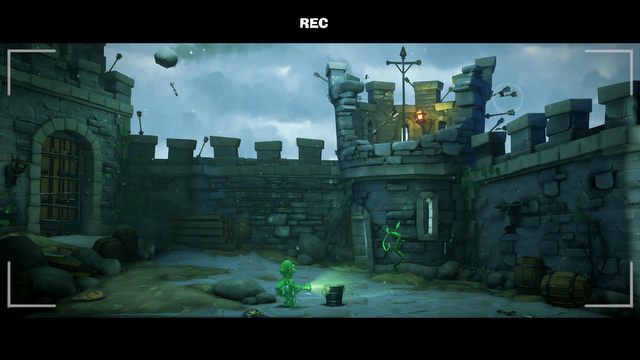 The culmination of each floor in Luigi's Mansion 3 is, of course, a boss fight. The vast majority of them have a few interesting gimmicks, about three classic phases – and, of course, the button for the elevator, allowing us to move to the next floor. However, next to excellent fights, there were also some which I just hated. Mostly because I couldn't figure out how to defeat the enemy. This lack of intuitiveness doesn't suit the rather casual nature of this game – maybe that's just my problem, but I wouldn't be surprised if less experienced players had trouble with some of the ghosts. A few other fragments of the game had a similar problem – it wasn't always obvious what we're supposed to do next. And though I was really trying pretty hard, I would eventually get stuck.

Getting lost from time to time isn't a big issue and happens in most games, but in mechanical terms, I had huge issues with aiming. The camerawork is impeccable, but aiming the stream of air or the flash of the light at the right spot could really be cumbersome. It's difficult to describe, you just need to try it – in any case, I had no such problems in the previous installment. Without a shadow of a doubt, I recognize this as the game's biggest flaw, which can – though not necessarily – be a great nuisance. But evaluation of these elements will be very personal. Still, I found myself gripping the console a little harder than usually.

I don't know if you've noticed, but Nintendo is a company that always specializes in games, about... nothing. Because what's Super Mario Odyssey or Splatoon about? Even the Legend of Zelda is only a couple of banal clichés of an anonymous hero and a kidnapped princess (the best proof of this is that the creators from Miyamoto themselves don't really care that much about the lore). But... this is perhaps the best thing about Nintendo. They're sole focus is games. Games that are supposed to be fun, based on fun mechanics, and inventive levels – and they really excel in these. And I hope it stays that way. Let's leave profound messages and epic stories to others. 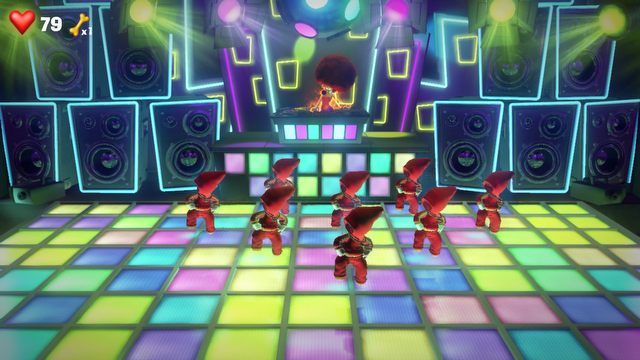 Have you had fun, Mr. Reviewer?

I can't really tell when the last time was I played a game I found genuinely fun, but didn't have much to say about it afterwards. I talk a lot about games both with my friends and colleagues, always trying to find and share something interesting. And here, I was taken aback. I didn't have anything to say. I could not say much about Luigi's Mansion 3 beyond that it was cool, sometimes annoying, and that the boss fights were very inventive. It's a bizarre game. There's a lot of fun, but little emotions. It's memorable, but at the same time unremarkable. If that surprises you, I can't help it. The few hours I spent in the game were simply fun.

This is my first encounter with this series. Completing the campaign and testing the coop modes in Luigi's Mansion 3 took me about 20 hours. The game would sometimes be annoying (particularly the aiming), but it wasn't terrible, and I also decided to play a bit of the previous installment, which I'd had on my 3DS for a long while. Few studios make games like LM3 – which makes me all the more appreciative of the developers' efforts.

According to our users, Luigi's Mansion 3 for Switch was a disappointment - the expectations before the release were higher than the current average user score.