Offering a new perspective on the series, Monster Hunter Stories was released back in 2016 on the Nintendo DS as an JRPG that focused on collecting monsters rather than hunting them down. It’s no surprise that its colorful sequel continues in this format but pleasantly expands this spin-off into an enjoyable adventure filled with rewarding quests and a rich creature management system that keeps you engrossed in all its robust offerings.

Wings of Ruin is a standalone game despite being a sequel so even if you never played the DS original, you won’t miss anything. Its story is perhaps one of its most basic elements and focuses on your character discovering the importance of a legendary monster which history foretells as being the bringer of destruction. Being a rider, a class of characters in the world who cares for monsters and befriends them, you learn to bond with its offspring and realize its true power. 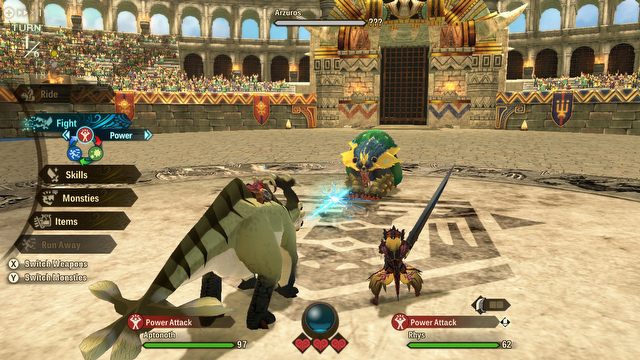 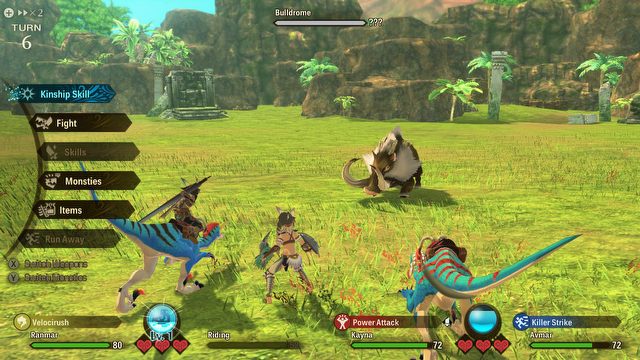 Despite its predictability, its plot gives you the impetus to go on your journey and set out into an sprawling world as you explore new areas and meet charming companions in the process. Your character doesn’t speak at all, but his mouthpiece comes in the form of a talking feline named Navirou, who also serves as the game’s comic relief. His humor misses rather than hits, and his voice is like a more annoying Olaf from Frozen making us think he is more suited for a younger audience who would better appreciate his jokes.

Navirou aside, plenty of vivid cutscenes give life to your journey and an epic soundtrack adds a layer of gravity to the game’s seemingly lighthearted aesthetic. Your adventure takes you to various locations throughout different regions, each with their own unique look and color palette. Wings of Ruin truly makes the most of the Switch’s output and gives you an experience that truly pulls you into its world. 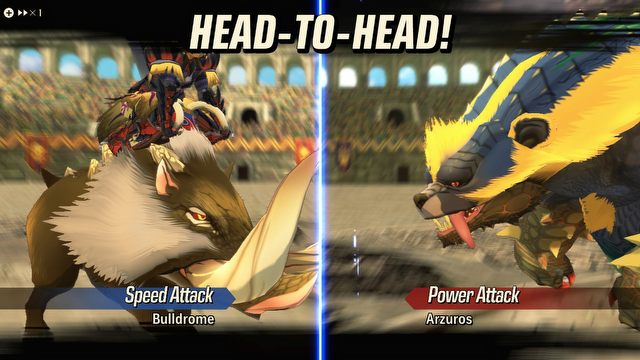 In regular Monster Hunter games, you hunt down species of monsters like Anjanaths, Kulu-Ya-Ku, and Aptonoths, but in Wings of Ruin, your focus is training them as monsties (the term for friendly monsters). Throughout your journey, you will be entering monster dens and stealing eggs from nests and taking them back to your stable where you can hatch them and see what kind of monster you got. There is a bit of a randomness to this method, but soon you will realize how to identify them based on the size, shape, and patterns on each egg. 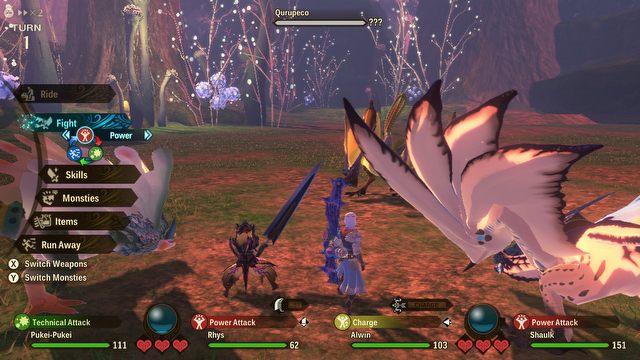 After your monstie hatches, you can add them to your party and engage in battles with wild monsters to further train them to be able to take on the more difficult monsters you find later on. During the first part of the game, your main focus will be to simply defeat monsters standing in your way, but after several hours, you will have more options when it comes to training them such as transferring their genes to produce monsters with abilities and strengths they normally wouldn’t have.

This system has so much potential, that you can literally spend hours creating your own team of perfect monsties or focus on the ones you like simply because they’re cute, can fly, or you get attached to their lovable faces. Wings of Ruin gives you the tools for you to become a master monstie maker and leaves it up to you to decide how deep you want to go. If you decide to take the fight online after unlocking multiplayer mode several hours into the game, creating these godlike monsters is a must. It may not be as in-depth as Pokemon, but it’s just as close if not as addicting. 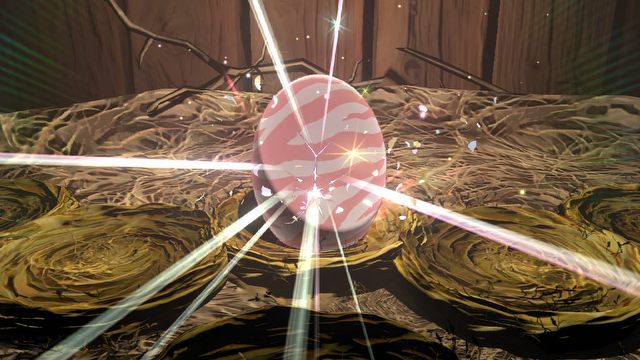 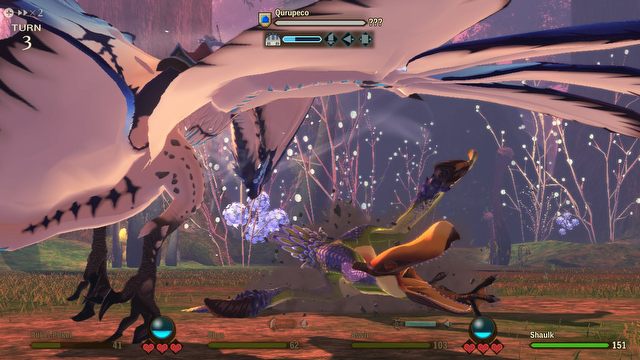 Besides just hatching eggs, riders also need to hunt monsters, too, and battles let you take your monsters out for a spin. Simple but surprisingly deep, the game’s turn-based combat system follows a rock-paper-scissors format featuring attacks that are classified as power, speed, or technique. Your first fight with a wild monster will be a surprise as you won’t know what kind of attack they will unleash, but future fights will teach you how to counter their attacks and win.

Your monsties fight alongside with you and fall under these three categories so certain species are better suited for certain battles. During a fight, your “Kinship” meter will increase and can eventually be used to perform special attacks or to team up with your monstie for added damage. Certain monsters will switch up their regular attacks forcing you to change your strategy or swap out your weapons or monsties to exploit their weaknesses. 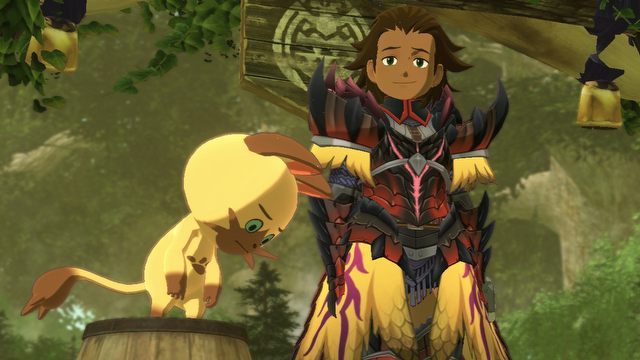 Overall, battles can be dynamic and require you think about certain actions at times, but if you simply want to level up your monsties, these can quickly become a slow, repetitive grind. The problem is that some battles can take several turns to complete and even speeding up the attack animations still makes them lag. Luckily, if you encounter monsters considerably weaker than you, the game will automatically count it as a victory and save you from a lengthy fight.

Another reason why you will need to grind sometimes is for supplies to craft more powerful weapons and armor. Just like the main series, the game features plenty of different weapons to play with but come with a hefty price requiring loot that only certain monsters drop. The process can be lengthy but oh-so rewarding to finally craft that gunlance you’ve had your eye on from the very beginning.

In addition to its story-driven missions, Wings of Ruin also features a plethora of quests to complete that reward you with key ingredients or rare bottle caps that you can trade in for items, armor, and special upgrades. Quests can range from defeating monsters to hatching eggs to collecting a number of items. You can also engage in trials and take on formidable monsters and win rare treasure based on how quickly and efficiently you finished the fight. 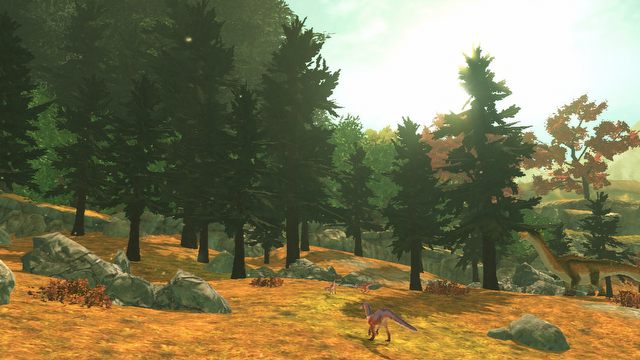 If that’s not enough, the game also contains various monster dens that will constantly generate as you play letting you devote time hunting down rare eggs for better monsties. You can also send your hatched monsties on quests to help them level up while you go on your own set of missions helping you save some time in the process. To say Wings of Ruin has plenty to keep you busy is an understatement.

Wings of Ruin’s strengths are easily noticeable and will keep you playing it for weeks. Its story may not be groundbreaking, but what it offers is crafted with love and is geared to both fans and newcomers to the series. It’s definitely not your average Monster Hunter game, but its mix of RPG and Pokemon-like elements make it its own kind of wonderful.