One of the gifts I bought my son for Christmas 1999 was the Nintendo 64. The original Pokémon Snap was one of the games I bought to go with the system. Unfortunately, Donkey Kong 64 wouldn’t arrive until the next day because “Santa” (ahem… Amazon) screwed up. And as that tumultuous day wound down, I found myself hanging out with my then girlfriend, my younger brothers, and a handful of their friends. We were enjoying a few holiday libations when I decided to give this goofy, photography game a go for myself. Within about 15 minutes or so, the whole crew had gathered around me, pointing out things I had missed, and vying for an opportunity to snap their own Pocket Monster photos. 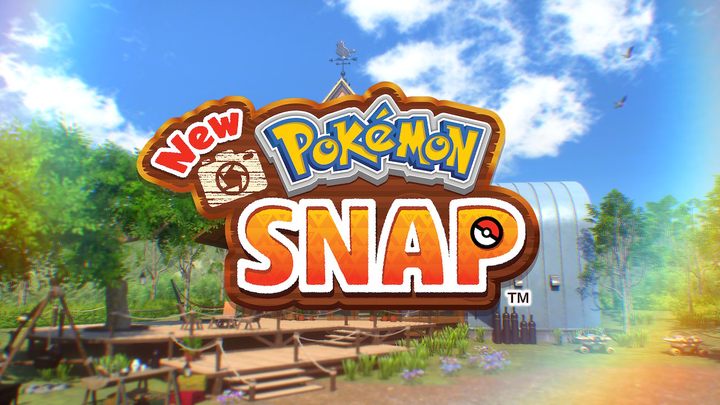 We’ve waited 22 years for this, Pokéfriends…

That’s’ the enduring memory I have of that Christmas… And of the enthralling power of the original Pokémon Snap as it enticed a gaggle of snarky twenty-somethings to put down their whiskey, beer, and eggnog to play, ostensibly, a “kid’s” game.

Now here we are in 2021 and a new iteration Pokemon Snap has been released for the Switch. Sad to say, I received some not-so-wonderful news about an hour or so before I started playing, but I’ll be damned if this game didn’t have me grinning from ear-to-ear almost as soon as I booted it up. And let’s get straight to the point: Yes, the New Pokemon Snap is better than the first title in every way. But, with twenty-plus years of technological advancements since the original was released, that's the very least the long-suffering Snap faithful should expect. To their credit, developer Bandai Namco does a good deal more than just add a new coat of paint to a rusty, aged concept – they truly bring the world of Pokémon to life like never before. 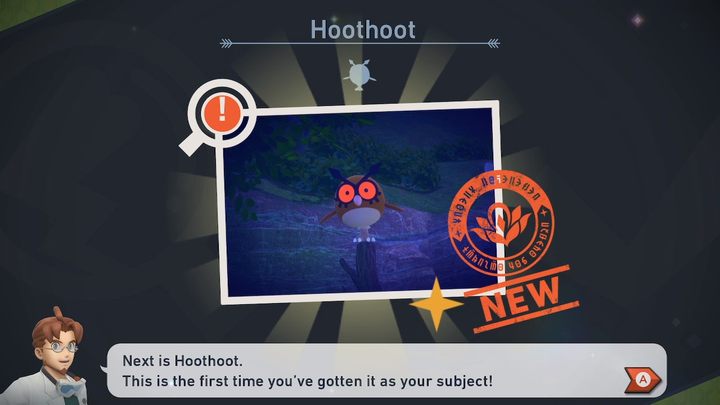 I’d better get a good score on this photo, Professor, or you and I are going to throw hands!

In 1999 there weren’t as many Pokémon as there are now and the good ol’ N64 simply didn’t have a ton of horsepower under the hood, so the original Pokémon Snap felt a bit empty and limited. In that respect, it is a good thing that the new version was held off for over two decades as enough Pokémon have been added (214 overall) and the choice was huge (there are now 898 Pokémon at last count) during the selection process for this experience.

New Pokémon Snap has stayed so true to the original that it actually feels more like a remake than a sequel. The concept of the game (i.e., go on a research safari of sorts and take pictures of Pokémon) is therefore virtually unchanged. So what makes New Pokémon Snap “new” then? The answer to this question, like the many wonders of the world of Pokémon itself, lies in the vibrant ecosystem, new progression system, and excellent grading system. 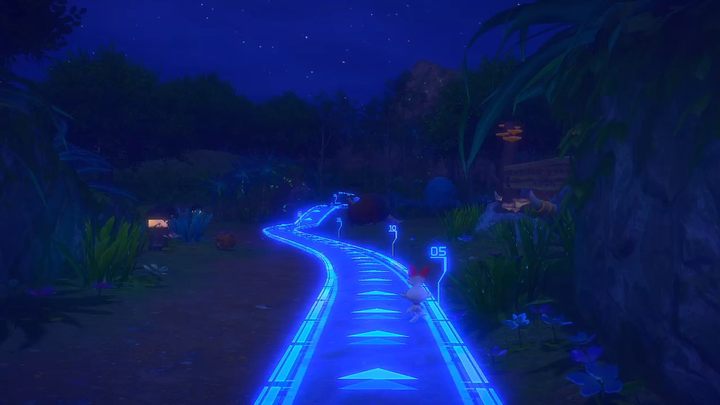 Nighttime is the right time to be snappin’ pictures of Pokémon.

In this title, you visit far-flung locales to photograph the Pokémon in their natural habitat. You do this on behalf of the professor/researcher of the new Lental region, Professor Mirror. By studying snapshots of all the Pokédudes (and dudettes) of this archipelago, Mirror hopes to decipher the mystery known as the “Illumina phenomenon.” A small photo album of the various Pokémon in the region should eventually provide the Professor with all the information he needs to figure out this secret.

A complete album consists of four different images of the same Pokémon. In each photo, a different pose or action is performed by the Pokémon, which is rated with a number of stars (one to four). For example, snap a photo of Pikachu eating garners you two stars, while a slumbering Pikachu is awarded three stars. The photo album is only complete when all actions/poses have been recorded.

At the end of a trek thorough an area (ranging from jungles, beaches, volcanoes and deserts), players can show one photo per Pokémon to the Professor. In order to get all the stars for each Pokémon, players have to plow through levels several times which is one of the game’s few downfalls.

Unlike the original, however, players are not forced to replay levels. Here in New Pokémon Snap, environments evolve along with the player's progress. That is, with each increased research level, the Pokemon become more accustomed to you and your flying bubble then show off a bit more of themselves and their typically playful shenanigans. And in this way, new routes, times, spawn areas, and resources are organically unlocked in each environment.

These subtle introductions ensure that the balance between new and repeating content is maintained. For example, it feels very refreshing when you can suddenly dive under the water after four strolls along the beach, especially since going in the water brings new, water-type Pokemon with it. In addition, it is a pretty cool touch that after a number of visits, normally “shy” Pokemon no longer fears you and will show their face and/or true nature. After all, a wary Gardevoir can’t be spotted just like that… 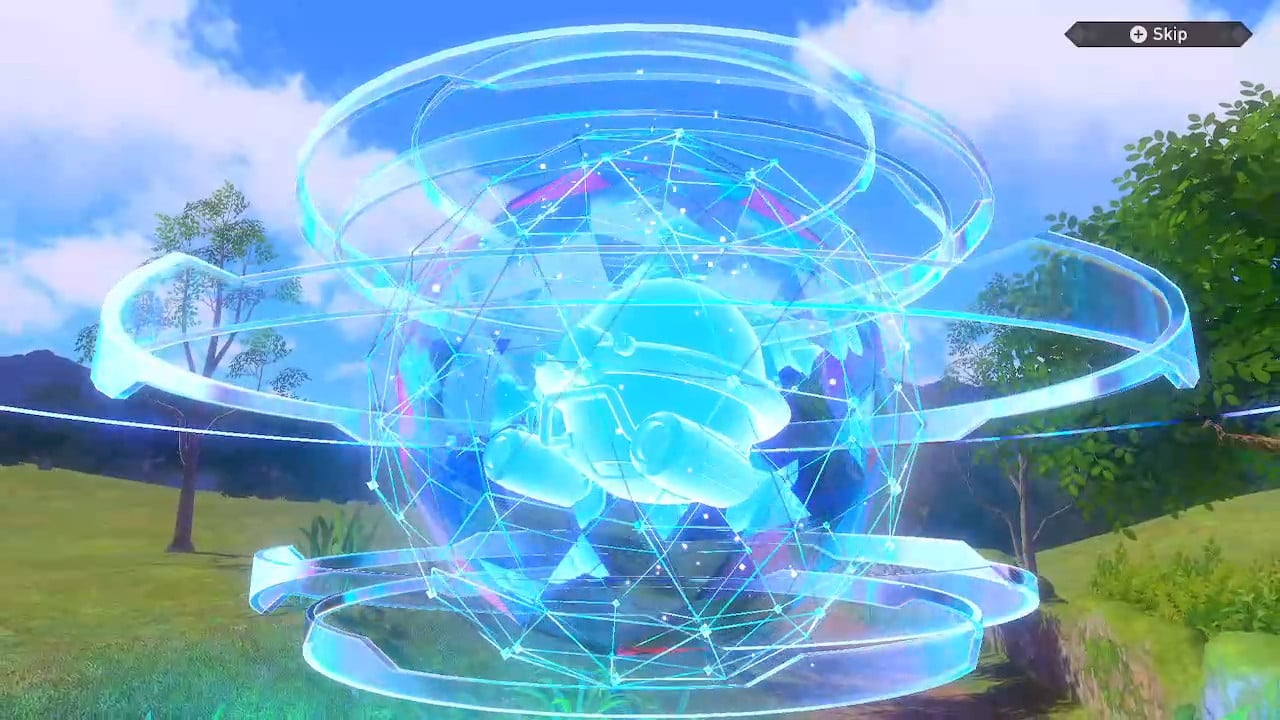 Get used to your time in the “bubble”.

Not only is it necessary, it’s a good practice to play areas multiple times as you want to take the best photos possible. During the first run through a level, there’s just too much going on process everything at once and, as a result, you often come away with some crappy snapshots. Mediocre photos yield few points and that ultimately reflect your reputation as a photographer. And as in the original Snap, the Professor again assesses all of your photos on a number of different aesthetic aspects: taking into account the size, position, and pose of the Pokémon, and now, even the background of the photo.

The algorithm behind the point system is put together surprisingly well. The first game really and truly paid attention to only one thing – the overall size of the creature you captured on film. Admittedly, in New Pokemon Snap size still accounts for most points, but it won’t cut it with just the size points alone. The balance with other factors mentioned above is quite good and it rarely happens where a less-than-stellar photo gets a good rating.

An excellent example of the improved rating system is that it considers the “balance” in the image (i.e., if there are several Pokemon in the picture, it’s important that they are evenly distributed throughout the picture itself). Overall, this will result in a diverse photo album and gives the impression that artistic approaches to your pictures are justly rewarded. 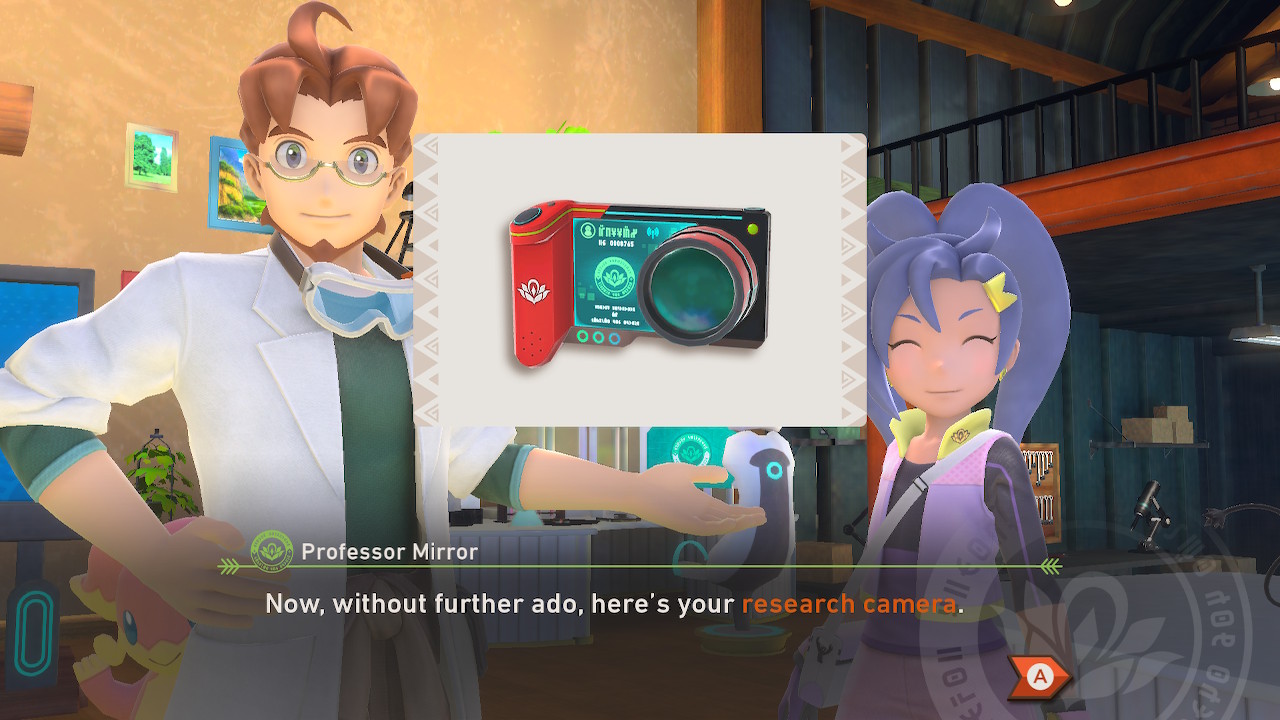 Professor Mirror is a terrible name. Cool camera though…

As enjoyable as snapping pictures is, New Pokemon Snap wouldn't have been nearly as good as it is if the environments weren't quite as expressive and vibrant as they are. The experience here could easily be described as “The first nature documentary in the world of Pokémon,” and all that's missing is the unmistakable Aussie accent of Steve Irwin. Because New Pokémon Snap's bubble-esque, all-terrain vehicle, the NEO-ONE, is so maneuverable, it’s possible to visit the most inaccessible and exotic places. As soon as you bump into a rare Pokémon in one of these lush, picturesque surroundings, it’s hard not to feel a quick jolt of excitement shoot through your body. Examples of moments like this for me are a massive Wailord emerging from the deep ocean an inch in front of me and a Tyranitar letting loose with a mighty roar right in my face. 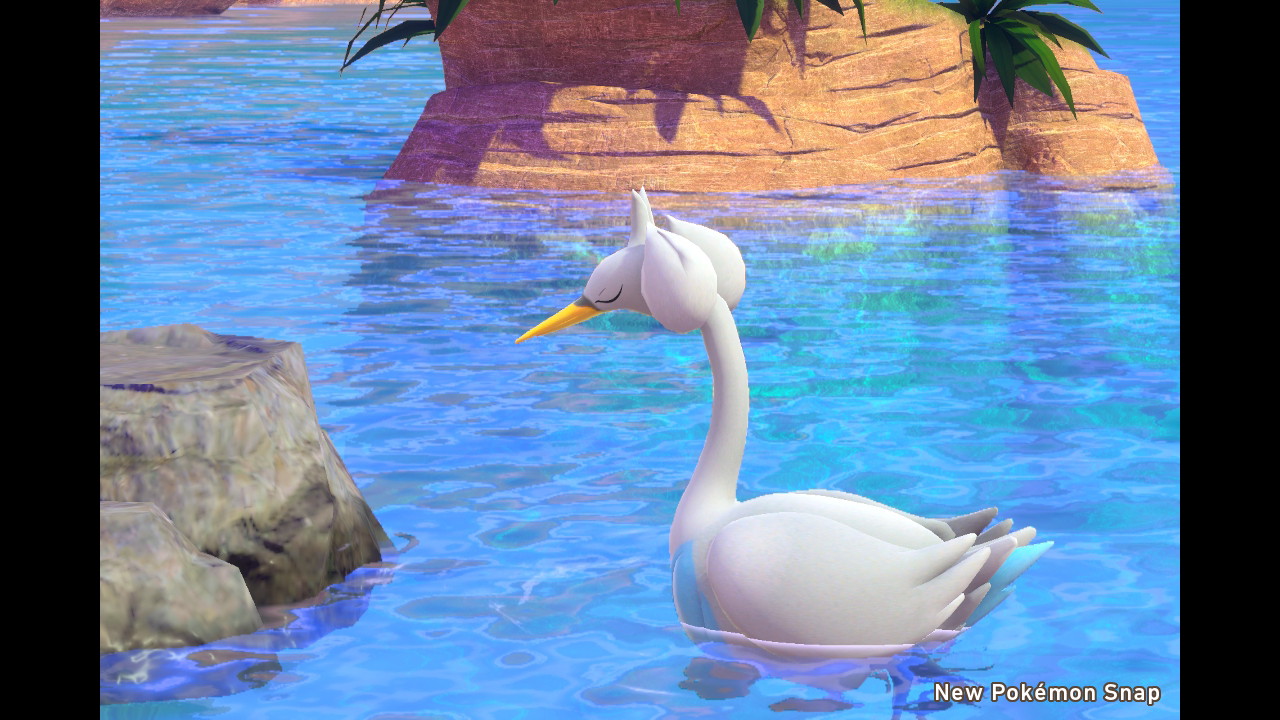 Another cool thing that New Pokémon Snap proposes is a degree of interaction with the Pokémon that you will just not find in any other Pokémon game. On top of that, players can apply their Pokémon knowledge in an entirely different way than usual, because when you understand the interests and character traits of a specific Pokémon, you will already know how best to approach and interact with the creature. You can do this with various items, such as the Fluffruit (apples) from the original title and a new scanner that sometimes attracts attention. But, what truly matters most is the close observation of the monsters… something that is less evident in the staple, RPG-like Pokemon games, but which plays a major role in the anime movies and series. As an example once again, if you happen to save a frightened Squirtle from a voracious Sharpedo, chances are that turtle-like Pokémon will thank you in a special way later on in the level, so have your camera ready!

There are instances though when New Pokemon Snap is a bit too faithful to the original experience as throwing the Fluffruit still feels a bit wonky and there are occasionally minor frame drops here and there. Also, the game has some graphical imperfections, such as textures with remarkably low resolution in some background areas (e.g., a glaring discrepancy between the beautifully animated water and the old-fashioned, angular/polygonal rock walls in the Founja Jungle area that was particularly striking). However, I only encountered those kinds of things in rare moments and most seemed to occur in certain dark areas. 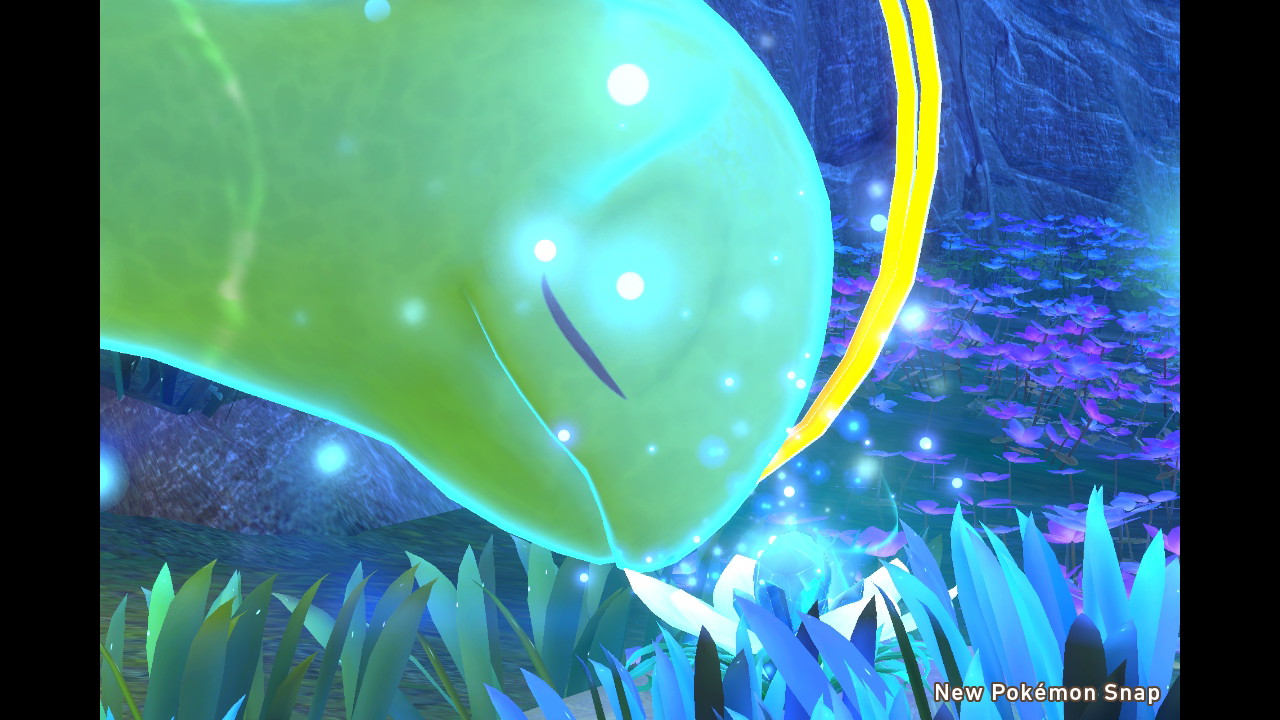 One of the cooler pictures I captured early on in New Pokémon Snap.

All in all, New Pokemon Snap shows how comprehensive the Pokémon universe has become after 25 years. Vibrant environments, hidden storylines, and visible character traits bring your favorite Pokémon to life like never before, and the improved progression/ points rating system ensures a satisfying gaming experience while not really straying all that far from what made the original game so memorable.