NieR Replicant ver.1.22474487139... is a remastering of the Japanese exclusive version of NieR Gestalt, a game first released in Europe and North America in 2010. Even if you played the original, chances are you never got to experience this side of the game’s story, and even if you imported the game and played through it already, this version of NieR Replicant is the definitive version you will want to play as it stays with you way after the credits roll. And for a game that is essentially over a decade old, that’s pretty darn impressive.

An epic tale amid a post-apocalyptic world

The backbone of what makes NieR such a compelling story is its various twists and cast of characters. As in the original Japanese version, your character, eponymously named Nier, is on a quest to cure his sister Yonah from her illness referred to as the Black Scrawl, and his travels span a bleak post-apocalyptic world ridden with enemies known as Shades. The game has two acts with the second one being a bit shorter and taking place a few years later. As soon as you begin playing, multiple unanswered questions are just the beginning of its plot drawing you into its world.

As you will discover, Nier’s journey takes him to the far corners of his world, where he eventually discovers a magical, wise-cracking tome named Grimoire Weiss that gifts him with magic abilities but also becomes the game’s source of self-referential humor whose witty lines bring some comedic relief to the more serious moments in your journey. You will also get two companions in your quest: a cursed woman named Kainé who runs around in lingerie for some inexplicable reason and a gentle boy named Emil with a secret power of his own. Every character you meet and interact with are memorable and unique, each adding to the overarching story. Every character is fully voiced and their lines are delivered with accuracy and poise which truly bring a sense of humanity to a world that seems devoid of it. 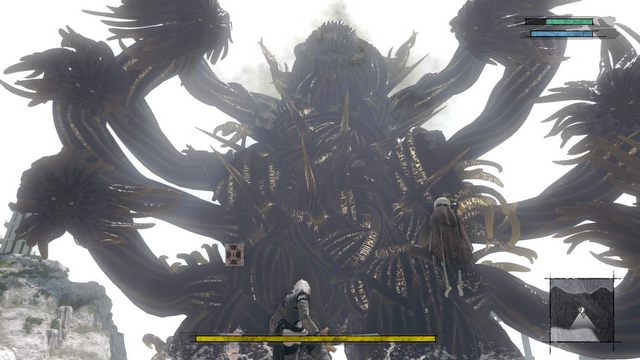 In fact, the world of NieR Replicant is vast and features many areas to explore from a desert to a forest to a village suspended over a giant chasm. Its visuals are an improvement from the original and feature soft lighting and detail that make your surroundings hauntingly beautiful. What’s more, your journey is accompanied by a soundtrack that truly amplifies the emotion that the game and countless scenes evoke. It’s a powerful blend of vocal hymns and orchestral arrangements that further add mystery and intrigue to your environment. 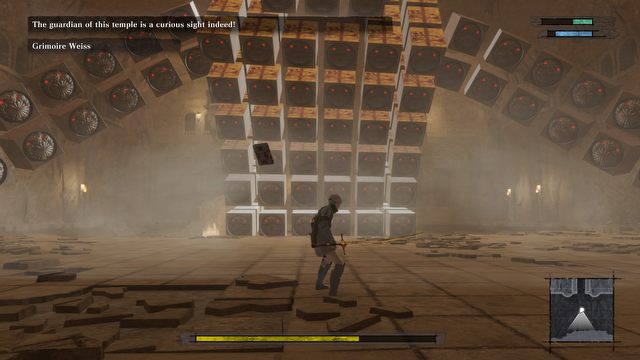 The original combat system has also been revamped and features a more fluid way to fight through all the Shade you will encounter. NieR is essentially a hack-and-slash game, and you can switch to one-handed or two-handed swords as well as spears on the fly during a fight. Each weapon has different uses so you will sometimes need to use a heavy two-handed blade to exploit an enemy weakness or switch to a spear to perform fast stabbing combos when their guard is down. You can also customize your weapons and attach special power-ups to them that increase their stats, item drop probability, and other factors letting you control what you want to focus on when you start a fight.

In addition to weapons, Grimoire Weiss also allows for using various magic attacks to give you additional coverage in battle. You can select what spells you want to map on your shoulder buttons, so you can easily experiment with different spells or swap them when you think a long-ranged spell is more fitting for a battle, for example, or if you need a magical barrier instead. And while at first, it will seem like you are simply mashing the attack button through the first act of the game, you will eventually fight more formidable enemies that require more thought and planning, forcing you to strategize which weapons and magic you want to equip. 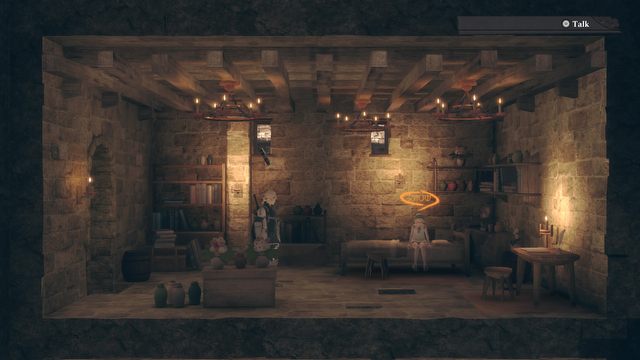 Now, a lot of the enemies you will be fighting in NieR are generic-looking Shade which will eventually spawn with armor as you level up and prove to take more hits than your average enemy. These enemies don’t offer much in the form of difficulty or variety to say the least, but the real stars of the show are the boss battles you will encounter. In fact, one of the only reasons you will want to play NieR is for the bosses alone.

As soon as you start one of these fights, you know you are in for a good time. The camera angles will change, a symphonic soundtrack will play, and you will need to think of ways to take it down. Most of these bosses are awe-inspiring giants and have multiple forms and cut scenes which further add to their size and importance. Some even turn your battlefield into an bullet-hell experience forcing you to dodge or reflect a myriad of balls coming from all directions. After the first couple of bosses you will fight you will be looking forward to the next one, and the next one, until you beat the game and realize how amazing each one was.

One other unique aspect of the game worth mentioning is the dream sequences you will encounter. Instead of being animated and voiced, dreams involve reading through short stories and sometimes answering questions about what you just read. Yes, it may seem like the reading comprehension section of one of those standardized tests you took in school, but these moments are actually well written and give the game a unique, more relaxing departure from the more action-oriented battles. Plus, later on these stories breath more life into your companions’ past.

In addition to running around the world trying to find a cure for Yonah’s illness, NieR also features plenty of side-quests for you to occupy your time with. And that’s essentially what they are there for. The game itself is around 15 hours long, but if you really want to stretch out your experience (and get money to buy every weapon in the game), you can take on quests from NPCs that really add no real value to your experience. 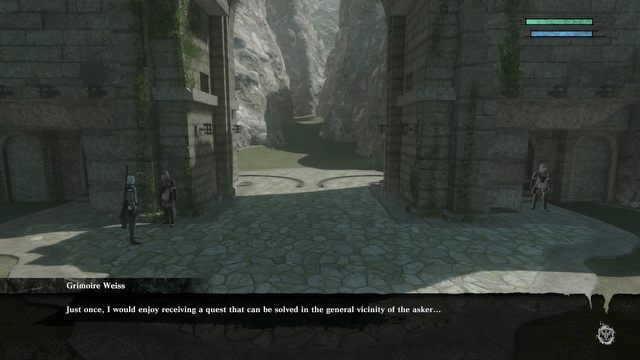 As mentioned before, your world is pretty big and because there is no true way to quick-travel to different areas, you will need to do a lot of running. It’s very disheartening getting an errand in town A to run to town B to then be told you need to run back to the first town. Not only that, but the magic and wonder of visiting a new area is destroyed the more you visit it, so if you are doing a fetch quest, you will run through the same place more times than you can count. Even Weiss has something to say about the fact that you are just running around wasting your time – and, believe us, he’s not wrong.

A game worth replaying 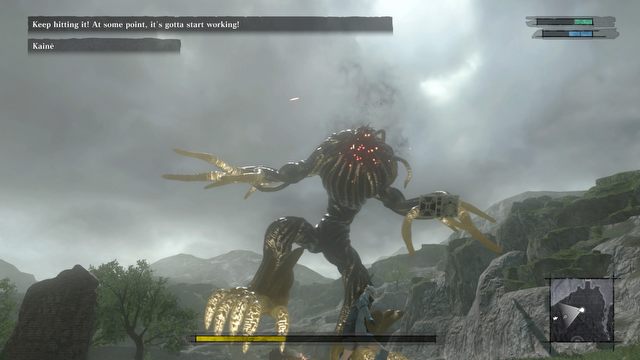 If you simply want to get the most of the NieR experience, you will want to beat the game a few times. There are a total of 5 endings to unlock, and each time you discover one, you unlock more backstory, special cut-scenes, and challenges that reward you for leveling up and continuing your journey multiple times. It’s one thing beating the game and realizing how awesome the story was, but it’s another to replay it and get a different perspective as to why a boss decided to fight you or what Kainé and Emil were thinking about during pivotal points in the story. Yes, you will be playing the game again and fighting the same enemies, but the feeling of idle repetition you get from the aforementioned side-quests is diminished thanks to these heartfelt additions and also the option to switch out the entire soundtrack for that of its sequel, NieR: Automata.

NieR Replicant starts off slow but its story and epic battles culminate into an experience unlike any other. Even after you beat the game the first time, you will want to play it again to uncover more of things you may have missed simply because the game didn’t reveal them all at first. And that’s not a bad thing. In fact, monotonous side-quests aside, NieR delivers a satisfying adventure and hones all the good parts of the original and adds to it enough improvements that will leave both fans and newcomers happy with the results. 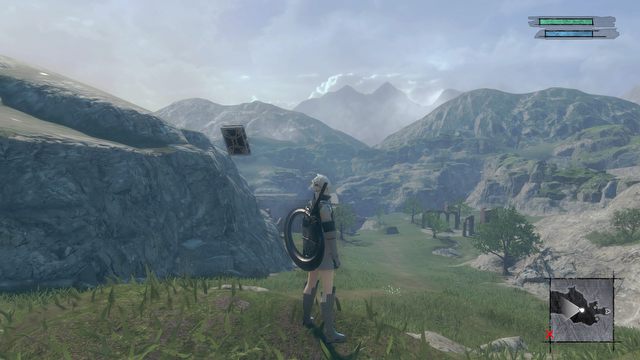 According to our users, NieR Replicant ver.1.22474487139... for PC was a disappointment - the expectations before the release were higher than the current average user score.