In a galaxy far, far away

Outriders begins with a prologue that lets you get a feel for the game, but  more importantly  sets the stage for your character and your actions. After Earth becomes unlivable, colony ships are built to transport the remaining population to a distant planet called Enoch, where civilization hopes to rebuild and start anew.

Your character is one of the Outriders  a team of soldiers who are among the first woken up from cryostasis and tasked to scout the land and prepare it for colonization. Unfortunately, a deadly energy storm referred to as the Anomaly thwarts the plans and hurts you so much that you need to reenter sleep. You wake up 31 years later, with strange powers, right in the middle of a civil war, in a world you barely know.

A game with this kind of exposition cant be bad, right? In fact, touted as a looter-shooter with RPG elements, Outriders seemed like the game that checks off many boxes and gives fans of all genres something to sink their teeth into. And while it does give you plenty of hours of looting and shooting, you only wish it gave you more of what you only get to see on the surface.

Fans of looter-shooters can easily get behind the core gameplay of Outriders, since each mission you play through essentially involves shooting your way through groups of soldiers or hostile creatures and getting from point A to point B. Its a very linear system that works fine during the first few parts of the game, but after a few hours, you begin wondering what else is there. In fact, you will know when a battle is about to begin not just because of the red indicator on your map, but also because its clearly telegraphed by location design, which suddenly becomes littered with obstacles to use as cover. And trust us, you will run into these areas a lot. 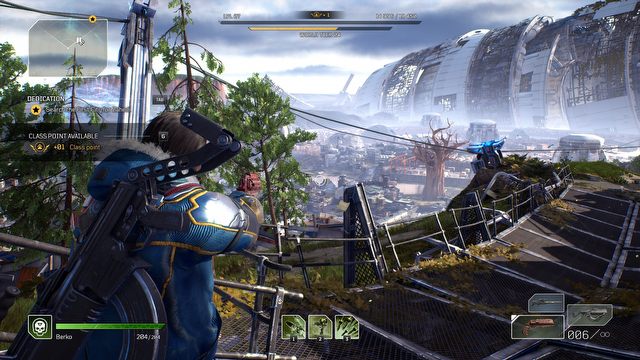 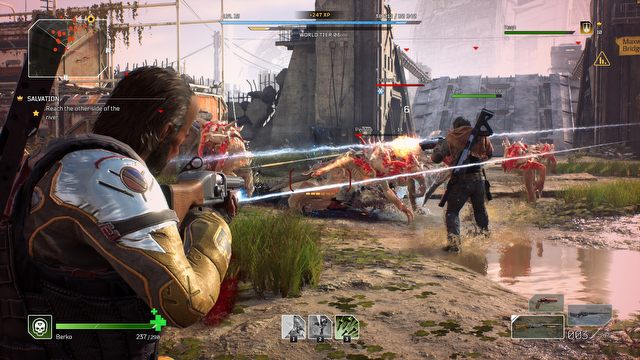 Despite their overall layout, missions do showcase at least a breadth of beautiful environments such as ruined crash sites, fiery volcanoes, or alien jungles, and make you wonder what kind of world Enoch would be like if things had been different.

Each part of the world you visit feels alive and foreign, and you can even collect lore on its surroundings, creatures, and the characters you interact with. Its a great way to remind you that your Outrider has been asleep for a few decades, and also brings you up to speed on the overall conflict. Dialogue and conversations also pop up in-between missions, giving you time to breathe, ask questions to learn more about certain motives or backstories, and spacing out the action before the next bloodfest commences.

Kill how you want

Outriders features four classes to choose, and skills to unlock as you level up, providing additional variety and allowing you to kill enemies how you see fit. We played as the Technomancer, allowing us to set up turrets that could freeze foes on the spot, whip out a rocket launcher at will, or utilize an area healing spell at will. This class is great if you like to snipe from afar, or if you simply like the idea of freezing your opponents and bashing them into pieces a la Sub-Zero.

The other three classes  Pyromancer, Trickster, and Devastator  offer you different ways to initiate combat and feel different in both movement and play style. Those who want more of a tank can choose the Devastator class, which excels in close combat and high defenses. Or you can also choose to play as the quick Trickster who plays a bit like a futuristic ninja with quick attacks and the ability to blink around the battlefield. 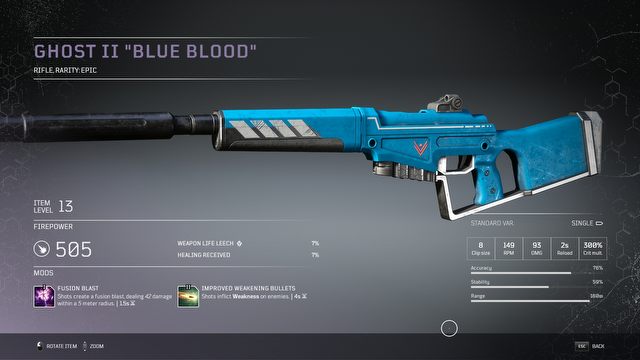 Whats more, you can customize your play style further by leveling up and unlocking paths on their skill trees. You can create hybrid characters that excel in offense and defense, for example, or specialize in whatever skill or power you fancy. And while some of these unlocks boost your skills or stats only slightly, you also have the option to reset all of your progress whenever you want and pick completely different paths. This freedom is perfect when you get stuck in a difficult area or simply want to try out different abilities to see how they fare. Not to mention it also helps to add the much-needed variety to your playthroughs.

Also adding to the fun is the games World Tier system, which lets you set the mission difficulty whenever you want. As your character levels up, you will unlock additional tiers that increase enemy levels around you, as well as the rarity of the loot you will be finding. Lets just say the highest tier puts enemies 12 levels ahead of you, so youll either win big or go home with nothing.

The weapons and armor you will find after you clear a horde of enemies depend on your world tier and come in three different rarity levels. This means you can easily find rare or legendary loot after every battle if you play a few tiers above your character level, giving you the option to often change up your equipment. As with other games in the genre, you will want to constantly be updating your gear and load-out as soon as you get new items, but thanks to the games crafting system, you can also scrap your weapons and recycle mods from one weapon and equip them to new ones. This allows you to keep your ability-boosting perks equipped at all times or even upgrade your existing weapons as long as you have the money to do so. 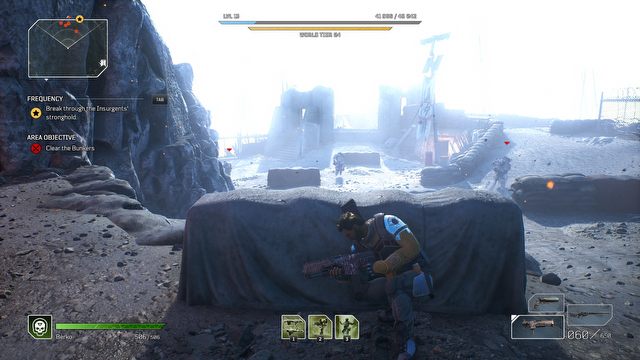 Outriders can be played solo or in a team of up to four players, with the idea being that each player on a party represents a different class. Each class offers something different in combat, so having a diverse, four-player team is the ideal way to complete missions. The idea is great on paper, but doesnt do so well in execution.

We ran into multiple issues trying to connect to any game during the launch weekend, so that already deterred our plans. You also cant select a specific mission to join unless you play with friends  so if youre trying to progress through the story, good luck finding someone to play along with unless you become the host. Whats worse, there is no voice nor text chat system in place, which naturally makes any form of communication cumbersome, the random emotes here and there notwithstanding. And even if you forego online co-op and just want to play alone, you may get kicked out of a server since the game requires an internet connection at all times.

Once you complete the story missions, you can complete side missions as many times as you want on higher difficulty levels for better loot, but you will have to ask yourself if you really want to relive shoot-outs in places youve been before.

Beating the game also unlocks Expeditions which is a challenging mode that spans fifteen missions and Challenge Tiers. These tiers act like World Tiers but increase the difficulty of these missions only, and unlock more tiers as you complete more difficult missions.

You will want to play these to unlock better loot for your character and if you crave a more difficult experience. Some of these missions do add more lore to the games universe, but they are mainly here to simply give you something to play after you beat the main story. And like other side missions, you can play them ad nauseam for better rewards. 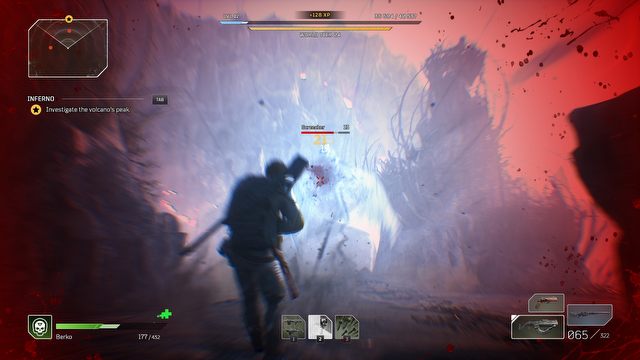 And thats the idea of Outriders in a nutshell. You get a lot of great ways to play it and lots of loot to make your character be the most legendary soldier in the galaxy, but unless you dont mind replaying mission or doing a lot of ducking and covering, it may not be enough to keep you hooked past the main missions which provide you with all that plot and climax required to keep going.

If you are a fan of looter shooters, you most likely play them for the thrill of getting through missions, killing as many baddies as possible, and scoring some legendary weapons to repeat this process at a higher difficulty. If you dont mind this repetition, then Outriders has you covered. 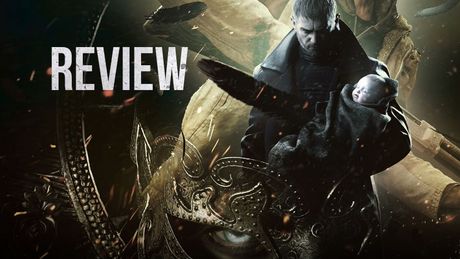 Are you brave enough to discover what lies waiting beyond the village? The frights and chills are so worth it, as the next entry in the famed series puts together satisfying mechanics and enthralling, scary story.