After several lean years, the Japanese giant Nintendo finally began to open up to new trends, and took the market of mobile games by storm. Thanks to this change of attitude, we’ve now got a second app – after not so well received Miitomo – dedicated to smartphones and tablets and utilizing augmented reality – Pokemon GO. During the first few weeks following the American release, the game gathered an enormous fanbase and became a phenomenon unlike any other in the world of video games. Catching Pokemons is truly addictive, but it can become boring pretty soon – apart from collecting the creatures and engaging in occasional fights for spots, there’s simply nothing else to do there. After the first bitter-sweet impressions, the time has come to rate the smash hit, and that’s not easy an easy thing to do – on the one hand, it’s a completely unparalleled experience, and the fanbase is overwhelmingly enthusiastic; on the other, the game doesn’t offer enough to engage the players in the long run, and can disappoint the long-time fans of mainstream Pokemon games.

What makes Pokemon GO an ingenious idea that didn’t work out as planned? Let’s take a look. 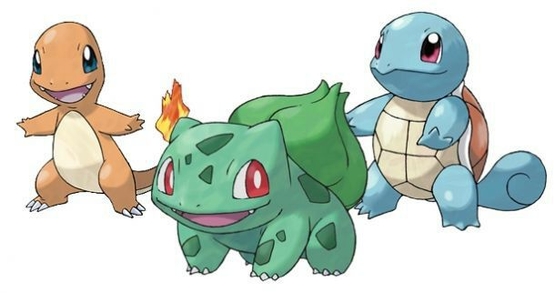 Just as in the cult Pokemon Red and Blue, we can start the adventure with Bulbasaur, Charmander or Squirtle (and after using a certain trick – also Pikachu). The Pokedex (index of Pokemons) contains 147 out of 151 first-generation Pokemons. The decision to include them in the game was perfect, since the first Pokemons are considered to be the best by many people.

Pikachu, I choose you!

Pokemon GO begins with the creation of player’s avatar. A moment later we choose – as befits a Pokemon game – one of the initially available Pokemons, and after a vague tutorial, we set off into the vast world, almost like Ash Ketchum did in the first episode of the legendary series. The game uses our phones’ GPS location and creates a map that is based on the real world. While wandering the area, we track Pokemons and acquire them for our collection by completing a small mini-game. The location of some of the Pokemons is determined by the element they represent, and some of them are much more rare than others. Unfortunately, those of you who hoped the get, for example, Pikachu, or other childhood favorites, will have to be very patient, since for the majority of time you stumble upon the same stock of Pokemons – dozens of other, more powerful ones, can only be obtained by the most stubborn players. 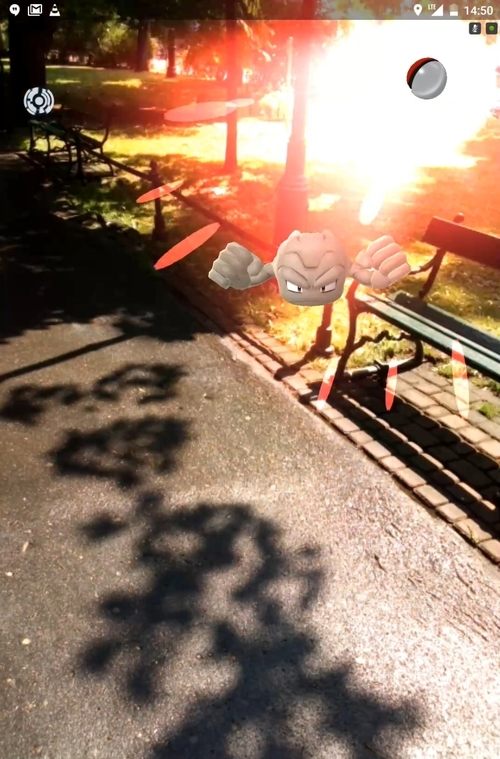 After spending more time with the game, it became apparent that the “regionalization” of Pokemons doesn’t always work as it should – we’ve caught one, which should be found near water, in our office. Just as in the other games of the series, the creatures are caught via Pokeballs, which have to be “thrown” at the encountered Pokemon. During the game, in the lower-right corner of the screen, the Pokemons that can be found in the area are shown, and the icon with paws next to them represents the distance that separates them from the player. One or two icons mean that the Pokemon can be just around the corner or in the area, but three (which is the case most of the time – especially now with the bugged version of the app) can send you on a goose chase. 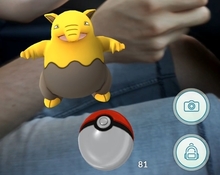 When the process of “catching ‘em” begins, the app shows the view from the camera with the Pokemon added on top of it. Throwing the Pokeball into a size-changing circle around it means it is caught – a bonus for accuracy can also be received. If you don’t like this system for some reason, you can quickly turn augmented reality off, and the background will change. The mechanics of catching Pokemons aren’t explained, unfortunately – the fact that we can curve Pokeballs is something we’ll have to learn from a buddy who found out by chance or from the Internet.

The Pokeballs are not unlimited. They can be acquired, along with other useful items such as potions, in Pokestops, which are usually located near monuments or other characteristic spots in cities. These could be churches, distinctive murals, or statues – points of interest, in short. The places where Pokestops can be found are not coincidental – they match the locations from other game by Niantic – Ingress, a more complex game working on a similar premise, set in a science-fiction universe. Finding a rare Pokemon in your neighborhood near a mural that you had no idea was there is a very cool experience. The fact that you have to explore the real world to play it is the game’s best feature.

According to our users, Pokemon GO for AND was a disappointment - the expectations before the release were higher than the current average user score.