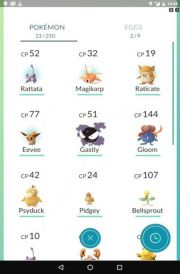 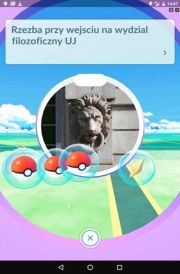 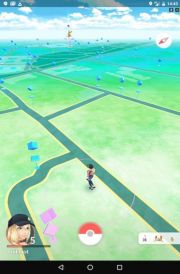 Pokemon GO for AND and iOS is an incredibly original RPG combining the world of charming Pocket Monsters with mobile technology's latest achievements and the so-called Augmented Reality. The game was developed as an effect of The Pokemon Company (the exlusive owner of the rights to the titular creatures) cooperating with Niantic Labs - a team belonging to Google and known mainly for Ingress, which is a popular application.

The game was deprived of a plot as such – similar to the majority of installments belonging to this popular franchise, the player's goal here is to collect Pokemon, train them and send to battles taking place on special arenas. However, the gameplay itself stands in contrast to what classic Pokemon games represent (popular mainly from both home consoles and hand-helds created by Nintendo). Although the game borrows from the mechanics of the previous installments (the player explores the world in search for subsequent Pokemon species mainly), the virtual world was replaced here by the real one, and the screen of your phone serves as a minimap. The player traverses this "world in-between of worlds" as an avatar and searches for different Pokemon using their smartphone.

On the launch, 150 classic Pokemon appeared in the game. Interestingly, the player catches them in their natural habitats, for instance, grass pokemon can be found in forests, water ones near rivers, lakes or seas, etc. Contrary to the majority of Pokemon games, the player does not have to fight the creatures encountered in order to catch them. A 3D Pokemon model appears in the environment viewed through the camera of a smartphone, and the player is required to launch a Pokeball at it. Throwing more than one Pokeball can be required when trying to catch one of the stronger monsters that manage to free themselves.

The character development system is slightly different here as well. In Pokemon GO, instead of particular monsters leveling up, it is the player's avatar who earns experience points for completing certain quests, such as catching a new Pokemon or visiting the so-called PokeStops - those are different interesting places marked on the map. The Pokemon here are generally described by their Combat Points, but they can have different kinds of attacks as well. Interestingly, instead of finding a Pokemon, the player can stumble on their egg. In order for a young specimen to appear, the player will have to travel a specified number of kilometers or use a special incubator. Certain Pokemon can also evolve and evolve into more and more powerful forms. The player uses special sweets resembling Rare Candy from the main installments in the Pokemon series to train the monsters and help them evolve.

Because the gameplay in Pokemon GO for AND and iOS is based on an unusual concept, the player enjoys a solo experience for the most part, exploring the real world and collecting different Pokemon. Once the player's avatar has reached level 5, it is possible to send one's monsters to battles taking place in virtual gyms scattered throughout "the game world". This kind of competition does not have any form of standard PvP experience however. The player can order a monster of theirs to remain at an arena unconquered by any other player. As long as one's monster remains undefeated, they stay in the location. The players can join one of three teams and defend particular arenas collectively or attack a Poke Gym belonging to the opponents. Apart from that, the final version of the game features social options included in the franchise's most recent installments. For example, this allows the players to connect via Bluetooth to trade and exchange their Pokemon.

Pokemon GO makes use of the so-called Augmented Reality. Thus the game engine places additional, three-dimensional objects in the real-world environments viewed through the camera of one's mobile device. In order for the game to work perfectly, having an active GPS module is required, though the game is also playable using Wi-Fi combined with phone localization. What is definitely worth mentioning is that a special gadget called Pokemon GO Plus was created specifically for the game and it resembles a smartwatch. Having connected the device to one's smartphone, it will generate a vibration when a Pokemon appears in the area. Consequently, this allows for parents and their children going out to search for sympathetic monsters together for instance.

Pokemon GO for AND and iOS stands out with uniqueness of experience it offers – instead of sitting in front of a TV screen or a PC monitor, the player is encouraged to spend their time outside and enjoy fresh air while engaging in this "semi-virtual" experience. However, it turns out that the gameplay formula delivered by Niantic Labs may cause many dangerous occurences. Information about teens desperate to catch their favourite Pokemon, and causing very dangerous situations as a result, appeared several days after the game's release. The Australian Police sent an official message to the players, who were told not to enter buildings when playing the game, because Pokemon can be caught also from the outside.