If Astro’s Playroom was an appetizer to the kinds of games the PlayStation 5 can dish out, Ratchet and Clank: Rift Apart is both the main course and the desert, and the cherry on top of that desert. Known for its blend of sarcasm, platforming, and lovable characters ranging from dry to downright kooky, Insomniac Game’s newest title comes after a hiatus lasting from 2013 till now, so it’s easy to see how much the series has grown up since the PlayStation 3. Fans of the series, and in fact anyone who enjoys exceptionally fluid, expansive, and just plain impressive games on the PS5 are in for a good time and then some.

Picking up right where it left off, Rift Apart is a direct sequel to Into the Nexus and continues the adventures of the furry Lombax hero Ratchet and his trusty robot friend Clank. Ever the antagonist, Dr. Nefarious steals a dimension-creating device causing rifts in spacetime, threatening the safety of this universe and the parallel ones too. The concept of dimensions isn’t original considering Sony’s own Crash Bandicoot used it as theme in its last game, but Rift Apart cleverly utilizes this as the basis for more significant character development and gameplay elements.

For starters, Rift Apart features plenty of mature talking points despite its kid-friendly attire. Yes, the game will still have you crack a smile every now and then with its impressive cast and hilarious one-liners: Clank is still as dry as dust and the Zurkon family occupies a dear spot in our hearts. However, there’s also a nuanced depth to this story as it touches on issues like belonging, isolation, and forgiveness. For example Rivet, the new protagonist of the game, easily becomes a cherished part of the family due in part to Jennifer Hale’s excellent voice lines, but also because she is essentially an alternate representation of Ratchet himself, a dimensional counterpart of sorts, searching for herself. 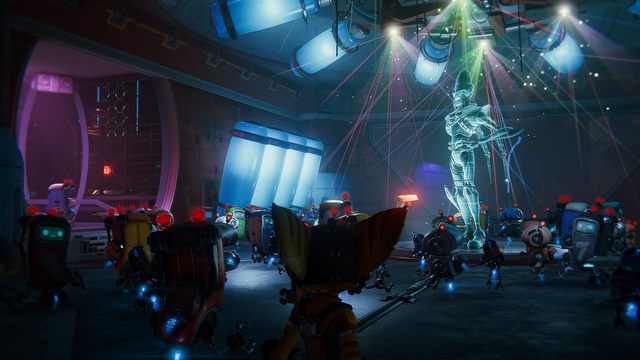 She and other new characters you meet have their own backstories and you truly feel for them in their plight or they simply stick with you because they’re so quirky and funny. Familiar faces make an appearance from past games, too, but newcomers to the series won’t feel left out since each one features a dimensional counterpart whose new stories you will see play out. These nods to past characters and worlds are effective as they present this installment as a continuation of past adventures feeling familiar, but at the same time new.

Along the same lines, gameplay is also true to the Ratchet and Clank heritage formula and mixes platforming and gunplay elements as Ratchet and Rivet travel to various planets to fix what Dr. Nefarious ruined. Each one has a central objective, but you can also complete optional quests for unique rewards. There’s also a lot more verticality to each place you visit, making each world feel pretty expansive and worth exploring. Added elements such as advance grappling mechanics and a flashy dodging system make for fluid controls that are augmented by some intense moments.

The game has rail grinding, high-speed beetle jet skis, and even clashes that rival blockbuster battles. There is one area that features a giant robot that’s tracking you down as you’re grinding through rails that eventually start disassembling. You’ll need to constantly jump between them to avoid getting hit and it all culminates with an intense leap and a touching moment between Rivet and Clank. These moments, coupled with the processing power of the PS5, will keep you on the edge of your seat – and the game is brimming with them. 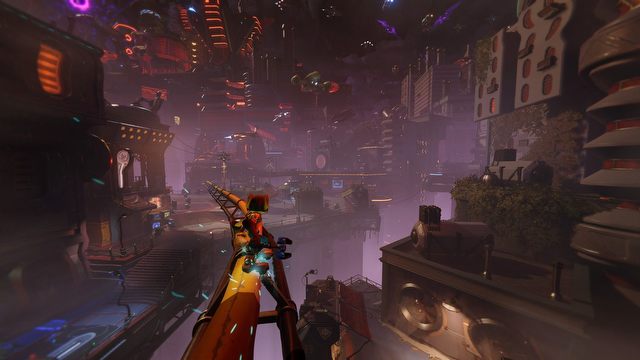 Battles, too, are high-octane moments that require you mastering your arsenal of weaponry and using those weapons you think make more sense in a particular situation. Sure, you can whack your enemies with your wrench or hammer, but the real mainstay of the game are various guns that you can acquire, which come with their own unique effects and damage. Some also behave differently depending on how hard you press on the controller’s trigger button, offering you a unique sense of touch. Staples like shotguns, rifles, and pistols are available, but unlockable alien guns provide unique coverage options when you’re in a pinch. One turns enemies into sliding ice cubes, another deploys trigger-happy mushrooms, and one gun even turns your foes into topiary for you to “trim down to size.” 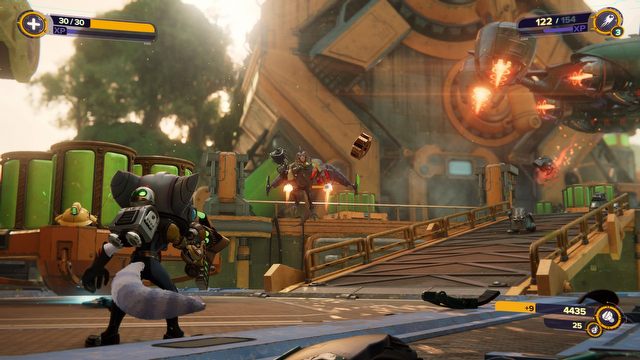 Not only can you swap out to different weapons on the fly, but you can also continuously upgrade them to suit your playstyle by collecting raritanium ore scattered throughout each world and trading them in. Your favorite guns level up the more you use them, so the system lets you carry the loadouts you want to focus on, and gives you the option to prioritize ammo, damage , or other specs.

The game isn’t that challenging under its default difficulty, but you will need to know how to effectively dodge and attack your foes if you want to survive. By the time you get to the final boss fight, you may have fully upgraded your main arsenal, but focusing on collecting enough materials is just as important as knowing which guns to use.

A break from the action

During certain parts, you will also get to play as Clank in puzzle-like platforming levels. Each one is pretty simple, but does require some thinking as you need to guide astral armies of Clank towards the level’s exit using various orbs to speed things up, lower platforms, or raise them up. While they do get progressively more complex, we definitely wanted some more challenge, as these are the only form of puzzle the game offers.

Another form of gameplay comes in 3D twin-stick shooting mini-levels that let you play as spider-robot named Glitch who needs to shoot down viruses inside computer terminals. These are simple and straightforward, but feature unique layouts that let you walk up walls and turn the surroundings upside down when you’re on ceilings. Alongside Clank’s sections, these mini-levels let you take a break from the action while still feeling like an integral part of the plot. 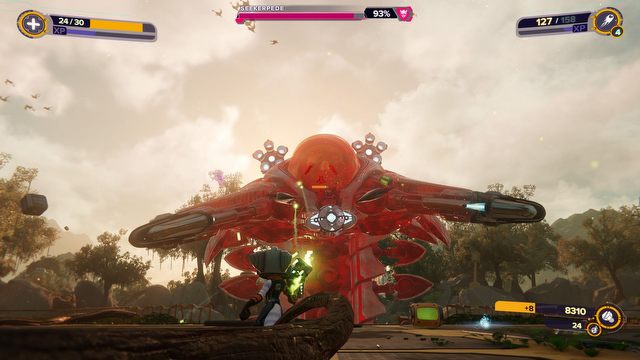 Fans who love a challenge will be nicely rewarded with the amount of side action you can do to keep yourself busy. Worlds also contain dimensional pockets you can find that offer specialized platforming challenges and reward you with new armor sets that provide buffs to your stats and other unique effects. You can also partake in tournament battles with unique challenge requirements to unlock even more goodies.

Additionally, you can also spend time tracking down the various collectibles that range from golden bolts to unlock cosmetic effects to your game or spy bots that unlock new weapons. It also wouldn’t be a Ratchet and Clank game without Challenge Mode which carries over all of your current progress over to a new save file, and you can unlock this after you beat the game. The story may take you around 12 hours to finish, but the added collectibles, quests, and difficulty modes help extend the experience. 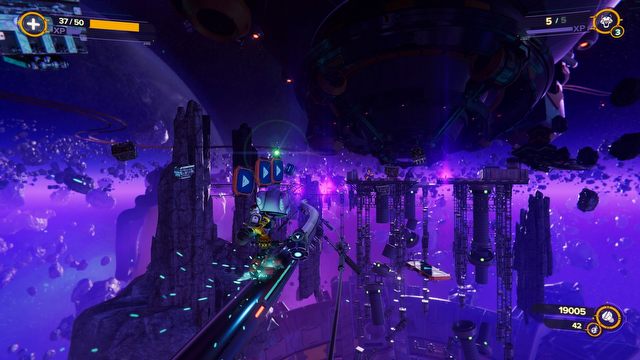 From a sensory standpoint, Ratchet and Clank is the best game out there right now. From the adorable bobbing of Lombax ears as you run, to the Pixar-like quality of every cutscene – your eyes will be in for a feast. Scene transitions are so fluid that sometimes you will miss the fact a cutscene has ended and you can control your character again. Everything also looks even better once you select the visual mode best suited for your monitor: Fidelity for 4K at 30 FPS, Performance for 4K at 60 FPS, or Performance RT for 4K at 60 FPS with ray tracing.

Rivaling its visual output, the game also sounds amazing especially when you put on some 3-D audio headphones and fully immerse yourself in the experience. Even without them, your controller will complement what’s happening on the big screen and offer appropriate sounds like the jingling of bolts and rumble when you collect some after defeating an enemy. Coupled with its action and storyline, the game becomes a truly immersive experience. 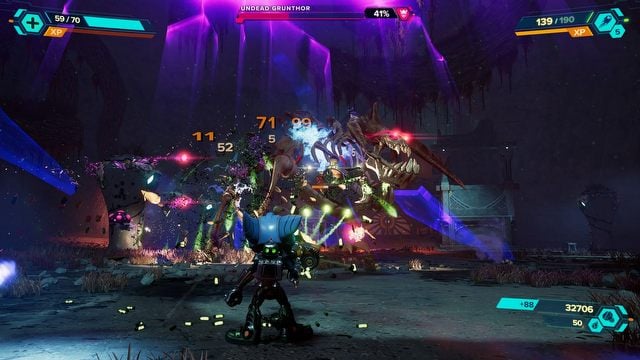 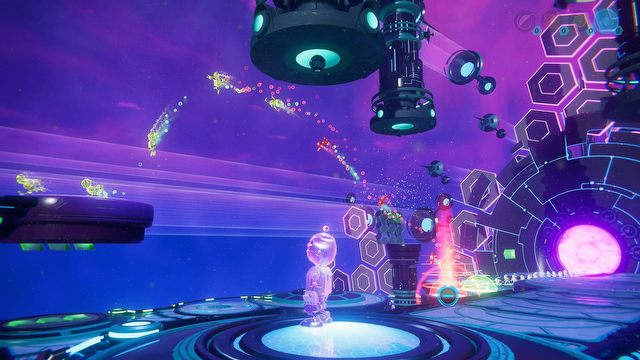 What’s so good about this installment of Ratchet and Clank is that it is a true labor of love. There is no other way a game can feel so good, play so well, and take you on an impressive adventure all without that special ingredient to keep it going. The definition of a next-gen title, Ratchet and Clank: Rift Apart is a must-play that will leave you super satisfied and hungry for another big game like this one.