For some time now, tinkering under the hood of a car has been a favorite activity for people other than mechanics with a lot of experience under their belts who are accustomed to the difficult art of repairing vehicles in various workshops on a daily basis. All of a sudden, it became the domain of gamers, spurred by Car Mechanic Simulator 2014 from Polish studio Red Dot Games. This year’s follow-up to the abovementioned production has to confront the high expectations of many fans of the original game. Is this rather original gameplay concept slowly exhausting its potential?

The success of CMS 2014 surprised just about everyone, including the developers themselves. This unassuming project has turned into a production that managed to sell hundreds of thousands of copies. The credit goes to the quality of the game as well as its unique theme. Ever since the legendary Gearhead Garage, there has been a vacuum in the market waiting to be filled by a decent car mechanic simulator. The sequel to 2014’s surprising success was to confirm that the Polish developers know what they're doing and are able to carry out a solid makeover and tweak their export-worthy virtual gem. Good news is that they did the trick.

Grab Your Monkey Wrench And Get Down To Work!

Car Mechanic Simulator 2015 could be easily described in one sentence: there is more of everything here, and the car repairs we carry out are much more complex. I could see it for myself when I first sat down to replace one of the engine parts; in the previous edition all we could do was dismantle several spark plugs and wires or a couple of overhead elements. Imagine my surprise when I was faced with the task of exchanging a piston located right in the middle of the power unit. Disassembly of parts prior to accessing the malfunctioning module takes at least a few minutes – slowly and gradually we reach the goal by breaking down the engine and loosening various lids, coils, and other components. It’s not an exaggeration to say that now we can find as many parts under the hood alone as we did in the whole car in the previous installment of the series. Without a doubt, individual tasks have become far more complex; according to the developers, the game includes about 200 vehicle parts to repair. Now we can do far more than just tinker with the engine and suspension. Our tasks will also involve overhauling the body as well as replacing fenders, doors or the trunk lid. What's more, thanks to the paint shop we will be able to add a selected color to our vehicle, even though it is a rather inconsequential feature. 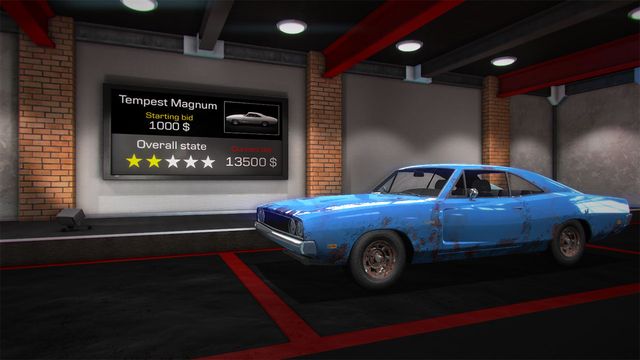