Back In 2009 Psyonix studios released a PlayStation 3 title known as Supersonic Acrobatic Rocket-Powered Battle-Cars (Teenage Ninja M… sorry) that met with a lukewarm reception at the time. The fusion of sports and toy cars had some charm to it, but ultimately fell short. This year, the developers decided to tackle the idea once more with Rocket League, available for free to subscribers of PlayStation Plus or priced $20 for the PC edition. Since I had the chance to play the SARPBC (well, that helped…) - and was promptly unimpressed - my expectations of Rocket League were… modest. It took the game 5 minutes to make me utterly change my opinion. That’s how long it takes to play a single match. I’m a fan of Soccar now and I wonder: why is this idea so much fun and why it wasn’t the last time I’ve seen it? 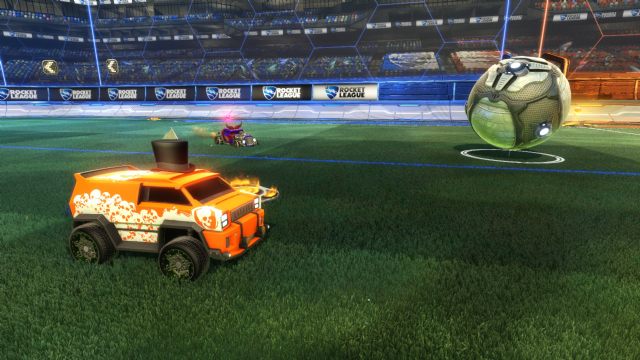 Rollout? Kickoff? Why not both?

Press B to boost, press forward to score

Rocket League is basically a sports game where two teams try to score by getting the ball into the opposing team’s goal. To play, you need to have: a spherical ball, two goals and a variable amount of cars equipped with boosters. That’s right, toys instead of boys (or girls, for that matter). The cars may have different shapes, colors and ornaments, but are equal in terms of performance and abilities. You can, obviously, drive them and perform quick turns using the handbrake, but every car (ok, most of them) can do that. Most of other cars, however, can neither boost while jumping in midair nor can they flip at will. The boosts are located around the stadium allowing for a refill, in case you run dry. Another crucial trick to make the ball roll the way you want it to are the double jumps – the first jump gets you off the ground while the second one gives you the altitude and enables to make a quick flip midair. With careful timing, favorable conditions and a bit of luck and skill you can send the ball in the right direction. Unfortunately, the ball often ends up heading anywhere but there (with a strong tendency towards the worst possible option - your own goal). 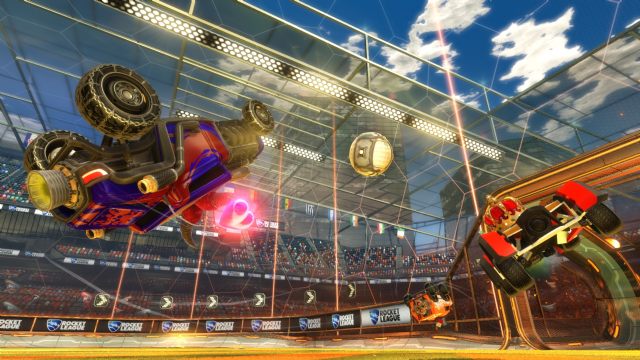 Question: Since it’s apparently a sports discipline, are there any rules I should be aware of? Not really. It’s “anything goes” around here. Thus, I wouldn’t count on the referee if someone decides to smash into you in the spur of the moment. Additionally, there are no out-of-bounds areas on the stadium. Oh, and I just remembered; the matches do have some rules after all. Rule number one: every time a team scores, the game is restarted from the center spot – that’s where the ball possession gets decided so don’t skimp on boost while you’re there. Rule number two: the match won’t end as long as the ball stays in midair inviting the players to desperately struggle for an eleventh hour draw. Rule number three: there are no draws. If the match ends in a tie, you play the extra time during which the “golden goal” rule applies – the first team to score, wins. To sum it all up, we may have switched boots for tires and dribbling for drifting, but the spirit of football remains mostly intact. 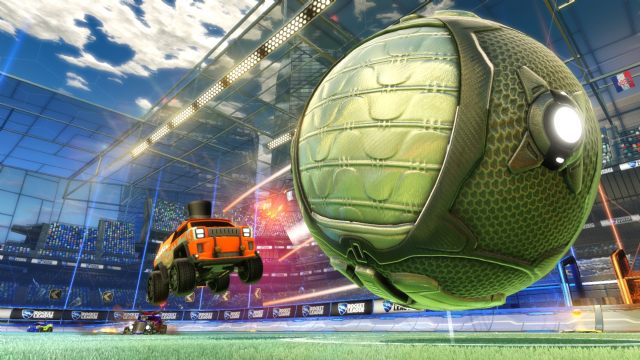 The gentleman here is about to score.

The truth is… there’s actually no point in explaining to you how to play Rocket League. I could have, theoretically, skipped that introduction because the controls are simple and you’ll catch on instinctively, if you ever happened to have played any other computer game. It’s one of those games where you just launch it, give somebody the controller and say “here’s the accelerator, here are the brakes” and then you proceed to have some delightful fun. The players don’t have to spend time on getting the hang of it and can go straight for the essential part of Rocket League – having fun with a physics based sports game. The physics may seem inaccurate at times, but it gets the job done, offering you the enormous joy of watching your wacky stunts. Wall driving, desperate lunges at the ball, jostling with other cars – every match I played produced the quantity of emotions reserved for the best sports games on the market. Wonderful gameplay, heaps of fun and actions to be remembered, that’s how I see it.

According to our users, Rocket League for PC was a disappointment - the expectations before the release were higher than the current average user score.