The decision to make the 2012 Syndicate into an FPS turned out to be a big disappointment, especially for Mike Diskett – previously a programmer at Bullfrog, who worked on both the 1993 game and the 1996 Syndicate Wars. It was this decision that led to the idea of making an actual remake of Syndicate – an RTT (real time tactical) game, starring four agents as characters. Together with some veterans of the industry and a budget gathered on Kickstarter, the newly-founded indie developer 5 Lives Studios created Satellite Reign – a spiritual successor to Syndicate in virtually anything but the name. 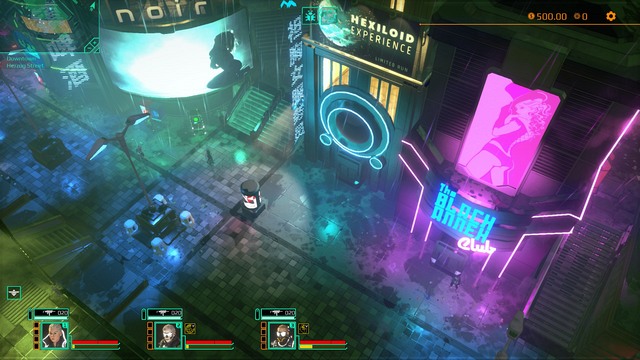 Satellite Reign takes us to a cyberpunk megalopolis, one that looks exactly like in the cult movie classic – the Blade Runner. The night is drowned in billboard neon lights and rain, the streets are full of futuristic vehicles, and the Asian stands most likely sell the same ramen Harrison Ford would order when he played the character Deckard. The power to rule rests in the hands of powerful corporations, so do the private armies that patrol the streets while the citizens are under constant observation from drones and security cameras. This is where we come into play – a small, secret organization dedicated to strike at the heart of the biggest player in the city and to overturn the sustained order, where the rich and beautiful can get anything, including technology granting a second life. The things we have at our disposal: four agents with different specializations, list of objectives to complete as we see fit and the city – vast, vivid and open for exploration.

The city is divided into four districts; each one of them has its distinctive architecture and colors and together they form a convoluted maze of back-streets, alleys, dead ends, and passages so big, that the first thing you do is go sightseeing (and unlocking things like fast travel points). As long as we withhold from using the zoom option, allowing us to take a closer look at the sidewalks – to the point of scratching the asphalt, the streets have a good chance to charm us. The glowing neons and billboards that keep playing short animations are impressive, and so are their reflections on the wet pavements.

Together with the ambient music, the game’s thick atmosphere is convincing enough to ignore the significant amount of copy-pasted objects in the background and the fact that the city has almost nothing to offer, except for the objectives we have to complete. While heading there, we can scan the people passing us by (like in Watch Dogs) or inject viruses into ATMs for some profit. Our agents can enter some of the buildings, but what happens there, stays there – it’s automatic, we have no control or even insight on the action happening inside. 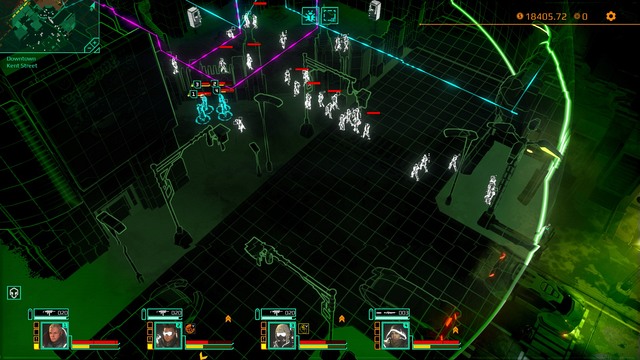 The scan mode will reveal connections between important points in the area.

The tablet mightier than the gun?

Our main objective is the assault on the Dracogenics Corporation HQ. To make such a raid possible, we have to prepare: get edge-tech weapons, gadgets and implants, improving the overall effectiveness of our agents in combat. Most of those can be found in heavily guarded facilities with a strict “no guests allowed” policy. As a consequence, most of our time will be spent on visiting such places in less than legal manner. The nicest thing to Satellite Reign is the freedom we are given to complete our task.We are free to decide which mission we take and how do we achieve its objectives. This includes the usual approach, meaning: shoot while moving from cover to cover, then grab the wares and scram, but finesse is where this game’s really at. When playing as the hacker or the assassin, we are given the options to disable the security cameras or cut the power in the whole facility so we can crawl through the ventilation ducts and hunt down the staff with silenced weapons before they know what hit them – very satisfying.

Each of our agents has a unique set of abilities that can be upgraded as we gain experience or proper equipment (developed in our own lab). This brings us to some things that can widen the range of our activities. Sometimes, to acquire specific information or lab workers, we are going to have to venture into the streets – talk to the locals, grease some palms, deliver a package or crack a data terminal. Such things provide the necessary breathing space during the game, since the vast terrain of operations we are given can cause the missions to become repetitive after some time. Especially in a situation, when every district has an identical set of locations rewarding the player with identical benefits. 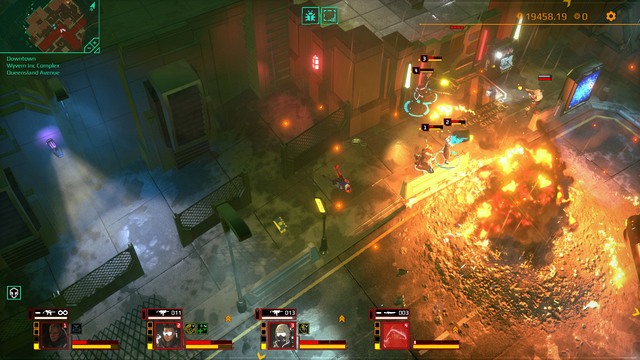 Grenades make quite a mess.

The combat itself looks great – the characters frequently reload their weapons and hide behind various objects (cover mechanics included) - and so does the AI; it can call for additional help and react when the player does something suspicious. If we are seen tampering with public property or entering a restricted area, albeit with our weapons hidden, we will be first checked for verification. Our agent will slowly raise his hands and kneel. As long as we don’t run or start shooting, the event will end with a reprimand, a bribe or, in the worst case, a swift kick in the rear that will get us off someone’s lawn.

What bothered me in combat was how time-consuming the firefights are – enemies’ health bars disappear way too slow – every shootout with a few grunts required several magazine reloads. We don’t have a shotgun that makes short work of everyone, like In the first Syndicate. The sniper rifle could use a longer effective range. There were many times, when, during a shootout, the enemies appeared in numbers that proved to be too many for my four agents. When faced with such a situation, we have two choices: load the game or let the agents die. Surprisingly, the second option can turn out to be the better one, maybe because of someone’s oversight, I don’t know. You see, as I standard, our dead agents respawn in a safe place outside of the restricted area; if the only thing we have left to do is the evacuation, the game will recognize our respawn as a successful escape and mark the objective as completed. Be it a bug or a feature, it’s handy; instead of shooting your way through drones and soldiers, you can just let it go. If it’s the latter, perhaps a patch will take care of it sometime in the future. 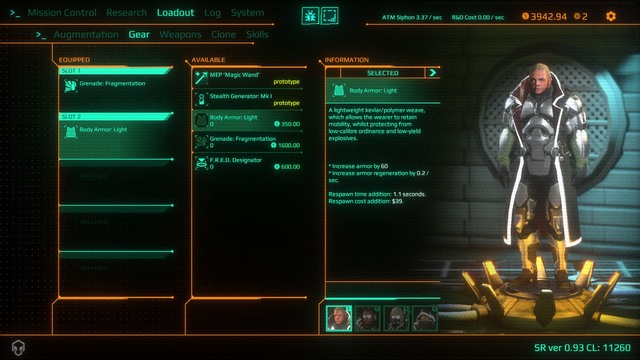 Every agent can be equipped with any set of gear.

The plot and narrative can disappoint or earn some points for remaining true to the old gaming ways, it depends. There are no characters we can like or hate, no plot twists, spectacular cutscenes or dialogues – it’s an indie game, after all. Everything we know, we know from mission briefings or logs found throughout the city, containing documents or e-mails. Comprehensive reading is what gets you information in this game and is the only way to see the full picture of the setting.

However, if Satellite Reign manages to hook you on its atmosphere so that you’ll want to read everything and see everything, its creators will reward you with a hefty number of Easter Eggs. You will find references to Blade Runner, the character of Rick Deckard, The Matrix and some other, less known cyberpunk classics. The biggest fans of the MS-DOS based Syndicate will notice more than the game’s concept in general; there’s the ammo pickup icon, research progress chart or the possible emblems of our organization – everything looks exactly like 20 years ago. In one of the missions you can even find a tribute to the creators of the original Syndicate – Peter Molyneux’s Bullfrog. 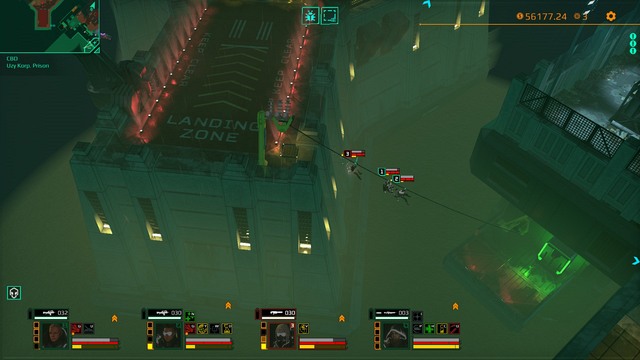 Satellite Reign is a very solid game with few small drawbacks. The degree of control we are given over our agents, the loud/stealth combat system, the huge, visually pleasant city and magnificent cyberpunk aura – that’s more than enough to convince anyone waiting for a new game from The Witcher’s devs or the new installment of Deus Ex, starring Adam Jensen. The 5 Lives Studios have shown us how to treat a legend – an old gaming classic. Their vision, true to the original as it can ever be, together with good and fresh mechanics form the perfect combination – one glance, that’s enough for a Syndicate fan to find the same spirit in Satellite Reign.

According to our users, Satellite Reign for PC was a disappointment - the expectations before the release were higher than the current average user score.