The Banner Saga is a bold mixture of a text-and-picture RPG and a turn-based strategy, set in a world inspired by Nordic mythology. The first part of the series earned recognition among the players with its great atmosphere, interesting storyline, and great graphics, but most of all the breath of fresh air it brought. The premise for the sequel probably went along the lines of “if it ain’t broke, don’t fix it”; the devs left most of the mechanics untouched, and instead focused on expanding the story and designing new locations in this fantastic universe. Did they chose the right path?

WHAT IS BANNER SAGA ALL ABOUT?

The world in Banner Saga is a cold, northern continent, inhabited mostly by humans and the enormous Varls. Once conflicted, both races are have been living in peace since the time they had to unite against the stone Dredges – creatures of the darkness that came out from the underworld when gods have turned their backs on the world. It was only thanks to the heroic efforts of the warriors and the magic-wielding Menders that the threat was repelled, and a long era of peace began. Yet strange things started to happen again right after the beginning of the first part of Banner Saga. The Dredgers appeared once more, raiding towns and villages, but what’s probably more unsettling was the fact that the sun stopped its course on the horizon. Now the day never becomes night. Exiled from their homes, people are traveling in search of safer places, and the titular clan banners flutter above their caravans.

A tale of a depressed Viking

The story of Banner Saga 2 begins right after the grand battle of Boersgard, picking up exactly where the first game left off. Since the odd and eerie events didn’t stop for a second – actually they’ve grown even more frequent – the world is heading towards big-time chaos. Yet again, we must assemble our fellow clansmen and embark on a perilous journey. The story, much like in the original game, has been divided into chapters in which we follow intertwined stories of two caravans. We’re able to import saved games from the first installment, so the decisions that we had made will have impact on the composition of our band and the events of the sequel. 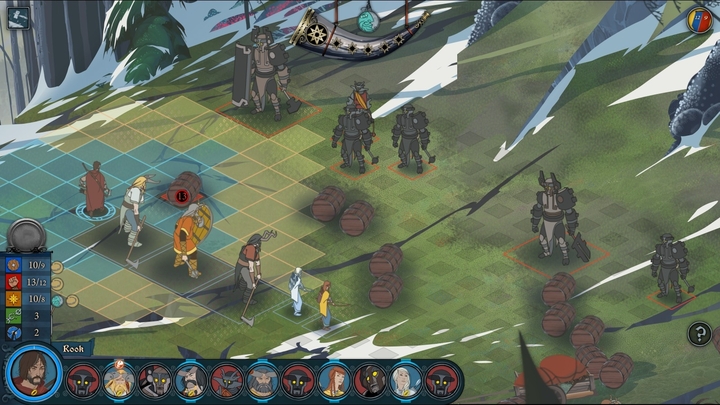 The story of Banner Saga 2 is admittedly pretty twisted, even for the standards of the genre. It actually comes as a surprise that the devs managed to rein in such a dynamic and abstract story while maintaining its mature character. The writers surely let their imagination wander freely – the trail of the caravans takes us not only to snow-covered mountains, but also vast steppes, a magical forest, and underground tunnels. During the journey we encounter mythical beasts, the party members are haunted by confusing dreams, and some really peculiar things happen to the world around us. As the atmosphere grows heavy, new mysteries appear, and the threads that we thought have been tied once and for all will come back, making the whole picture look even more fuzzy. The story is fast, climatic, decadent, and much better than in the first production. Unfortunately, the very end of the game was really disappointing. The final battle is a joke, since its outcome doesn’t impact the ending in any way. The epilogue leaves us with more questions than answers, evidently foreshadowing the third part. I don’t know how many players are going to take the bait, but I am certainly in hook, line, and sinker. 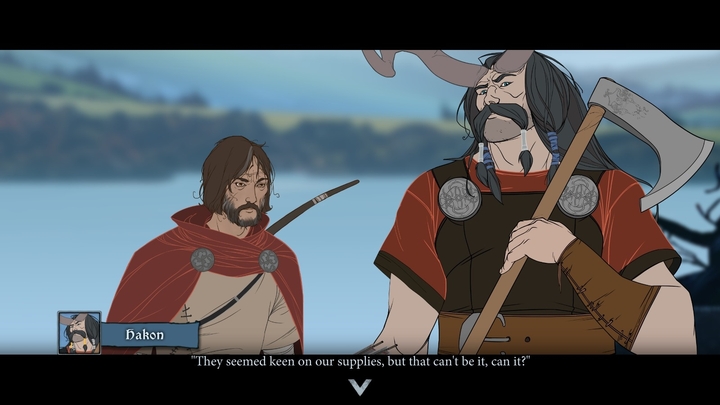 We’ll meet many old friends from the first part.

In The Banner Saga 2 we learn the plot mostly by dialogue and written messages. So far there are no localized versions of the game, and it seems it will stay this way. It might be a problem for those less fluent in English, as the production uses a rather rich, varied vocabulary. 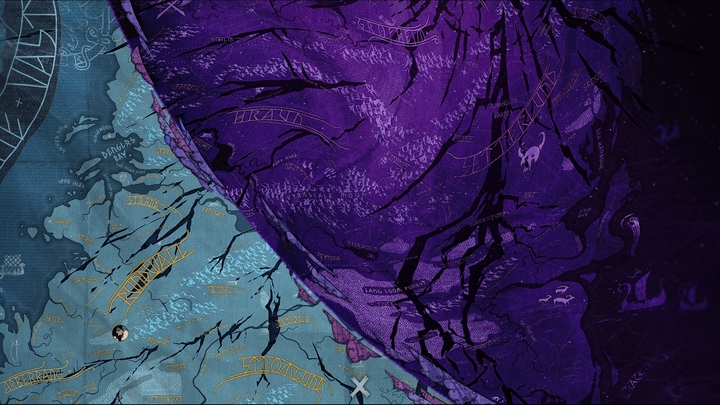 The graphics were already pretty impressive in the first game. Here, they are perfect. After seeing the landscapes and the backgrounds, I am convinced that the guys working on the visuals at Stoic Games could draw town screens in Heroes of Might and Magic, and they would do it better than anyone so far. The Banner Saga 2 proves that using the simple formula of cartoon-like environments can bring out more atmosphere that the extensive use of special effects. 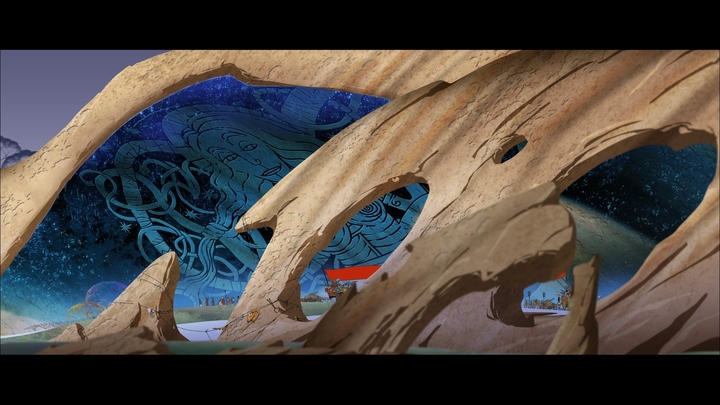 One of the places of worship of the old gods.

There are many elements contributing to this terrific end result. First of all, it’s the way the developers managed to juxtapose colors. They’re not afraid to experiment, at the same time maintaining a great balance between them. The levels are cleverly designed and made with great care. The abstract, minimalist objects found from time to time – such as scarce vegetation – perfectly complement the classic feel of the dominating part of visuals. 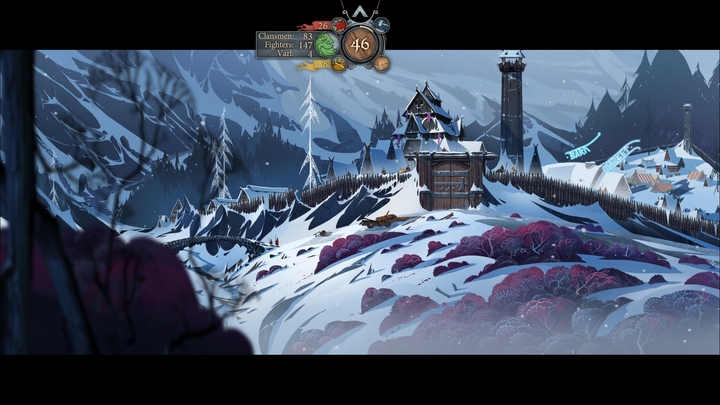 And then there are the final touches. Blurring filters and the falling snow give the locations an impressive depth. Too bad there aren’t many scenes that show the characters in different dynamic situations. Those that are there look amazing; more of them could replace some of the bland prompts and static conversations. I ought to mention the music, too, which indeed was superbly matched with different events taking place on the screen. 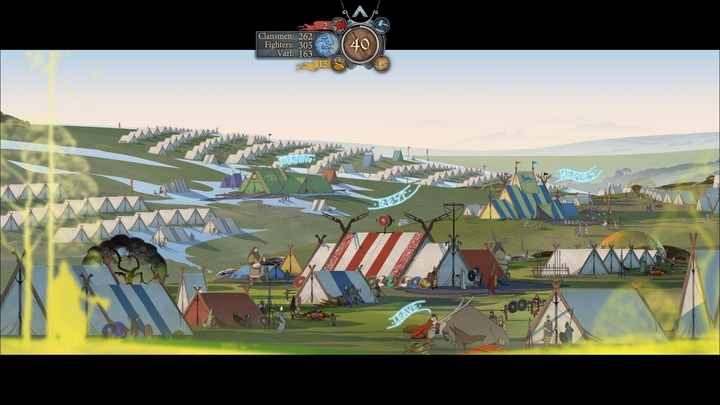 Steppes are a welcome change after the snowy summits.

Engine in need of repairs

The mechanics, on the other hand, can’t keep up with the quality of the storyline and the aesthetics. The weakest link here is the caravan management system. It’s rather inconsistent and gives too little in return, considering the time that we have to invest in it. When the first game came out, people were complaining that the condition and numbers of our clan had no impact on the way the events unfolded. Unfortunately, not much has changed since. Even losing a considerable number of people, be it the outcome of a hasty decision or failure to provide enough food, isn’t a problem at all from the gameplay’s POV. Strangely, it’s quite the opposite, as it allows us to spend the Renown points on our team instead of buying food. 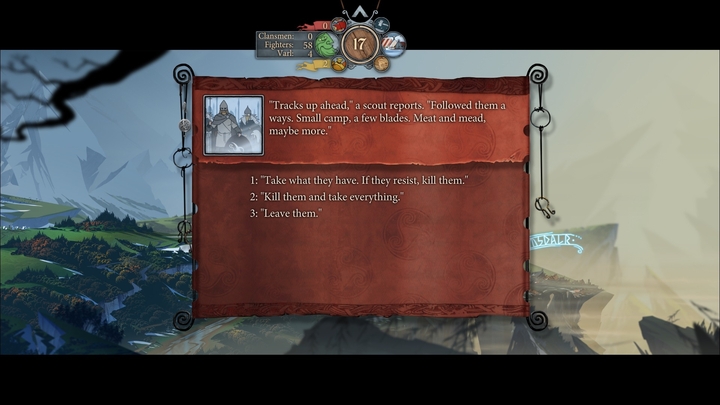 Random events don’t introduce much into the plot.

The random encounters that happen every now and then during our travels aren’t too interesting either. Their descriptions are sometimes quite witty, but being one-time events, they don’t introduce any side-quests into the story, which could work well for diversifying the experience. What’s more, the results of the decisions we have to make during those events are almost always one of the following: gain/loose supplies/caravan members; fight a small battle. It soon becomes simply irritating that the game halts so often just to have us read some irrelevant information.

Fortunately, the turn-based battles taking place on tiles are a different story. In spite of simplistic rules governing the fights, the variety of enemies, heroes and their skills creates many different and tactically interesting situations, becoming a real asset of the game. Sadly, they are also subject to the same issue as other elements of The Banner Saga 2, as even losing many upon many battles doesn’t really mean serious trouble in the main gameplay. Here, more shortcomings of the production come out, since the difficulty levels are not what you would call “well-balanced”. Most of the battles on the normal difficulty setting are so simple that we can win them without coming up with any sophisticated tactics. The hard level, on the other hand, can prove too difficult for many players, even more so because of the already patchy caravan management system. The final battle is disappointing as well, as it doesn’t resemble any of the battles fought prior to it – it’s more of a game of cat and mouse. 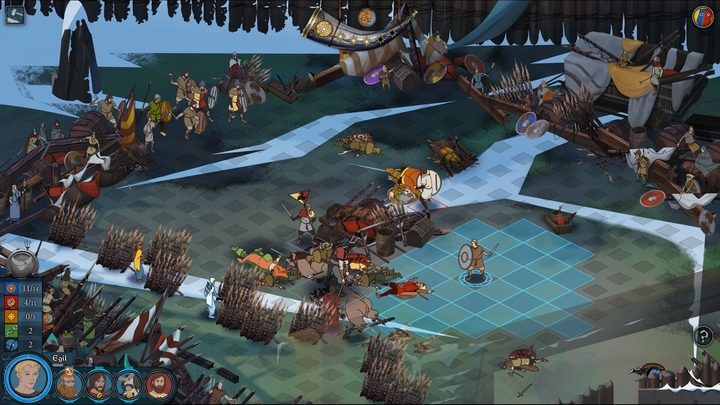 For a text-rich RPG, The Banner Saga 2 has a pretty good combat system. We face our enemies on arenas build of square tiles. Teams consist of several to dozen warriors. Each of them can move by a predetermined number of tiles, and then attack or use a special ability. At the heart of the system lie two factors: strength and armor. Strength is both the unit’s health and offensive capability – if it reaches zero, the wounded hero will fall. The armor prevents them from losing strength. When attacking, you have to decide which of those attributes you want to reduce. An additional aspect is provided by will points, which can boost attacks or increase range of movement. The characters are very diverse in terms of base statistics and special skills. That’s why we’re able to resort to many different methods. Too bad that the outcome of the battles has no impact on the turn of the events. Side note here: if you’ve grown fond of the combat system of Banner Saga, give a try to Banner Saga: Factions, where you can compete online with others.

I’ve never been a fan of preferential treatment of indies just because they are “alternative” or “original”. Still, The Banner Saga 2 is so fresh and climatic, and driven by such an interesting story, that even the defects that weren’t mended since the first game were not able to spoil my very positive impressions. I hope that when the time comes for the devs to work on the third part, they will pay as much attention to the mechanics as they have to the story and art of the first two games. After all, the good graces of gamers are as unstable as a banner on the wind.

According to our users, The Banner Saga 2 for PC was a disappointment - the expectations before the release were higher than the current average user score.