All that glitters is not gold

The way the story is conducted, the narration, the setting and the story  you can sing praises about all of those for days, because all these elements were combined thoughtfully, coherently, and end up giving tons of fun. But, as we know, perfect games don't exist, and it's no different in this case. The main issue is probably the inconsistent framerate. I usually connect my Switch to the TV, and at first, I thought this was the reason for the wavering performance. So I switched (hehe) to the mobile mode, and... it didn't help one bit. Dropping framerate usually happens out in the open world, in locations that stress the CPU, such as swamps. This doesn't spoil the fun entirely, but I was taken aback by such sloppiness in a game like this one. 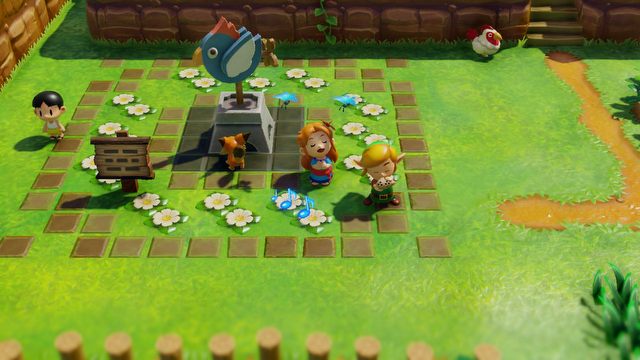 Marin is the "sort-of Zelda" of this game. We can play some ocarina to her.

The second issue is control. Eight-directions analog is not really what we expect from modern games. Also, the fact that transitions between directional animations are virtually non-existent makes it look pretty clunky, and is, in my books, a bad oversight. Even more so because it sometimes prevents the character from moving in the desired way, sometimes costing health points, or even life. For example, running/attacking can only be done in four directions, which doesn't help when we need to react quickly. It's hard to tell whether this is some residual constraint from the original, or just a design laxity. 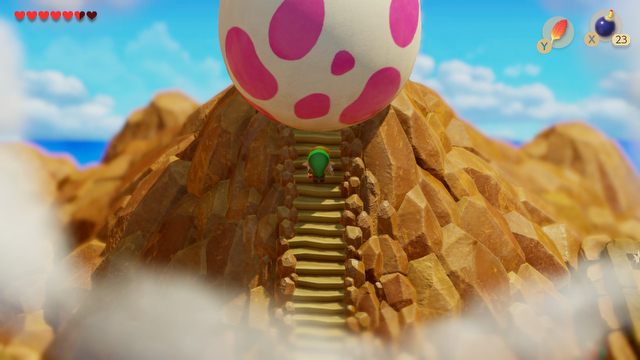 The big egg on the summit hides a big surprise.

The prompts informing every time about picking up power-ups were also quite irritating. This is perhaps the most old-school mechanic in the game. A few seconds of waiting cause short, but annoying pauses, which eventually led me to avoiding the power-ups altogether.

At the beginning of the game, we can choose one of two difficulty levels: Normal and Hero. I chose the former, but found it too easy after defeating a few bosses. Its worth keeping this in mind before starting a new game, although it's true that boss fights have never been particularly difficult in any game in this series.

The Legend of Zelda: Link's Awakening is another fantastic game from the acclaimed series, which is at least worth checking out, and may just become a mandatory position for Nintendo Switch. There's a great dose of respect towards the original, and still, the game doesn't seem outdated. Sure, some mechanics have become obsolete, and there's no way they can pass off as enjoyable even with the benefit of calling them oldschool. Still, the delivery in broader terms is so good that  as it's often the case with Nintendo  we're mostly willing to turn a blind eye on many shortcomings  and only the biggest nay-sayers will really complain. 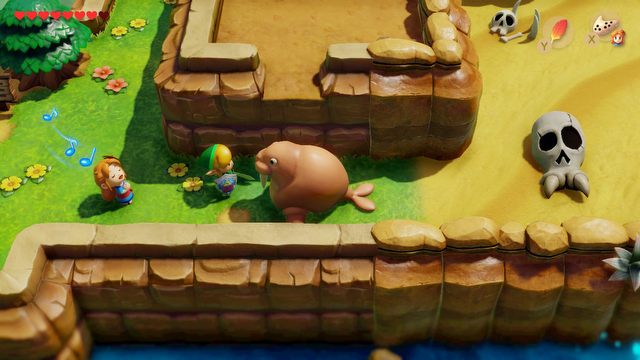 For many people, this will be a completely reinvented game. It's even possible the game will be more enjoyable to all the people who never played the original. I assume many people my be disappointed with the graphics, which do look rather "plastic." Shaders have been overdone, making the whole game look a bit infantile (even for the series' standards). However, if you manage to overcome the initial reluctance, the game will more than make it worth it. Link's adventures on Koholint offer heaps of fun, even without the whole mythology we usually associate with the warrior dressed in green. If not for the technical shortcomings, the final score would be higher by 0.5.

I love the Legend of Zelda series, but it was my first time with Link's Awakening. Because of that, I spent a lot of time on a rather thorough exploration of the world, looking for secret passages and other surprises. Finishing the game therefore took me about ten hours. Having become pretty familiar with the game world, I'd say you could beat the game in about five hours. Although the game in question really clicked with me, I still consider A Link Between Worlds for Nintendo 3DS console the best installment in the series.