After a long wait, there is finally another Legend of Zelda adventure to play on the Switch. Sorry, it’s not the sequel to Breath of the Wild yet, you’ll still need to be patient for that. But to keep you occupied for now, Nintendo has released The Legend of Zelda: Skyward Sword HD. This game arrives on the Switch a full decade after its original release for the Nintendo Wii and Wii U.

The game has been graphically remastered, and the controls have been completely remapped to even include non-motion control options, something that wasn’t available on the Wii and Wii U. Even if you’ve played this game before, it should be different enough to be worth experiencing again.

At the time of its original release, Skyward Sword got perhaps some of the more mixed reviews of any major title in the Legend of Zelda series. Now it has to share space on the Switch with arguably the best Legend of Zelda game of all time, while the sequel is also well on its way. Can this ten-year-old game still hold up? Is the jump to HD enough?

To Swing or Not to Swing

The Nintendo Switch console certainly does not have the same focus on motion controls that its predecessors did, but it is still solid. There’s no denying how intuitive it feels to swing a Joy-Con and see Link swing a sword in the same direction. This version of Skyward Sword also adds a quick adjustment button; simply press “Y” and the motion controls will center on the direction you hold the controller. This can be a life-saver, especially when aiming something like the slingshot or the bow and arrow. 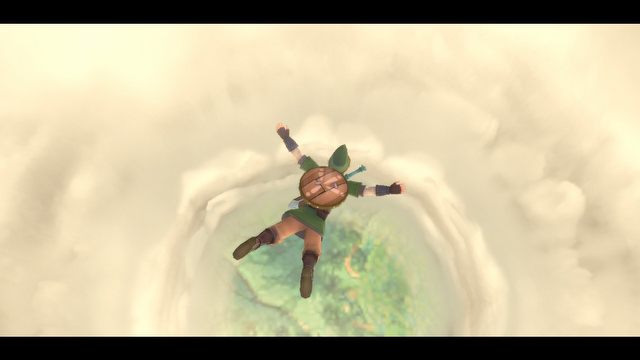 The button controls are a lot less intuitive, but they are a nice alternative. The camera is more of a hassle to control, and the flicking of the control stick to swing the sword certainly takes some getting used to, but the buttons do have their advantages. For example, flying around Skyloft with the Loftwing is much easier with button controls than motion controls. Since this is a major exploration tactic, and one of the main distinguishing factors between this game and others in the series, it is kind of a shame that motion controls make it so difficult.

Thankfully, it is also very easy to swap control schemes. Of course, it would be better to not have to swap at all, but at least it is simple. If you are having trouble with a certain task or puzzle, a quick swap to button controls could be just the trick, or vice versa.

The Jump to HD 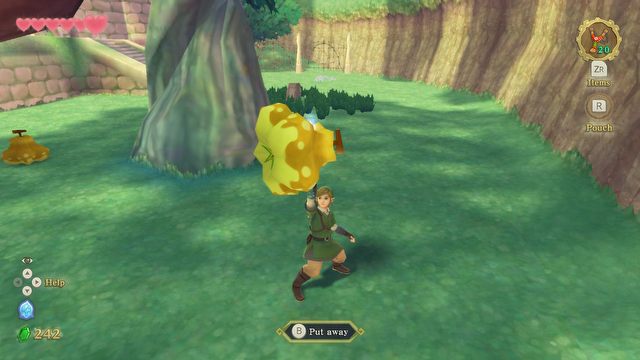 With all the recent rumors of a 4K Switch seemingly put to rest for now after the reveal of the OLED Switch, it almost seems like a pointed joke for the Skyward Sword remake to simply be titled “HD.” However, there is no denying the graphical improvements from the original. It is incredible how clear and crisp a ten-year-old game can look. This is especially important when Skyward Sword now has to compete with more modern Switch games.

Thankfully the game still retains its original art style, keeping itself distinct and immediately recognizable from other Legend of Zelda titles. The world and the characters are colorful and even cartoonish, but still somewhat muted, making it almost like a stepping stone between Windwaker and Breath of the Wild in terms of visuals.

Despite the age of the original, Skyward Sword HD still manages to feel like a modern game. It may not have an open world, but it does still have some impressive locations that deserve to be explored. The puzzles and the combat also still manage to challenge the player, building on each new tool or discovery. 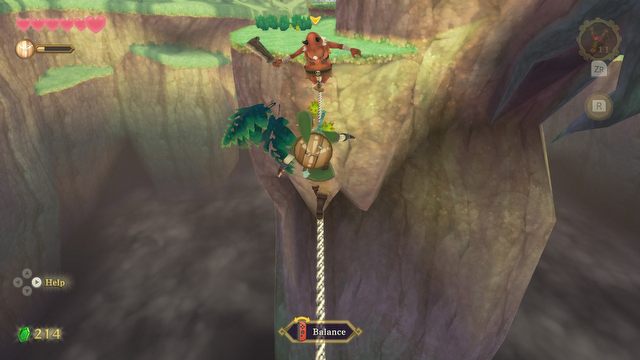 Regardless of how you feel about Skyward Sword, there is no denying that it has played an important role in the Legend of Zelda series. Canonically it is the first game in the timeline, meaning that this story is the first time that Link and Zelda become the legendary heroes. Following the story of Skyward Sword can give you more of an appreciation for the rest of the series.

One of the most iconic items in Breath of the Wild, the Paraglider, was clearly inspired by Skyward Sword’s Sailcloth. In this game, Link can also use his sword to “dowse,” making it easier to find certain objects or people. This might remind anyone who’s played Breath of the Wild of a certain beeping radar that comes with the Sheikah Slate. This was also the first time that durability on shields was introduced, which then of course became an important factor for weapons as well. 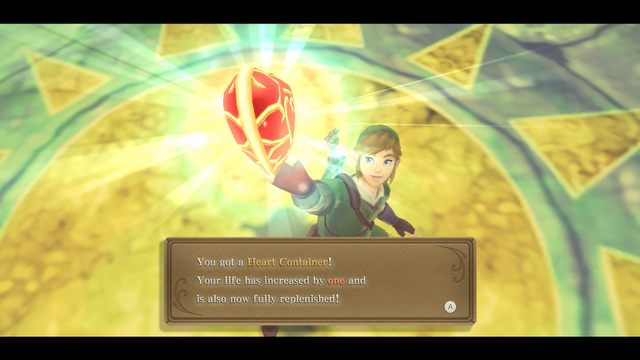 Link is even able to mark locations on the map that then appear in the real world as glowing columns of light, which has become an important exploration tactic in Breath of the Wild. In fact, there’s so much in Breath of the Wild that builds on what Skyward Sword introduced, it makes sense that this is the second 3D Zelda game to come to the Switch. Perhaps Nintendo wants more players to experience the game that has and will continue to inspire Breath of the Wild and its upcoming sequel.

Of course there is one major difference with these games. Skyward Sword does not have the pure freedom of an open world. Link must follow a relatively linear path through the story, with some room for exploration in certain areas, but not much. Some areas of Skyward Sword can just feel like a big shrine from Breath of the Wild.

Having an open world doesn’t necessarily make a game better, it just changes the experience. Breath of the Wild is all about exploration and finding your own way, the story is optional. Skyward Sword puts the story in the forefront, which forces wandering and exploration to take a back seat. But that doesn’t mean there won’t be new things to experience. 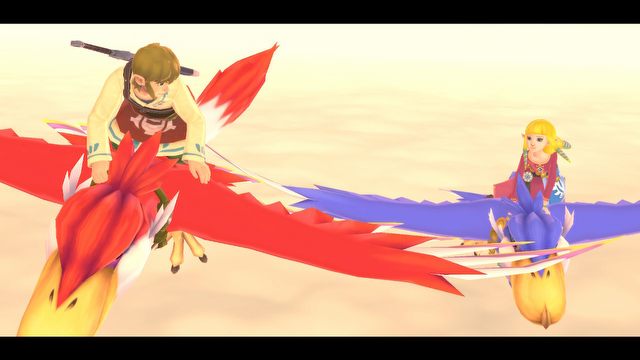 Skyward Sword might have a more linear story and more boxed-in maps, but there are still a lot of unique ideas to experience that even a vast game like Breath of the Wild doesn’t have. In fact, with the Breath of the Wild sequel on the horizon, it’s possible that some of these features might find their way into that sequel somehow, continuing Skyward Sword’s legacy. 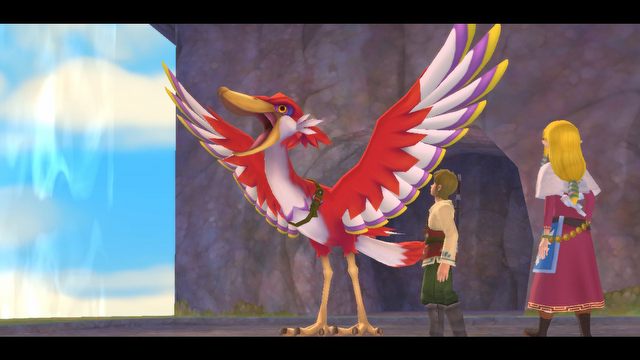 Right from the beginning of the game, there are the Loftwings, which are the most unique and iconic feature in Skyward Sword. If you are unfamiliar, the Loftwing is a kind of giant bird that everyone uses to get around. You can use your Loftwing to explore the areas around Skyloft, which is about as close to open-world freedom this game gets, and a major highlight.

Link also has some great tools that never make an appearance in Breath of the Wild. There are simple weapons like the slingshot and the whip, and more complex items like the mechanical Beetle and the Clawshot. If Breath of the Wild has been your only Legend of Zelda experience lately, there’s a lot more to experience here. 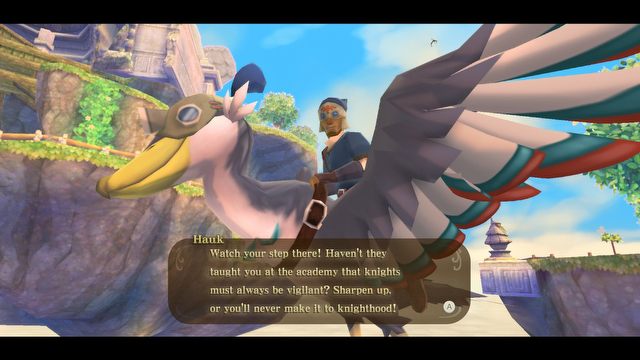 While it may not have been everyone’s first choice for a Switch port, Skyward Sword HD is a fun and engaging game. It is difficult to compare any game to Breath of the Wild, so it has its work cut out for it by being a part of the same series.

If you haven’t played it previously, it’s a great game to explore and distract yourself until the next Zelda game comes to the Switch. If you have played it before, you’ll likely appreciate the enhanced graphics, and maybe enjoy trying the game out with button controls.

Skyward Sword HD certainly has its quirks, and it’s not perfect, but for fans of the series it is a faithful and well-improved remaster that will remind you how much you enjoy the older Legend of Zelda games. If all you’re looking forward to is the next Breath of the Wild, it could be worth taking a look, because there are a lot of great experiences and potential additions that might find their way into the next game. Not to mention that a more story-focused game might give you more of an appreciation for the hidden corners in Breath of the Wild.

According to our users, The Legend of Zelda: Skyward Sword HD for Switch was a disappointment - the expectations before the release were higher than the current average user score.