What spawned from Tiny Tina’s Assault on Dragon Keep DLC, Tiny Tina’s Wonderlands is essentially Borderlands 3 but with a fantasy coat of paint complete with mages, dice, and dragons. If you are familiar with the series, you will know right away what you are getting into, but don’t expect the same level of storytelling or depth you are used to from a main series staple. Wonderlands may feel like a huge game with lots to do and an amazing personality to boot, but it doesn’t quite capitalize on everything it offers you — and that’s a shame.

A Game Within A Game

The setting of Wonderlands takes place inside a fantasy tabletop game inspired by Dungeons and Dragons but known here as Bunkers and Badasses. The dungeon master here is Tiny Tina, known in past games for her erratic personality and love of explosives. She is joined for a game by her friends Valentine, Frette, and you. These characters will essentially chime in as you play and act as narrator, audience, and instigators throughout your adventure. It’s a cool concept that gives life to your experience and gives the game a very meta feel to it.

This format also allows for a lot of self-referential humor and lots of witty lines that could range from pure hilarity to cringe depending on your taste in comedy. Without question, however, the cast is amazing and truly brings to life every character you interact with, even the ones that are only important for a short side mission. Wanda Sykes as Frette is a comical genius even when not trying to be funny. Dissing and calling a decaying mummy a “zombiotch”? Genius. Tiny Tina herself makes for a very unhinged dungeon master thanks to Ashly Burch’s talent in changing her voice to fit every single mood you can possibly imagine. The cast truly shines and help give structure to the plot. 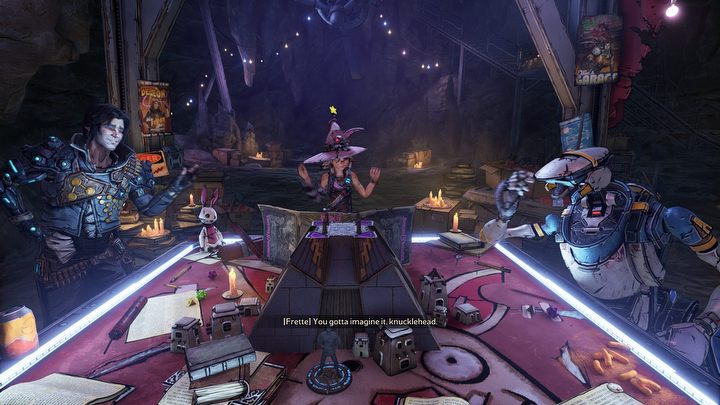 Even the Wonderlands themselves come alive thanks to their fantasy setting which is far more colorful than past games. You will visit places like a magical kingdom to a world set atop a giant beanstalk and see things like a giant ocean be completely drained just so you can get across it. Charming and full of life, each world you visit will definitely impress you and comes complete with some commentary from Tiny Tina and co. Don’t expect them to talk all the time, though, as they stay quiet if you revisit an area after a main mission.

Your adventure begins after the evil Dragon Lord slays Queen Butt Stallion right before you were about to be knighted. Now, if the name “Butt Stallion” doesn’t give it away, Wonderlands doesn’t take itself too seriously when dealing with tragedy or malice. Even the villainous Dragon Lord voiced by Will Arnett doesn’t seem too villainous when making jokes alongside Tiny Tina. This works to keep you smiling, but it also makes the game’s plot and the main missions you will undertake seem less gripping than in past Borderlands games.

Gameplay, however, is very much like that of Borderlands 3. Progressing through the game requires you to complete main missions but with a fantasy twist. You will need to clear out an area filled with zombies, rescue a troll who has been kidnapped, or take down a poisonous mushroom monster standing in the way of that mission’s goal. The stories that lead up to these missions are unique and sometimes contain enough substance to keep you entertained, but after a dozen hours of the same old format, things start to get stale.

What also slows the game down is that your world is split into two parts: first-person shooting and third-person exploration across a giant tabletop map. The latter is how you will complete a majority of your quests and will lead to areas where you need to complete objectives to earn XP and lots of loot. The overworld map, however, is a nice touch that makes you feel like you are playing on a stylized game board, but limits your freedom with prompts that tell you that you are too underleveled for a particular area and suggest you do some side missions to level up. 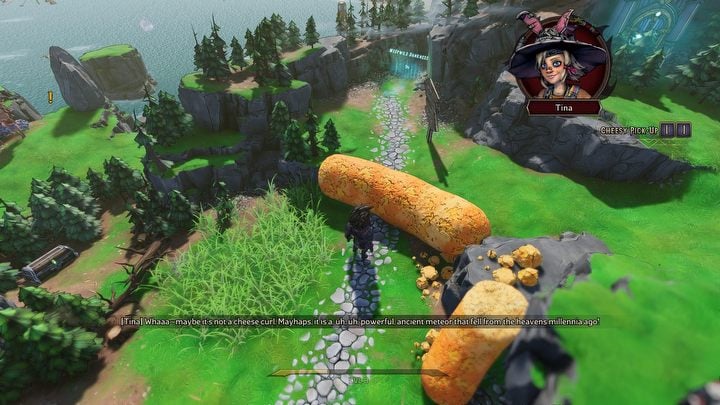 This happens a lot in your 20 or so hours with the game and it forces you to locate things to do to level up. Sure, these side missions aren’t too difficult and don’t often require much besides just killing enemies, looting, and getting to the next checkpoint, but this is basically the gist of the game and you will often be doing these missions simply just to level up. It’s this repetition that leads to Wonderlands feeling like it is purposefully stretching out your playtime so you feel like you are doing a lot when it’s really just stalling.

On paper, Tiny Tina’s Wonderlands seems like it would be a great escape from the usual looter shooter game fans have come to know over the years. As a Borderlands game, it delivers one of the best RPG experiences to date with plenty of customization options and loot to discover. Its pacing, design choices, and repetitive structure, however, hold it back from being so much more than just a fantasy spin-off.

What’s also annoying is that the overworld has random encounters that will occasionally pop up in grassy areas forcing you back onto a first-person playing field to take down these enemies before moving on. There’s a lot of back and forth between first-person fighting and third-person exploration that it breaks up a lot of the action with loading screens and spawning that you’d wish it was just one congruent experience. It’s a nice touch to walk around the overworld map and see real-world items like bottle caps, cheese doodles, and a can of soda adding to its whimsical landscape, but the overall gameplay design just drags you down.

Wonderlands’ core gameplay is just like past Borderlands games except this time each character class can equip magic spells you loot along the way. At the start, you can customize your character and pick a class that excels in frost, fire, or lighting damage, each with differing stats to offer you some variety in combat. You will essentially still be shooting things down with assault rifles, snipers, and even rocket launchers, but the game also introduces crossbows and plenty of swords and hammers to loot. Melee attacks work more effectively to clear out groups of enemies that close in on you, but guns are still your best bet when it comes to doing lethal damage. 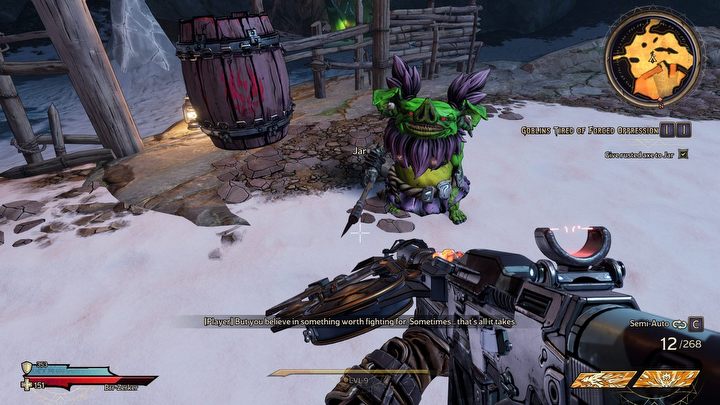 As you level up, you can increase your own stats or class-specific buffs along the way, but you will eventually be able to take on a second class as well. This lets you sample from two skill trees to create a more diverse character, and considering how many spells, weapons, and accessories the game has to offer, chances are you won’t have the exact same build as someone else if you decide to play it co-op. These choices are more important when you play the post-game Chaos Chamber challenges which see you taking on countless dungeons to earn loot and gradually increase the overall difficulty. However, like the rest of the game, this gets old rather fast.

On paper, Tiny Tina’s Wonderlands seems like it would be a great escape from the usual looter shooter type of game fans have come to know over the years. It has enough fantasy and mayhem to create its own world and set itself as a spin-off that could capitalize on everything the original has delivered, but ruins its chances with some questionable design choices that slow down the action and missions that seem more like filler than substance. 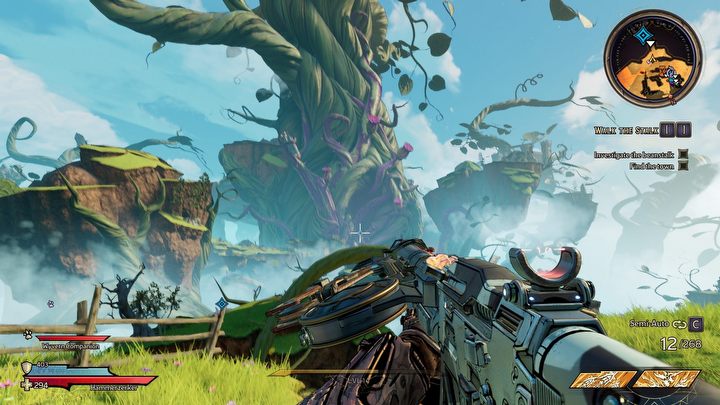 As a Borderlands game, it delivers one of the best RPG experiences to date with plenty of customization options and loot to discover. Your missions will be filled with humor and notable characters to get to know and laugh with. Its pacing, design choices, and repetitive structure, however, hold it back from being so much more than just a fantasy spin-off.

According to our users, Tiny Tina's Wonderlands for PC was a disappointment - the expectations before the release were higher than the current average user score.